To Help Heroin Addicts, Give Them... Prescription Heroin? 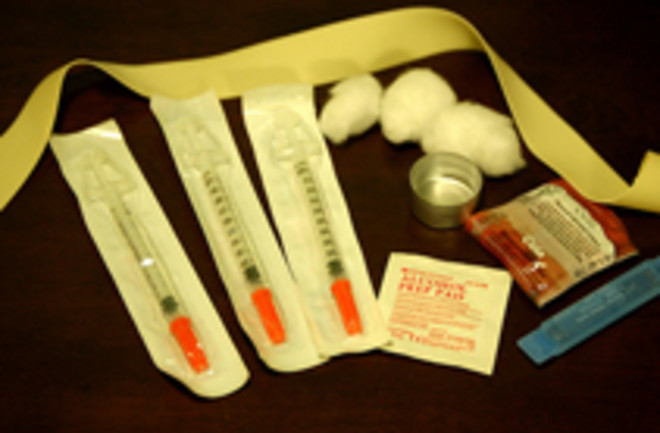 Researchers have found a way to reduce the ill-effects of heroin addiction and to generally keep the addicts out of trouble, but there's a catch: The solution is to give the addicts injections of a pure form of pharmaceutical heroin twice a day. In a fascinating new study, Canadian researchers found that addicts who received the prescription heroin were more likely to stay in treatment than those given methadone, the commonly prescribed opioid that manages heroin cravings without providing the high.

Experts say lengthy treatment is often needed to treat other diseases as well as provide counseling to reverse criminal behavior and otherwise stabilize addicts' lives and improve the chances that they will stop using heroin [The Wall Street Journal].

The study enrolled 226 heroin addicts who had been using the drug for at least five years, and who had failed to stick with a methadone-treatment program at least once. Half the subjects came to the clinic to receive shots of diacetylmorphine—pure heroin—while the other half received standard methadone treatment.

After one year, 88% of those in the diacetylmorphine group were still in treatment, compared with 54% in the methadone group [Los Angeles Times].

The test subjects who received heroin were also more likely to reduce their criminal behavior and their drug use outside the clinic, according to the study published in the New England Journal of Medicine. The study did report some serious "adverse events," which is little surprise when dealing with dangerous drugs and a population that doesn't always comply with the doctor's orders.

One patient from the methadone group died of an opioid overdose during the 12-month trial. But overall, serious adverse events were more than 2½ times more common among the [diacetylmorphine] group. Sixteen of those participants experienced a life-threatening seizure or overdose; all received prompt treatment at their clinic and recovered [Los Angeles Times].

In almost all those cases, the patients later admitted that they had used other substances. The idea of distributing heroin to addicts

remains extremely controversial, but in parts of Europe and Canada policy-makers have gently proposed harm reduction. The idea is that, even if people can't get clean, they could still get help to live healthier and more productive lives, avoiding some of the worst health risks of heroin -- like HIV and hepatitis C, which are both spread through dirty needles -- and eliminating a major reason for crimes like theft and prostitution, used to fund drug habits [Time].

But in the United States, where heroin is classified as an illegal drug with no medical uses, such policies are very unlikely to take hold. In fact, U.S. researchers who had hoped to help with the Canadian study had to drop out because they couldn't get approval from the U.S. Drug Enforcement Agency and the Food and Drug Administration. Related Content: 80beats: Can Erasing a Drug Memory Erase the Need for a Fix? DISCOVER: The Biology of Addiction