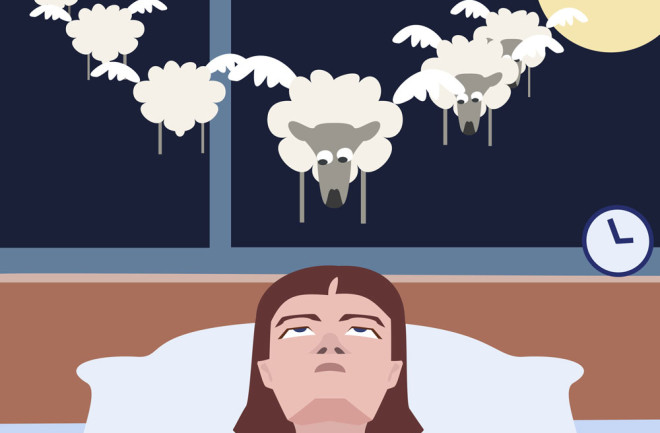 Middle-agers and seniors on average sleep less than younger people, about 6 to 7 hours a night compared to 8 to 9 hours.

But why is this so? And are older people therefore sleep deprived, which can give rise to chronic maladies and speed up aging?

There are two camps on this. One is that older people sleep less because their body requires less sleep. No harm, no foul here. The other is that the hours spent sleeping isn’t the relevant question; what matters is the quality of sleep. And according to a recently published review called “Sleep and Human Aging,” by researchers at the University of California, Berkeley, many older people have unhealthful sleep due to age-related physiological changes. These changes can begin as early as the 30s.

A vicious cycle emerges, the researchers say: The older we get, the more our ability for restorative sleep erodes, which speeds up the aging process.

Sleep deprivation places people at risk for all sorts of maladies, such as cardiovascular disease, obesity, diabetes, cancer and depression. It weakens the immune system and impairs cognitive function.

It is generally accepted that people in middle age and beyond sleep about 1 hour less due to biological changes (not because they are super busy). The 1-hour sleep loss is considered natural and not unhealthy, says Judith E. Carroll, a psychiatrist who researches neuroscience and human behavior at the University of California, Los Angeles.

However, restorative sleep tends to decline with age. “The important point is that the overall need for quality sleep — deep sleep — is thought to remain, even though it is increasingly hard to get as the body ages,” Carroll says.

In their review of the sleep literature, which appeared in April in the neuroscience journal Neuron, the Berkeley researchers lay out how sleep habits change during life.

It begins in the 30s, mostly for men. Delta sleep declines by 50 percent in some men when compared to sleep in their 20s, according to EEGs, or electroencephalography tests. For women, the decline is less but still up to 25 percent. Meanwhile, neurochemicals that switch us from sleep to wakefulness are drying up. This contributes to grogginess during the day and a maddening alertness at night.

Many middle-agers and about half of seniors complain of having trouble falling asleep and waking up repeatedly during the night, sometimes staying up for hours. Though men bear the early brunt of sleep changes, women catch up. Women postmenopause complain of sleep disturbance more often than men of similar age, the researchers say.

Lack of nighttime sleep ushers in daytime drowsiness. Ten percent of people age 55 to 64 take naps during the day, and that increases to 25 percent for people age 75 to 84, according to a 2007 study.

You might say to yourself, “I am middle-age and wake up often at night, but I don’t feel tired during the day. Am I still sleep deprived?”

You might be. The Berkeley researchers argue that the body can grow accustomed to sleep loss and mask the symptoms. Also, the chemicals that normally flag sleepiness are in low supply in older people, a study shows.

“The older adult brain appears to be sleep deprived, but it has fewer active receptors to sense that,” says Bryce Mander, a neuroscientist at UC Berkeley and lead author of the sleep review. “It might be that there is a sleep need, and it’s building and it’s chronic, but the brain is somehow less sensitive to it.”

Joseph Winer, a Berkeley grad student in cognitive neuroscience and a researcher for the sleep review, compares this lack of physiological self-awareness to people with cataracts who don’t notice the subtle decline in their vision. “Getting less sleep is having a functional impact, but it is changing so slowly, people don’t realize it,” he says.

Carroll, who was not involved in the sleep review, asked middle agers to compare themselves to how they felt at age 25. “Do you need more coffee in the morning?” she asks. “Do you feel more tired in the afternoon? Has your overall energy level changed from when you were younger?” If so, this might be a sign of sleep deprivation.

Even if unfelt, the cognitive impairments from lack of sleep are measurable. The UC Berkeley scientists point to studies showing that rested, older people perform worse than younger people on cognitive tests, and age cannot wholly account for the discrepancy. The older people end up performing on the tests about as well as sleep-deprived young people.

What can be done? Given that the condition might be biological, perhaps not much until science comes to the rescue.

Sleeping pills used to be viewed as the answer to sleep problems, but today they are considered sedatives and of limited use. Though the pills can effect deep stages of non-REM sleep, the EEG waves they generate are different from those generated in Delta sleep.

A healthy lifestyle of a balanced diet, regular exercise and ability to manage stress can help. There are also sleep hygiene practices available on the internet.

Here are a few from the National Sleep Foundation:

Of course, people have tried these tips and not gotten positive results. For them, behavioral therapy might be the answer. This entails regular visits to a clinician, who will assess sleep habits, review a sleeper’s diary and offer counsel on behaviors.

But don’t expect a sleeper’s fountain of youth.

“What we can’t say is that these behaviors will make your sleep like it was when you were younger,” Bryce says.