Why Are So Many Anti-Vaxxers in Educated, Affluent Areas?

Studies show that affluent urban areas with high education rates can have large pockets of people against vaccines. Isn't that counterintuitive? 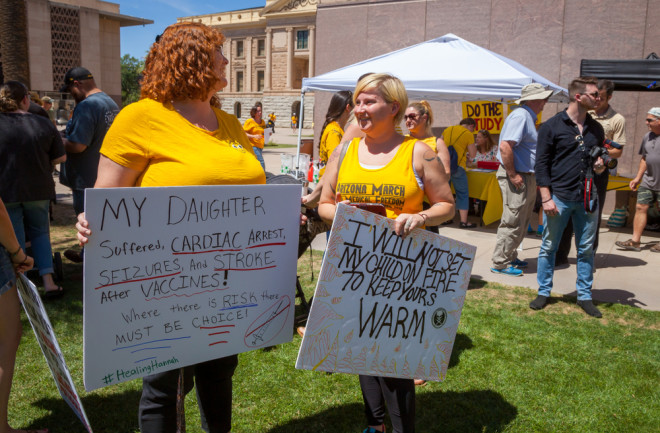 Two mothers holding signs at the 2019 Arizona March for Medical Freedom — a rally to protect rights to make medical decisions. (Credit: In The Light Photography/Shutterstock)

This has been true throughout history. In the 19th century, when the smallpox epidemic was raging across the country, anti-vaccination movements sprang up amongst the educated middle class in cities like Boston and Minneapolis.

It seems counterintuitive. We’d like to think that, along with an education, you gain an understanding of how vaccines work — or, at least, a certain respect for the medical experts who are recommending them. And polls have indeed shown that anti-vaccine views are inversely correlated with education levels.

But according to Peter Hotez, a vaccine scientist and dean of the National School of Tropical Medicine at Baylor College of Medicine, especially in urban areas, anti-vaxxers tend to be more affluent. They also come from regions of the country with the highest education rates, like college and tech towns. These anti-vaxxers have better access to the internet and more time to visit websites and chatrooms that already align with their belief system. Online and in books, they can find plenty of fuel to feed their fire. Amazon and Facebook, says Hotez, are some of the biggest providers of false information and anti-vaccination books.

While Hotez says he’s not a social scientist, and he’d like there to be more research on the subject, studies have shown that these clusters are particularly problematic because they can quickly spread vaccine-preventable diseases, like measles, within closer proximity.

According to Hotez, this powerful anti-vaccination contingent is partially why so many people in the U.S. don’t get vaccinated. For example, he says, the anti-vax movement has released so much false information about the influenza vaccine — claiming that it’s ineffective or even that it causes miscarriages in pregnant women — that many adults are afraid to get it.

In fact, the seasonal flu vaccine reduces your chances of getting the flu by 40 to 60 percent and will keep you from getting really sick if you do get it. There’s also no increased threat of a miscarriage when you get a flu vaccine.

But still, according to the Centers for Disease Control and Prevention, flu vaccination rates among adults last year were just 37 percent, down 6 percent from the year before. And the agency estimates that this year there have been at least 36 million flu illnesses. There have already been over 22,000 seasonal influenza deaths this year.

Unfortunately, facts don’t often create incentives for us to stray from our chosen beliefs. Instead of using our education to identify the truth, we use it to rationalize conclusions that are already accepted by our chosen camp, says social neuroscientist Jay Van Bavel, director of the Social Perception and Evaluation Lab at New York University.

In other words, if your tribe doesn’t believe in getting vaccinated, you’re unlikely to change your beliefs even if they might be inaccurate.

Van Bavel says that humans evolved in small groups and were able to adapt, flourish and take over the globe based on an ability to cooperate with one another. Millions of years later, the groups we identify with are still our most valued asset for survival. Our reaction to certain scientific truths is not so dissimilar from that of politics. We want to signal to the group our cooperation, says Van Bavel. As a result, we’ll defend our camps even if we know certain positions to be wrong or even unethical.

Unlike many other species, there’s no greater punishment than being shunned or ostracized from the group. We’re so attuned to social standing that when we feel alone or separate from our perceived group, it causes changes to our brains. These changes can prompt the body to release the stress hormone cortisol, impact gene expression and even cause our IQs to temporarily plummet, says Van Bavel.

All of the above begs the question: If education doesn’t promote change, what does?

“Fact-checking changes less than 1 percent of opinions,” says Van Bavel. Getting people to go against their chosen groups is a hard nut to crack, he says, because it’s so entrenched in our psyche to fall in line. At least until the threat becomes more personal. “The moment it becomes less abstract — for example, your grandparent dies of the disease — opinions can change.”

Editor's Note: The headline, lead and other details in this story have been updated to clarify that studies have shown that people against vaccinations are often congregated in more urban, affluent, educated areas. This does not mean that those people are more educated; in fact, research shows the opposite. We apologize for the error.