More and more people are singing the praises of eating one meal a day. But is this extreme form of intermittent fasting a healthy and effective way to lose weight? 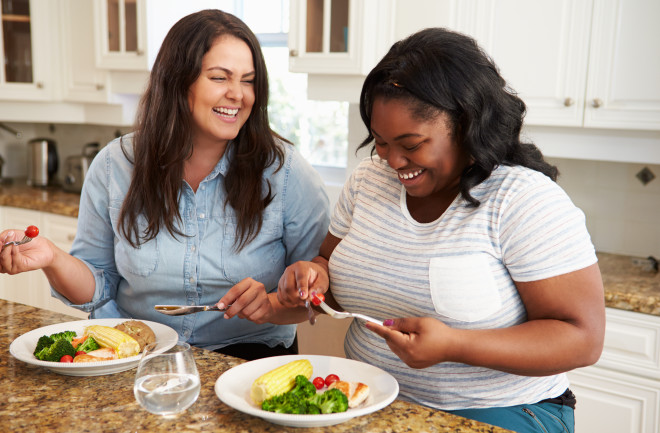 Could you limit yourself to eating one meal a day over an extended period of time? It might sound crazy, but that’s the idea behind a diet that’s growing in popularity. It’s known as OMAD, or “one meal a day,” and it’s an extreme form of intermittent fasting that proponents say delivers weight loss, improved learning and memory, and other health benefits.

OMAD makes other intermittent fasting approaches look pretty wimpy in comparison. Essentially, OMAD is a 23-to-1 fasting-to-eating schedule. So, someone undertaking the diet eats one large meal during a one-hour feeding window. Then they fast for 23 hours without consuming any additional calories — not even from beverages.

While the fast may be brutal, many people still find a lot to like about OMAD. You can eat or drink pretty much whatever you want (even pizza, burgers and beer), and as much as you want, as long you do so during your scheduled mealtime. On top of that, people say OMAD is convenient — you only have to worry about planning for one meal a day. Another commonly cited perk is having fewer dirty dishes to deal with (yes, seriously).

But most importantly, many people on OMAD like it because, for some reason, it’s the one diet approach that has actually worked for them. With this in mind, here’s a breakdown of how OMAD works — and what science says about its weight loss potential.

How Does OMAD Work?

Many popular intermittent fasting plans rely on time-restricted eating, which involves limiting food consumption to a certain time window. The more common variations allow for a six- or eight-hour eating window, followed by a 16- or 18-hour fast.

There’s also alternate-day fasting, which gives people the freedom to eat whatever they want on one day, followed by a fast or calorie restriction the next day. Other forms of intermittent fasting might incorporate only one or two days per week of no eating or significant calorie restriction.

According to Krista Varady, a nutrition researcher at the University of Illinois at Chicago, fasting forces our bodies to rely on our sugar and fat stores first for fuel. But she says intermittent fasting’s success largely relies on something that’s pretty boring and familiar for many who have tried to lose weight: calorie restriction.

“I just think it’s a way to fool the body into eating less, I don’t think there’s anything magical about it,” Varady says.

Another common misconception around intermittent fasting is that it promotes autophagy, or “self-eating,” on a cellular level. The idea behind autophagy is that, when you fast, your body can spend time cleaning up damaged cells because it isn’t busy dealing with a constant influx of food. But this process has never been observed in humans, and scientists don’t even have a way of measuring it in people, Varady says.

How Effective is OMAD?

Although 23-to-1 fasting hasn’t been studied in humans per se, one well-known paper examined a one-meal-per-day eating regime’s impact on weight and other health measures. The researchers wanted to know what would happen if people simply ate a day’s worth of calories during a time-restricted window.

In the study, normal-weight, middle-aged men were put on a three-meal-per-day plan for eight weeks. Then they were switched to an intermittent fasting diet with a four-hour eating window for another eight weeks (with a bit of a break between the stints).

Eating one meal per day promoted modest fat loss that didn’t occur with eating the standard three square meals per day, but not for the reason you might think. Many men simply found it difficult to consume such a large meal during their eating window — which unintentionally created a calorie deficit. Eating this way also elevated blood pressure and cholesterol among some participants.

“They were almost force-feeding them. Eating 2,000 calories, or even 1,500 calories, in one sitting is kind of tough for people,” Varady says.

Varady is in the process of publishing a new study that looks at a time-restricted eating pattern involving obese men and women. For two months, participants ate between 3 p.m. and 7 p.m. and fasted the rest of the time. Adhering to a feeding window led to natural calorie restriction, Varady says. As a result, most participants lost around 10 pounds over the course of the study, and there were reductions in blood pressure, insulin, insulin resistance and oxidative stress.

“Time-restricted eating is amazing in that you just have to watch the clock. You just stop eating when you’re supposed to stop eating, and people just naturally calorie-restrict,” Varady says.

However, people may want to be extra cautious when it comes to following OMAD's more extreme 23-to-1 feeding schedule. Having only one hour to eat every 24 hours might make nutritional and caloric deficiencies more likely. (And, by the way, adults generally aren’t supposed to regularly eat less than 1,200 calories per day.)

“If they’re not counting calories, they’re probably only eating around 1,000 calories. If it’s that low, it would be hard to get all your nutrients in. I’d almost recommend taking a supplement just to be careful,” Varady says.

Fasting, as you may have heard, can be hellish. But Varady says most people will adjust within 10 days after starting — and that the same is probably true for OMAD.

“Some people find fasting difficult for a number of reasons. They report that they find it hard to concentrate, they might feel weak or irritable, they feel hungry, they get constipated and they miss out on social interactions,” wrote Amy Hutchison, an obesity researcher at the University of Adelaide in Australia, in an email to Discover.

Another caveat of OMAD is that it might be unrealistic to follow long-term, Hutchinson says. Not many of us can live the rest of our lives eating one meal a day. And that’s OK. Successful weight loss really just boils down to caloric restriction. OMAD and other forms of time-restricted eating are easier for some people to stick to. But part of its allure might also be that it’s different from what has been popular in the past.

“We were so obsessed with fasting carbs for so long, and I think people were getting sick of the macronutrient-counting and buying whole other sets of groceries for their pantry,” Varady says. Fasting “is a much simpler diet that just involves meal timing, and you don’t have to buy a bunch of fancy foods for it.”