How grass-fed and grain-fed cattle are raised — and the truth behind the meat labeling requirements. 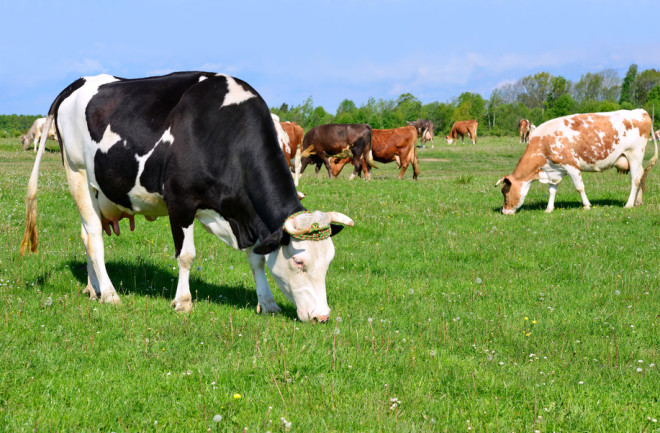 There’s a lot to consider when it comes to interpreting the impact of our food choices and deciding what to put in our bodies. Conscious consumers want to eat food they perceive to be better for people and the planet. Despite this, access to credible information about our food can seem short in supply — especially when it comes to grass-fed beef.

The idea of grass-fed beef might conjure idyllic images of cows grazing on open fields under big blue skies. Then, after living happy lives, they go on to become hamburgers and steaks. It seems like a win-win scenario. But there might be a bit of a disconnect between some of the feel-good marketing and the product that consumers actually are getting.

Most people buying packages of beef labeled “grass-fed” at a supermarket in America probably assume that the animals grazed on grass and other forage their entire lives and were never fed corn or other grains. But food labels can’t always be taken at face value.

“Consumers need to be aware that some beef being marketed as grass-fed is not always from animals raised to market weight on forages alone,” says David Hartman, a livestock educator with Penn State Extension.

There aren’t universal standards in the U.S. for grass-fed beef production, nor is there much federal oversight into what can be considered grass-fed beef and what’s not. So, those expensive steaks with a grass-fed claim might not be all that different than the grain-fed steaks next to them in the meat case — unless you know what to look for.

Whether grass-fed is healthier for you or better for the environment depends on who you ask. But something that’s indisputable to Carrie Balkcom, the founding executive director of the American Grassfed Association (AGA) in Denver, is that people deserve to get what they’re paying for.

“We need to have proof in labeling because it’s the right thing to do,” Balkcom said. “We’ve gotten so far away from what a label should be that we’re trying to right that curve — and it’s a big curve to right.”

What Do "Grass-Fed" Beef Labels Mean?

The Agricultural Marketing Service of the USDA used to have a standard definition for grass fed beef, but withdrew it in 2016, Balkcom said. Beef producers still must apply to the USDA’s Food Safety Inspection Service (FSIS) — the labeling arm of the agency — in order to stamp “grass fed” on their packaging. But Balkcom said the catch is that the labeling is largely a paperwork based process.

“They never see a farm — it’s all done by affidavit,” Balkcom says, of the FSIS. “They have 16 employees that oversee half a million labels a year … if the paperwork’s in pretty good shape, you get your grass-fed label claim. So that’s pretty much what happens.”

Grass-fed meat producers can voluntarily seek out certification from the AGA’s certification program. Hartman noted that the AGA’s requirements go beyond the USDA’s. Inspection procedures under the AGA include unscheduled visits of farms at different times of the year to check on animal welfare and environmental practices. Inspectors ensure the animals only feed on grass or forage, that they are never confined, and are never given added hormones or unprescribed antibiotics, to name a few.

A package of grass-fed top sirloin from Thousand Hills farm in Cannon Falls, Minnesota. It carries the American Grassfed Association label, which is green with four blades of grass. (Credit: Keith Homan/Shutterstock)

Data into the amount of “fake” grass-fed beef that might be sold to consumers is unavailable. But researchers Discover contacted, who study beef production systems, noted that some practices in the industry might not be what the consumer has in mind when they think of grass-fed beef.

“I think it is important for consumers to know how their cattle are raised,” said Jason Rowntree, a professor of animal science at Michigan State University. “When people think of grass-fed, they think of cattle grazing bucolic pastures … [but] grass-fed can be done in a quasi-confinement setting. Likewise, some folks do a grain-on-grass program that keeps the cattle out on pasture but feeds them some grain. Grass-fed beef is not organic, either.”

Grass-finishing is another term used to sell beef. Finishing refers to what the animal ate in the weeks and months before it was harvested. There isn’t an official definition or standard around the grass-finished method, but it generally means the cattle ate corn or other grains at some point during its growing period. The animals might be finished on grass for as little as a couple of weeks prior to slaughter, Balkcom said.

Some consumers opting for grass-fed beef also want to support local farms. But they might be unaware that there’s a lot of foreign-raised grass-fed beef on supermarket shelves. In 2015, the U.S. government repealed its “country of origin” labeling requirements. As long as the meat is processed or packaged in the U.S., it can be labeled as a product of the USA. All meat still passes through USDA food safety inspection and typically caries a USDA-inspected label, however.

How Grain-Fed and Grass-Fed Cattle Are Raised

All beef cows are weaned from their mother’s milk at around six to eight months of age before they are switched to a diet of grass and forage — which means plant material, for us city slickers.

After a period of four to six months of grazing on grass, conventionally-raised cattle are moved to a feedlot where they eat a grain-based diet for around 180 to 210 days. This promotes quick weight gain before slaughter. Speeding up the time it takes for cattle to reach market weight leads to a quicker turnaround of the animals. Generally, this equates to higher profit margins for the farmer — which often translates to lower consumer prices.

Grass-fed animals, however, are never sent to grain feedlots. The AGA still upholds the definition that the USDA originally established for grass-fed beef — that the animals spend their entire lives eating grass and forages after they are weaned, and that they always have access to pasture.

Grain-fed cattle are generally slaughtered at around 14 or 16 months of age, while it takes an additional year to bring grass-fed cows to market weight. This is because grass and forage is less energy-dense than corn and other grains. The additional costs to raise the animal — often on smaller-scale farms — is why grass-fed beef products tend to cost more. Balkcom also noted that farmers of grass-fed cattle do not receive any subsidy money from the government.

Grain-finishing, a practice that became more widespread in the 1950s, tends to produce beef with more marbling, tenderness and milder flavors — all characteristics that consumers have come to enjoy, said Stephen B. Smith, a professor of meat science at Texas A&M University.

“The U.S. is blessed to be the largest corn producer in the world. Countries that produce high-quality beef — such as Japan and Korea — realize the importance of corn-based rations for maximizing beef carcass quality, so they import a great of corn from the U.S,” Smith said.

"I like to say that it’s beefier. You shouldn’t be able to cut beef with a fork. It’s something to be enjoyed, to be masticated,” Balkcom said.

What cows eat can also affect the nutritional content of their meat. Grass-fed beef is leaner, containing less fat and fewer calories. There are also higher levels of omega-3 fatty acids in grass-fed beef when compared to grain-fed — but the amount is still pretty minimal when compared to fatty fish like salmon. Overall, the nutritional differences aren’t stark enough to make grass-fed the standout, healthier red meat option — which is a big misconception among consumers, Smith said.

“An 8-ounce grass-fed steak (USDA grade Select) would have about 6 grams less fat than a grain-fed steak (USDA grade Choice), or 54 fewer calories. Grass-fed beef contains more omega-3 fatty acids than conventionally-raised beef, but the amount of omega-3 is so small that it would have no impact on human health,” Smith said. “Other nutrients, proteins, minerals and vitamins are not changed noticeably by grass feeding.”

Eating grass-fed beef might not amount to many health benefits. But Rowntree noted that there are environmental arguments in favor of producing more grass-fed beef. Much of the corn that eventually becomes cow food requires a lot of water, pesticides and fertilizers to grow. He said the intensive grain farming practices that have led to land degradation, soil erosion and desertification is “where the debate should be.”

Rowntree has studied the potential that grass-fed cattle production can have on helping to rebuild soil and promoting what's called carbon sequestration — or removal of carbon dioxide from the atmosphere.

“I actually advocate for more grazing animals on the land, because when [the land is] managed properly, even [if the cattle are] belching and farting their little hearts out, the positive benefits to improved water cycling and carbon sequestration in grasslands and marginal cropland will more than offset the global warming potential.”

There’s what’s good for the planet and what’s good for humans — but what about what's good for the animals that become our food? It’s an ethical question that’s perhaps outside of the scope of science. Biologically speaking, cows have unique multi-chambered stomachs aided by microbes and digestive enzymes to break down cellulose, a type of fiber from plant foods. Ruminant animals like cows, along with a few other creatures, are the only ones with that ability. For Balkcom, that means cows are born to graze on grass.

“[These] animals aren’t designed to eat cereal grains. It makes them acidic, so you have to give them antibiotics or antacids to keep them from developing abscesses in their livers and other things. They can’t digest it correctly. It’s a diet their body is not designed to eat,” Balkcom said. "[Grazing] is the way nature intended for these animals to be raised."