The same responses that sometimes kick in when you dig into an ice cream cone can also cause other types of headaches. 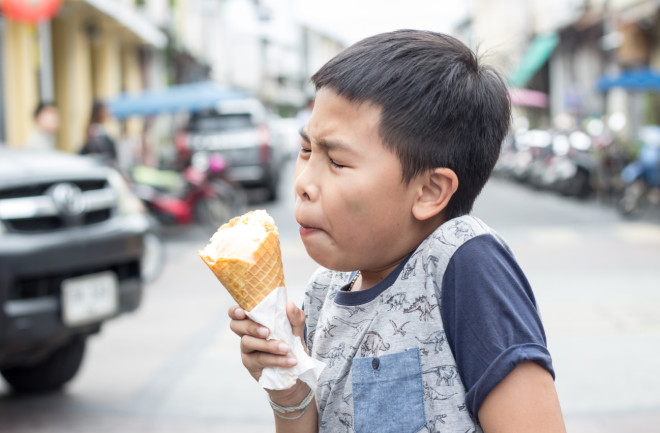 Nothing ruins a summer day quite like the jolt of pain that strikes while eagerly sipping a cold milkshake. The paralyzingly frosty sensation — experienced by about a third of the population — is a cold-stimulus headache, more commonly referred to as an ice cream headache or brain freeze.

“It occurs when a cold stimulus is applied to the top of the mouth or the back of the throat,” says Mark Green, president of the World Headache Society and member of the Professional National Headache Foundation’s Leadership Council. “Then the pain begins in the temples or frontal region [of the head].”

Green notes that despite its name, the chilling sensation can be caused by any cold stimulus, even ice water. He adds, however, that “the cold has to be applied to a large area in that location, so ice water is more likely to trigger this than an ice cube.” The speed of ingestion also plays a role. For example, a 2002 study found that gobbling down ice cream in less than 5 seconds doubled the likelihood of brain freeze compared to those who ate the same amount in 30 seconds.

And this phenomenon isn’t limited to eating and drinking. “It has actually been reported in skiers and ice skaters,” Green says, suggesting that cold air can trigger brain freeze as well. So how exactly does a joyfully icy experience become so jarringly painful?

A Moment on the Lips

Brain freeze typically begins in the mouth, where blood vessels rapidly detect and respond to the extreme temperature change that heaping spoonfuls of ice cream can bring. The roof of the mouth, called the palate, is particularly sensitive to these thermal fluctuations thanks to its extensive vascular coverage.

But even beyond the mouth, blood vessels respond to cold sensations by constricting or narrowing to preserve the body’s core temperature from extreme changes. This restricts blood flow from non-essential body parts, such as the skin and extremities, to protect more crucial internal organs. The vessels typically reopen periodically to allow short bursts of blood back into the tissues to warm them up.

This vessel plasticity is the reason your face becomes flushed in the snow (and why some people encounter unwanted shrinkage in a cold pool). Like these protective mechanisms employed throughout the body, blood vessels in the palate also rapidly constrict and dilate while ingesting a cold treat.

Pain in the Membrane

Despite the term “brain freeze,” the brain itself doesn’t actually become cold. Instead, the cold-triggered vessel changes in the mouth affect blood flow to the brain. A recent study found that quickly gulping down ice-cold, but not lukewarm, water increased blood flow through one of the brain’s major arteries. Interestingly, though not all study participants experienced brain freeze headaches, these blood flow changes were more substantial in those who did.

So what makes these vascular brain changes so uniquely painful? Teshamae Monteith, an associate professor of clinical neurology and chief of the Headache Division at the University of Miami’s Miller School of Medicine, provides some insight

“The mechanism is not fully known,” she says, “but some studies suggest that sudden exposure to cold ingestion may result in rapid constriction of cerebral [brain] vessels, which activate the vessel wall pain receptors.”

These ice cream-induced vessel changes likely trigger pain through the trigeminal nerve, which surrounds the major blood vessels in the brain. This nerve is also responsible for relaying sensory information, including pain, from the face, mouth and nasal cavities. Because few people experience brain freeze when enjoying a cold treat, some scientists believe the trigeminal nerve may be more sensitive in these individuals.

In addition to brain freeze, similar interactions between the brain’s major blood vessels and trigeminal nerve may also cause other, more severe, types of headaches. “People with brain freeze are more likely to have migraines,” Monteith says. Additionally, it appears that the pain associated with brain freeze is even more intense in those who regularly experience migraines.

Wondering how to make these arctic aches go away? One option is to simply wait out the pain, which typically lasts 30 seconds or less and is ultimately harmless. But seconds can feel like hours when that icy sensation strikes, so Green suggests that the best way to combat brain freeze is to prevent it.

Like other types of headaches, a study published in Cephalalgia Reports last year found that taking an anti-inflammatory drug before cold exposure could successfully prevent brain freeze from striking. Since it’s unlikely that everyone will want to pop a pill before diving into an ice cream cone, however, there are more practical solutions.

Because rapid blood vessel changes in the palate trigger these pains, Green recommends that “if you have this problem [while] eating ice cream and drinking cold fluids, you should slow down” and “try to keep it away from the back of the throat.” He also notes that if you do get an attack, drinking a warm drink might shorten its duration. Pressing your warm thumb against the roof of your mouth is worth a shot, too.

As hard as it may be to resist inhaling that 32-ounce Slurpee in record time, your trigeminovascular system would probably appreciate it.