Viruses: What They are, How They Spread, and How We Fight Them

Some of the most deadly diseases of the modern era come from viruses — and they’re not even alive. 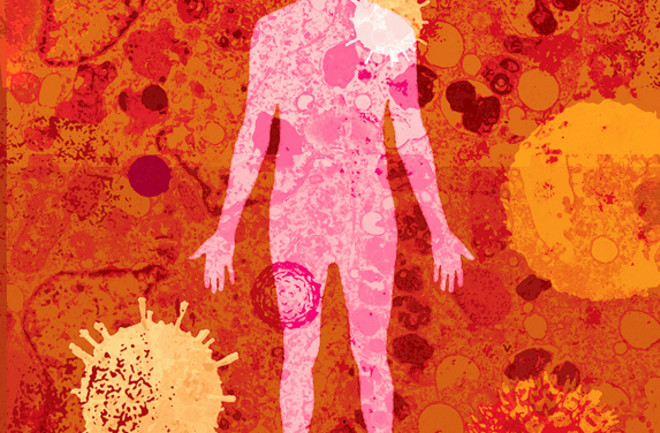 Viruses are not alive, at least in the classical sense. While they’re made of proteins and genes like living things, they need to interact with living host cells to reproduce. These agents of cellular mayhem have been the cause of history-altering outbreaks and pandemics, from smallpox and polio to HIV and Ebola, but were only discovered at the turn of the 20th century. Since then, we’ve found them in nearly every ecosystem worldwide. Viruses are, and always will be, the world’s experts at going viral.

Viruses are ultra-tiny packages of genetic material. A single particle, or virion, of influenza is up to 100 times smaller than common bacteria; you could fit some 15,000 end-to-end across the head of a pin. The outer layer is a protective shell called a capsid; some viruses also have a viral envelope, a second layer that helps virions attach to host cells. The envelope can act as a sneaky cloaking device, helping virions avoid detection by a host’s immune system. Most viruses have just a few genes, which contain the instructions for making new viruses in either DNA or its single-stranded relative, RNA. But they don’t have any cellular machinery to read and execute that genetic code. That’s where a living cell comes in. When a virus bumps into a potential host, proteins on its outer layer interact with proteins on the living cell’s outer membrane. If it’s the right type of cell — for example, most influenza viruses can only infect certain cells in your nose, throat and lungs — it’s able to latch on and inject the cell with its genetic material. The host cell doesn’t realize the new genes are foreign, so it runs the instructions written in the genetic code alongside its own. This tells the cell to make copies of the viral genome and package them up into new viruses that burst out of the cell to find host cells of their own. Many viruses replicate through this process. However, when an RNA-containing retrovirus infects a host cell, the RNA is converted to DNA and then inserted into the cell’s genome. This extra step in the replication process creates more room for a copying error, which makes the retrovirus more prone to mutation and rapid evolution. Researchers have yet to develop a vaccine for the retrovirus HIV, for example, in large part because its multiple strains keep evolving. ﻿

Parts of a Virus

Bacteriophages, bacteria-killing viruses that look like lunar landers, have already played an important role in scientific research. In 1976, phage MS2 was the first organism to have its genome — a mere four genes — sequenced. In the future, they may help us fight antibiotic-resistant bacteria.

Viral Events of the Modern Era

How the Body Protects Itself

When the human body detects a viral intruder, the immune system’s white blood cells go to war. The first line of defense includes macrophages, large cells that gobble up as many viruses as they can. If that battle is lost and the viruses take hold, the second wave is led by T and B lymphocytes. On the signal from the T cells, these B cells make antibodies, special proteins that latch onto the viruses, marking them for destruction by other immune cells and sometimes preventing them from replicating. T and B cells never forget a virus they’ve encountered, so they jump into action if the virus reappears. T and B cells aren't as much help against colds or the flu, however. The “common cold” can be caused by a number of viruses, including adenovirus or rhinovirus: If you’ve had a cold more than once, it means you’ve been attacked by a different virus or viral strain each time. The influenza virus has many different strains, including several that quickly mutate beyond recognition by your T and B cells. Epidemiologists monitor the circulation and evolution of different strains worldwide and determine those most likely to pose a threat during the next flu season. That's why flu shots change every year.