The Complex Causes of Liver Disease

Exposure to environmental chemicals may interact with other factors to cause liver disease. 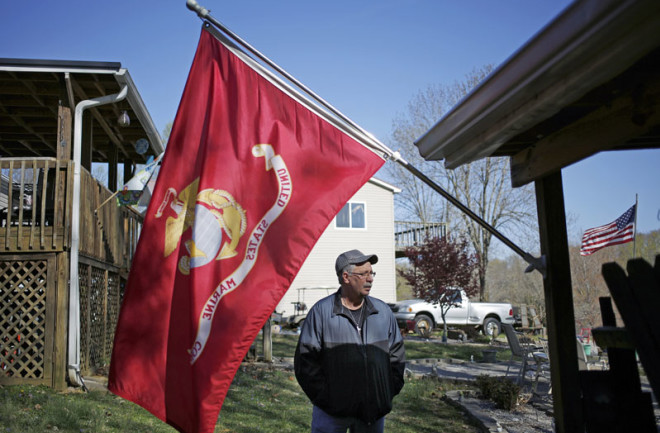 In 2010, a diagnosis of liver disease came out of the blue for retired Marine veteran Paul Coater of Falls of Rough, Kentucky. Contaminated water at Camp Lejeune may have been a factor. (Credit: Luke Sharrett)

Paul Coater has never been much of a drinker. The retired Marine figures that in three decades, his drinks maxed out at two beers a year, with a few special occasion celebrations thrown in. “I might have really wahoo-ed it and drank two glasses of wine on New Year’s,” he says.

So he was surprised when he was diagnosed in 2010 with stage-four cirrhosis, the scarring of liver tissue often associated with excessive alcohol consumption. Coater was referred to Matthew Cave, a liver health specialist at the University of Louisville. Cave took Coater on as a patient, but at first it wasn’t necessarily clear to him what could have caused the disease.

Shortly after, reports started coming out about contaminated water at Camp Lejeune, a Marine Corps base in North Carolina where Coater served in the late 1970s. Now, Cave thinks that exposure probably played a role.

Doctors had largely thought that increase was tied to soaring obesity rates — and it is related. But research indicates that certain chemical pollutants may play a role as well. Cave says that in some cases, chemicals by themselves can cause liver disease, but in other cases they compound the risk already posed by obesity.

Liver disease can be hard to detect. There’s no easy way to test for it, and it’s typically asymptomatic until it’s advanced — and at that point, there’s no cure. Juliane Beier, a toxicologist also at the University of Louisville, describes liver disease as a spectrum of diseases. Because it’s a resilient organ, the first several stages are all reversible. “Let’s say you’re exposed to anything known to cause liver disease, for example, a few drinks in one night. The next day, you will have fatty liver. But if you stop drinking, it will revert,” she says. Eventually, though, the liver loses its ability to revert. “That’s why the study of liver disease is so important right now, because you can’t do anything against it.”

The liver seems to be more vulnerable when faced with more than one of those risk factors for liver disease. This “two-hit” theory is not new for the liver — it’s been in the scientific literature for over two decades — but previous research has mainly focused on factors like obesity and the environment. There didn’t seem to be much thought about the possibility that chemicals may also play a role.

And to be sure, diet and exercise, as well as genetic susceptibility, are by far the biggest factors in NAFLD.

“I don’t want someone to think that they’re feeding their kids chicken nuggets and letting their kids play the Xbox all day — and somehow they have fatty liver because they got exposed to a chemical. By and large, lifestyle is the dictator,” says Angela Slitt, a toxicologist at the University of Rhode Island. “The question becomes, is chemical exposure a risk factor?”

Research so far suggests that it is. Exposure to specific chemicals seems to act as a second hit that, combined with obesity, could start the liver down a path where damage may not be reversible. Cave has demonstrated the effect with industrial chemicals including vinyl chloride and PCBs, which were banned in the 1970s but don’t break down easily, and continue to contaminate air, water and soil around the world. Slitt focuses on fluorinated chemicals, which have been used in everything from carpet treatments to microwave popcorn. Researchers elsewhere are finding that dioxins and other chemicals may also play a role.

“We’ve confirmed it a couple times now, that the exposures by themselves really didn’t seem like they did a lot of bad things to the liver,” says Cave. “It was only when the mice were fed a poor diet, a hyper-caloric diet, and then got the chemicals, that the liver disease got worse.”

Likewise, he says, a poor diet alone did not cause a more advanced form of liver disease called steatohepatitis in mice, but did so in conjunction with chemicals.

Beier and colleagues recently found that vinyl chloride disrupts metabolism and can increase the liver disease risk of a high-fat diet, even at levels below what the Occupational Safety and Health Administration has deemed safe for workers.

Non-alcoholic fatty liver disease — often tied to obesity, poor diet and genetic susceptibility — also may be the result of exposure to industrial chemicals, according to animal studies. Researchers have found that a combination of just two factors can overload the liver to a point of no return. Scientists now are attempting to measure the effect in people. (Credit: Ellepigrafica/Shutterstock)

“[Cave] has a cohort of highly exposed people from an old industrial population, and they’re finding very high levels of liver problems, and they’re able to also associate those problems, using his animal models, with dietary factors,” says Thaddeus Schug, a health science administrator with the National Institute of Environmental Health Sciences (NIEHS) who oversees Cave’s work. “He seems to be showing that there is a relationship.”

For the researchers involved, their work is urgent because it affects everyone. “Exposure to VOCs [volatile organic compounds] in general is unavoidable. One hundred percent of the population is exposed to them,” says Beier. What she and her team are studying is the role that lower — everyday — levels of exposure may play in developing liver disease.

Slitt recently launched a five-year study exploring whether different kinds of chemicals can act as unique “hits” against the liver. And Cave hopes that with a new National Institutes of Health (NIH) program — he is one of eight scientists chosen to start it — he and colleagues can work to fill in some of the research gaps, such as which other chemicals may have similar effects.

Schug says metabolism and obesity have been a research priority across NIH, which is NIEHS’ parent agency. NIEHS has also been supportive of research on the exposome, a relatively new field studying the breadth of environmental exposures in a person’s lifetime, and how those affect health.

“[Cave’s] work falls right in line both with the exposome and metabolism, and trying to figure out if chemical exposures are leading to the obesity epidemic, leading to the rise in liver problems,” says Schug.

Water wells at Camp Lejeune, a Marine Corps base in North Carolina, were contaminated with vinyl chloride and other industrial chemicals from 1953 to 1987. Veterans who were based there during that time now receive expanded health care benefits. (Credit: Gerry Broome/Associated Press)

No Clear Answers Yet

Coater, the retired Marine, recalls being perplexed when he was first diagnosed with cirrhosis. “I know it wasn’t alcohol that gave me cirrhosis, and I’m pretty sure it wasn’t Southern fried food,” he says, while walking his dog one February afternoon.

The Department of Veterans Affairs has acknowledged that several water wells on Camp Lejeune were contaminated between 1953 and 1987 with vinyl chloride and other chemicals known to cause health problems, including several types of cancer. Veterans who were based there or at a nearby air base are eligible for expanded health care benefits. Coater says he was based at Lejeune from July 1976 until January 1978.

Cave cannot say for certain that the vinyl chloride exposure is behind Coater’s cirrhosis, but it seems a possible culprit. Coater isn’t necessarily a picture of health — he has a weakness for fried foods, though not more than the average person, he says. He once ate them without guilt because he felt he was exercising enough to compensate for it. Now he walks his dog four times a day and swims and bikes, in an effort to keep his weight in check and diabetes under control.

But the chemicals at Camp Lejeune may have been another hit on his liver. To Cave, it illustrates the reality of how we live today. “Fatty liver is caused by different things that we’re all exposed to simultaneously,” he says.

Today, Coater focuses on doing the best he can to stay on top of his health. He tries not to get hung up on what may have caused the disease. “People today,” he says, “we’re just looking for answers all the time that aren’t necessarily in black and white.