The Search for the World's Oldest Alcohol

If recent reports are true, it would mean the earliest known beer production was 13,000 years ago. 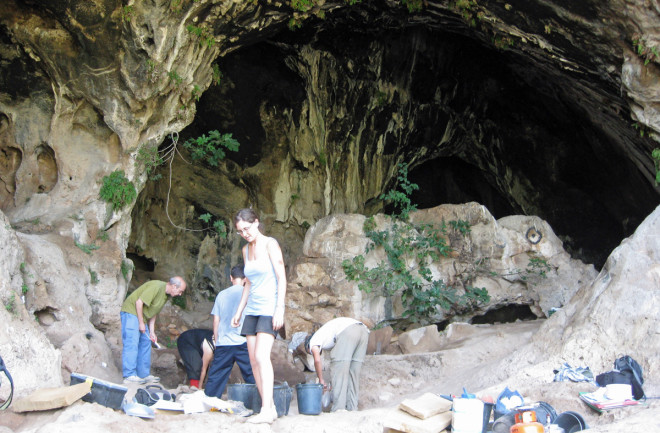 Before the brewpub there was the brew cave. In Israel's Raqefet Cave archaeologists recently reported traces of what could be the earliest known beer production 13,000 years ago.

The evidence comes from three stone mortars, analyzed in a 2018 Journal of Archaeological Science: Reports paper. After extracting residues from the rocks, the researchers identified plant molecules, including wheat or barley starches that appeared malted, mashed and fermented — the main ingredients and basic steps of beer brewing. The team also analyzed microscopic scratches and polishing on the stones. Two of the mortars had patterns indicative of plant storage and the other seems to have been used for pounding food with a wooden pestle.

If the interpretation is correct, this would push evidence for alcohol production or fermentation back several millennia. In 2012 researchers found "not fully conclusive" chemical traces of beer production in ~10,000-year-old limestone basins at the site of Göbekli Tepe, Turkey. Analysis of those vats is ongoing.

But convincing booze dates to roughly 8,000 years ago, as attested by chemical markers in pottery from both China and the Caucasus mountains in the Middle East, between the Black and Caspian Seas. The preserved molecules suggest the Chinese were fermenting a brew of rice, honey and fruit, while the Middle Easterners were making grape wine. Though the list of possible ingredients is long, scholars classify alcoholic beverages into beer — made from starches that must be broken into sugars before fermentation — and wine, which is made from sugars like fruit or honey that can be directly fermented.

During fermentation, certain microbes, particularly yeasts of the Saccharomyces type, feed on the sugar, producing CO2 and ethanol, or drinkable alcohol. Hard liquor like whiskey or vodka requires the additional step of distillation, using evaporation to purify the ethanol into a higher concentration. The origins of this process are unclear, but ancient Greeks and Arabs distilled alcohol originally for medicine and perfume. Drinking spirits seems to have become popular in 16th century Europe.

Raqefet Cave seems like an odd spot for a brewery 13,000 years ago. On a steep hillside about 10 miles from the Mediterranean, the cave at this time was used as a cemetery, containing the remains of at least 29 men, women and children. The researchers suggest the beer remnants found there may have come from funerary rituals to venerate the dead.

Furthermore, these ancient brewers must have relied on wild cereals, because wheat and barley were not domesticated in the Near East until several thousand years later. But some scholars don’t find this surprising. In fact, archaeologists have long entertained the possibility that cereals were made into beer long before they were farmed for food. A scholarly debate in 1953 asked "Did Man Once Live by Beer Alone?" and suggested that selectively picking plants for beer led to the origins of agriculture in the Near East "cradle of civilization."

At that time the debate was speculative, because tangible traces of alcohol use could not be seen in the archaeological record. Yes, modern booze has a long shelf life, but bulk alcohol has not survived since the dawn of civilization. Our ability to detect ancient alcohol changed in recent decades, as scientists developed tools to recover microscopic plant remains and biomolecules from artifacts and fossils.

In recent years we've found traces of alcohol or its raw ingredients from numerous archaeological cultures, including wine in ancient Armenia ~6000 years ago, Nordic grog made from honey, fruit and cereals from ~1500 BC and corn beer from the Lake Titicaca region in the South American Andes from ~800 BC.

Trays like this were used by the Inca to make chicha, a type of fermented corn beer. (Credit: Wikimedia Commons)

The diversity of ages and regions make clear that alcohol was independently discovered in many societies across the world, using native plants and technology. In different cultures, alcohol was imbibed as a source of nutrition, during rituals and for merrymaking, just as it is today.

By combining results from molecular analyses with ancient texts, artistic depictions and traditional recipes for alcohol, researchers have reconstructed many ancient brews. In the Inca Empire of the Andes, the main alcoholic drink was corn beer of usually less than 5 percent ABV, called chicha in Spanish or aqa in native Quechua. The Aztecs of Mesoamerica made pulque from agave juice, also at around 5 percent ABV.

In ancient Mesopotamia and Egypt, barley and emmer wheat beer of 3 to 6 percent was consumed daily at meals, and was likely a major source of nutritional calories, while wine of 8 to 14 percent was consumed by elites or on special occasions. Sub-Saharan Africa has traditional alcoholic beverages, still consumed today, made from cereals, bananas, palm sap and honey, though less is known about their origins.

And the ancient ABV award probably goes to East and South Asia where, since before written history, rice-based drinks like Japanese sake likely hit 10 to 20 percent.