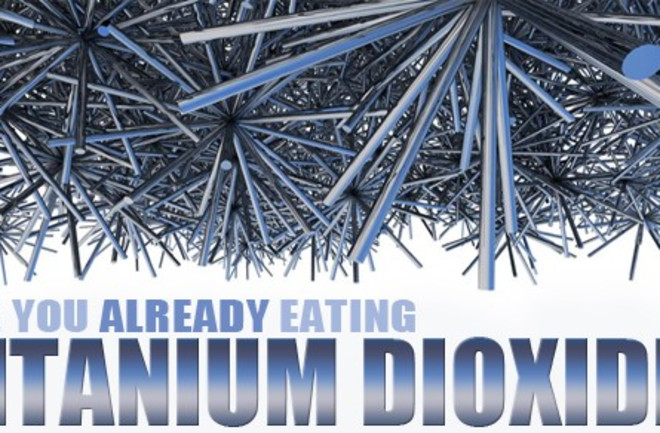 Titanium dioxide isn’t something we usually request as a donut topping from the local bakery. However, most of the sweets we eat on a daily basis contain this chemical.

What is titanium dioxide?

Titanium dioxide has a solid tetragonal crystalline structure and is derived from three main natural minerals: rulite, anatase, and brookite.

Where does titanium dioxide come from?

U.S. Companies, such as DuPont, Cristal Global, Louisiana Pigment Co. L.P., and Tronox Ltd. process the mineral into a white powder, which has a refractive index of 2.5837, making it ideal for use as a filler or pigment that adds opacity to things like sunblock, shampoo, chewing gum, chocolate, and powdered donuts. Production of pure titanium dioxide is achieved through a method called the chloride process, wherein the raw minerals are first reduced with carbon and then oxidized with chlorine. Liquid titanium chloride (TiCl4) is then distilled and converted back into titanium dioxide by heating it to high temperatures in a pure oxygen flame.

Titanium dioxide nanoparticles (TiO2) are widely used as a food additive and are consumed by millions of consumers on a daily basis, as manufactures incorporate it into their food products. TiO2 nanoparticles are used as an additive mainly to prevent UV light from penetrating the food, effectively increasing the shelf life. It is also used as a color enhancer to make foods appear white by enhancing the opacity.

How much TiO2 is in your food?

Many popular consumer products such as candies, gum, and baked goods contain 0.01 to 1 mg Ti per serving. The products with the highest titanium contents are sweets or candies [1]. For example, powdered donuts can contain up to 100 mg Ti per serving.

The amount of titanium found in certain popular consumer products. [1]

What are the health effects of ingesting titanium dioxide?

Titanium dioxide is marketed by DuPont as an inert chemical, meaning it shouldn’t react with other chemicals. Given the fact that powdered donuts include 100 mg per serving of titanium dioxide and the lethal dosage, measured as the LD50 or the amount needed for 50% of the population to perish from consuming the chemical, was measured in rats to be 5,000 mg/kg, A 200 lb human (90.7kg) would need to eat 4,535 powdered donuts and have a 50% chance of survival. (5000)X90.7= 453500 mg. Although it is impossible for a human to consume this many donuts at once, Dunkin Donuts recently stopped using titanium dioxide in their powdered sugar donuts after being pressured by the public to do so.

There have been numerous scientific studies done on how titanium dioxide affects the health. Many of these studies are performed using animal models, such as mice. Both positive and negative health effects have been found. One possibly positive health effect of ingesting titanium dioxide is a substantial increase in the levels of dopamine, the happiness hormone [2]. Negative health effects due to the ingestion of TiO2 nanoparticles include damage to the liver, kidneys, testes, brain and heart of mice and rats, as described below [3,4,5]:

Given this information, it remains the consumers’ responsibility, as always, to make an informed decision on the foods they eat and follow rules of moderation in everyday life.