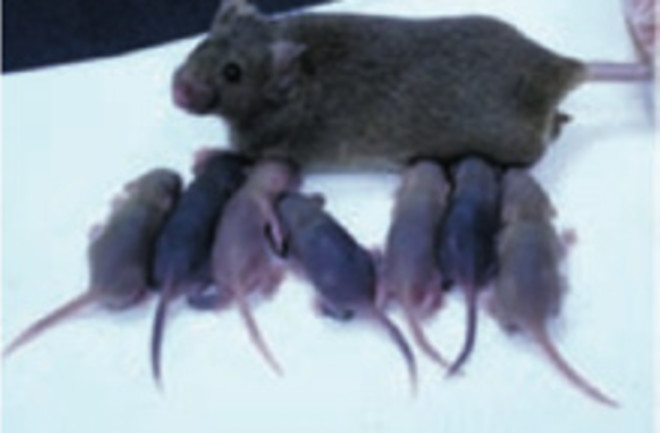 A group of researchers has found stem cells in the ovaries of mice that they say can be prodded to become new eggs, which can then be fertilized to produce healthy offspring. The provocative findings challenge one of the most fundamental assumptions in biology: that female mammals, including women, are born with all the eggs they will ever have…. While much more research is needed to confirm and explore the findings, the work raises the tantalizing possibility that it could someday lead to new ways to fight a woman’s biological clock, perhaps by stockpiling her egg-producing cells or by stimulating them to make eggs again [Washington Post].

In the study, published in the journal Nature Cell Biology, researchers wrote that the stem cells were cultured for more than six months and then transplanted into the ovaries of infertile female mice, … adding that eighty percent of these mice went on to produce offspring after natural mating [Reuters].

Other experts say that the findings are fascinating, but stress that the results need to be independently confirmed. They also note that there’s no guarantee that the ovarian stem cells exist in humans as well, or that they can perform the same regenerative function. Says fertility expert David Keefe: “The aging process of the human egg differs fundamentally from that of the mouse egg…. Except at Disney World, humans are not large mice” [Washington Post].

Stem cell expert Robin Lovell-Badge comments that if the research holds up, “it could provide a means to restore fertility to women who have few eggs or who have had to undergo cancer treatments, by isolating these cells, expanding their number in culture and keeping them frozen until needed for IVF” [Times Online]. While some women already freeze their eggs for future use, that process is still inefficient and unreliable.