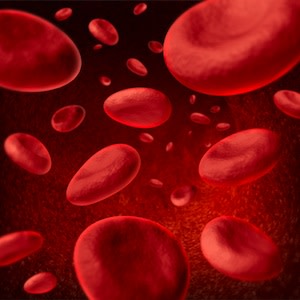 As technology advances, electronic implants may or may not

make their way into our bodies. But sometimes your own cells can prove sensors enough. Red blood cells, say scientists presenting work at the American Chemical Society meeting this week

, could eventually be transformed to send doctors messages about your blood chemistry, without ever needing to leave the body. Light, specifically near-infrared light, plays a starring role in this message-sending system. Near-infrared can seep through skin and strike the blood below. Scientists hope to eventually put special dye molecules into patients' bloodstreams that will, if the blood is at a particular pH, for instance, send out a fluorescent glow when light hits them. A monitor that can detect that glow could let doctors keep tabs on blood chemistry without requiring blood samples. There’s just one problem: The immune system registers dye molecules as foreign invaders and filters them out of the bloodstream. So this team of researchers at the University of Missouri-Columbia came up with an ingenious plan

to hide the molecules within red blood cells. They snuck a pH-sensitive fluorescent dye into the blood cells by soaking them in a lysis solution

, which made their membranes swell and grow porous. When the cells shrank back down, they acted as pH sensors. Since pH is just a measure of the concentration of hydrogen ions in a solution, and since ions rapidly flow into red blood cells, the dye's fluorescent signal reflected the acidity of the surrounding solution. The researchers have yet to test their biological pH sensor in animals, but they think that an injection of cellular sensors made from a patient’s own blood could remain in the body for over two months. Carefully selected dyes might let researchers make sensors for any substance that enters a red blood cell. Glucose, for instance, also travels quickly across a red blood cell's membrane---diabetics may one day be able to ditch daily prick tests in favor of a glucose-sensitive blood cell injection once every few months. [via Nature News Blog