Is a Patient's Stomach Pain Hours After a Colonoscopy a Sign of Something Serious?

A healthy 59-year-old hops on a plane after a colonoscopy and falls ill. Did she pick up a nasty bug, or is it something else? 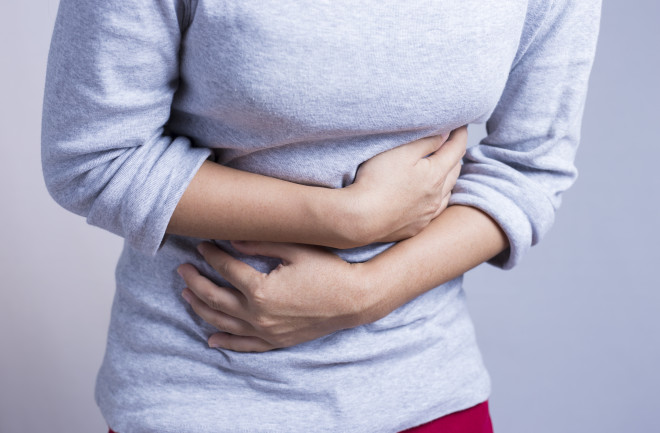 The middle-aged woman on the gurney trembled, stopped, and then shook again. It seemed an internal alarm wouldn’t shut off.

“I’m pretty fit,” Kelly half-apologized through chattering teeth. “Even followed guidelines and had my pre-birthday colonoscopy today. But it seems I can’t stop shaking.”

The nurse’s triage note read, “Shakes, chills, nausea, and palpitations while on a plane today.” Beautifully nonspecific, I thought.

Kelly’s heart rate clocked in at 120 beats per minute, which is abnormally fast, but her blood pressure and temperature were OK. As for her medical history, she took only a daily statin for cholesterol. Indeed, she was in good shape.

“What did you eat on the plane?” I asked.

Rule No. 1 to my medical students is: “Never, ever ask what they ate.” Humans have always just eaten something, which makes the last meal too inviting a suspect for new symptoms. One long-ago mishap was to believe a patient when she assured me: “This heartburn is from that pulled pork sandwich, doc.” It was her heart all right — as in attack, not burn.

But planes and ships can incubate fast-moving noroviruses and bacterial toxins that unleash the miseries of food poisoning.

“Just some crackers,” she replied. “The GI doctor told me to eat lightly after the colonoscopy.”

I pressed on her abdomen. “How does this feel?” I asked.

The dreaded (but rare) complication of colonoscopy is perforation. The peritoneum envelops the intestines in a double layer; think of the intestines wrapped in a thin, lubricated cellophane bag that allows them to glide smoothly against each other. But poke a hole in the colon and the escaping contents — bacteria, digestive juices or even blood — spill into the space between those layers, causing the near-instant pain of peritonitis.

“When you push down on my belly, it’s not too bad,” she responded. “The cramping hit halfway through the flight. At the hotel I got a headache, my fingers began tingling and my heart was racing to the point I thought I’d pass out. I was so thirsty. It didn’t get better, so I called an ambulance.”

“How long before the flight was the colonoscopy?”

“Did they do any biopsies?” Biopsies, predictably, increase the chance of a perforation.

A perfectly healthy person gets on a plane three hours after a colonoscopy. Halfway into the flight she feels shaking chills and nausea, but no vomiting, diarrhea or fever. Was it a perforation from the colonoscopy? A fast-moving plane bug? Something else entirely?

Is This an Overreaction?

Kelly’s benign abdominal exam didn’t suggest anything as dire as perforation. A quick X-ray showed no air under her diaphragm, effectively ruling that out. But shaking chills — rigors — suggested bacteria in the bloodstream, even without fever. A rigor is a rigor, I told myself. Entering orders for blood cultures, urinalysis and a panoply of other tests, I glanced at the heart monitor, which reminded me Kelly’s heart rate hadn’t come down. For good measure, orders for an intravenous dose of a broad-spectrum antibiotic and two liters of saline went in, too. Plane and colonoscopy notwithstanding, pneumonia or a kidney infection can start whenever it wants.

An hour later, Alison, the night shift doctor, took my sign-out. By then, Kelly’s white cell count and lactic acid (both markers for infection) were normal. The urinalysis and chest X-ray were pristine as well.

“Healthy woman,” I told my colleague, then recapped the story.

“See which way her symptoms go and maybe admit for sepsis or bacteremia if no improvement?” she asked.

“Sounds reasonable,” I said hesitantly. “So far, no infectious source. Heck, so far, no fever. I might be overcalling this.”

“No worries. I’ll keep an eye on her,” Alison reassured me.

Things got interesting right after I left. As Alison recounted the next day, Kelly’s temperature shot up to 103. Then she started complaining of “gaslike” lower abdominal pain. On repeat exam, there was some tenderness below the bellybutton on both sides. In light of the new fever spike, Alison decided to admit Kelly to the internal medicine service to continue antibiotics until blood cultures had incubated for 48 hours. She also ordered a CAT scan to investigate the worsening abdominal pain.

“Boy, was I surprised when it came back positive,” Alison said.

A flutter of fear zinged through me. “For what? Perforation?”

“What?” I spluttered. “That makes zero sense. Shaking chills, possible bacteremia, before she feels belly pain?”

This is not how appendicitis typically operates. Generations of medical students memorize how it pulls off its classic trick: The pain starts around the bellybutton. Then, hours later, it seems to migrate to the right lower abdomen.

In reality, there is no migration. The initial pain stems from the appendix trying to blow itself up.

Dangling off the cecum, where the colon begins, the appendix is a hollow tube that secretes a fair amount of mucus. Clog up that tube, and it begins to swell. That dilatation then triggers a primitive gut pain signal that’s perceived around the bellybutton. As the swelling increases, blood supply gets cut off, resident bacteria breach the intestinal lining, and inflammation sets in. Local pain fibers light up in the abdominal wall, making it appear the pain has migrated. The appendix eventually bursts, releasing pus and bacteria into the abdominal cavity and, thence, the bloodstream. If it gets that far, you’re in big trouble. But it takes a while.

Pumped Up With CO2

Later that day, I stopped to quiz my friend Forrest Manheimer, a world-class gastroenterologist.

“I tell people not to fly the same day,” he said. “We pump the colon full of carbon dioxide to better visualize its folds with the scope. So you’re already inflated, then you get more inflated when you go up. Now segments of your colon blow up two to three times their normal diameter. If there’s a weak spot from a biopsy, you have a problem.

“We’re all used to having our ears pop,” he said. “This is one pop you really don’t want.”

“But she didn’t perforate. Do you think the inflation set off the appendix?” I asked him.

He smiled. “Makes you wonder.”

At cruising altitude — 35,000 feet — commercial airliners pressurize to the equivalent of 6,000 to 8,000 feet above sea level. If you’ve ever wondered why bags of chips puff out on flights, Boyle’s law (which says that the volume of a gas is inversely proportional to pressure) predicts that the air around those Cheetos will expand by about a third.

Here’s what I think happened to Kelly: Distended with carbon dioxide, her colon sequestered pockets of gas around the cecum. The carbon dioxide-filled cecum then went up to the equivalent of 8,000 feet above sea level and dilated even more, ballooning the appendix along with it. The sudden stretching opened tears in the appendix’s mucosal walls wider and deeper than with “natural” swelling, pumping bacteria right into the bloodstream. Bacterial toxins ignited the rigors, nausea and palpitations Kelly felt in-flight. Meanwhile, the appendix was getting started on its journey to peritonitis and perforation.

Our surgeons removed Kelly’s appendix. Happily, it had not perforated. The next day, the blood cultures all turned positive quickly, proving that a large bolus of colon bacteria must have burst into her bloodstream.

Boyle’s law blew up my sea-level certitudes. Bacteria in the bloodstream in early appendicitis is so unusual we rarely bother to send blood cultures. It normally is a late complication. Blame evolution for bequeathing us an appendage complete with a self-destruct mechanism — but maybe it’s on us for failing to anticipate gassed-up, jet-setting colons.