Keep it up, but give yourself the time you need to cross the finish line. 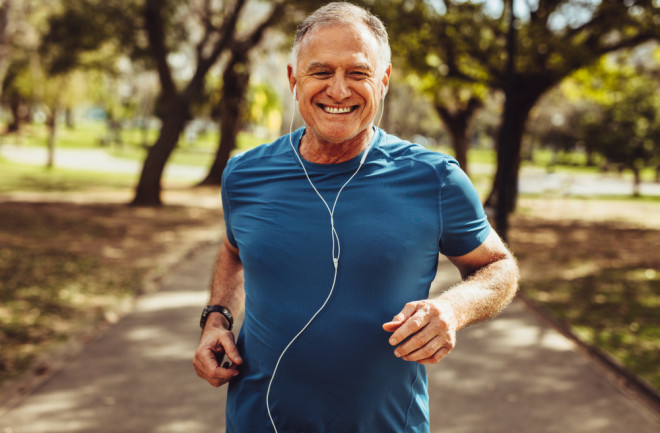 Staying active into your later years is crucial for your health. The recommended 150 minutes of moderate-intensity activity for healthy adults over 65 can keep muscles strong and help people go about life doing all the activities they enjoy. But if you’re meeting — and exceeding — suggested workout goals, do you need to scale back?

Save for when you get an overuse or stress injury, the short answer is: No. “The point is to stay doing what you've always been doing,” says Loretta DiPietro, an exercise and nutrition scientist at George Washington University. Naturally, people will find that their pace slows down or that they’ll need more rest days between bouts of exercise. Time might even show when it’s appropriate to adopt new activities altogether. But there are options (and competitive leagues) to help make transitions easier.

The thought that the same activities will gradually take more time to accomplish might be hard for a competitive person to accept. But that’s why DiPietro thinks it’s important to do the activities you enjoy, not just the ones that often make you a winner. And for those who do want to jostle for a prize, age-based competition brackets will safely satisfy that need. Competing against younger, faster, and more agile people might tempt someone to push themselves too hard to keep up. That kind of strain can lead to stress injuries, which older people recover from more slowly. By playing against your peers, you can compete against someone with similar limits. “Just as you may have slowed down a bit, you're playing against other people who have slowed down a bit,” DiPietro says.

If you haven’t been committed to a given workout your whole life, don’t worry. You can introduce new activities as you age, too. Master athletes — those who are participating in athletic events beyond the typical retirement age — are proof of this concept. Who qualifies as a “master” depends on the activity. For swimmers, the cutoff age is 25, for weightlifters, it’s 35, and for long-distance running, it’s 50. Those are only the minimum ages, however. Athletes in their 80s and 90s finish marathons, and DiPietro competes in the U.S. women’s over-60 field hockey team. She’s watched a men’s 75 and up field hockey match, too. “Very little running. If there was running, you couldn’t really distinguish it from the walking,” she says. “But as competitive.”

People tend to think that master athletes have been training in their given sport all their life, says Hiro Tanaka, an exercise physiologist at the University of Texas at Austin. But that’s not true. “It’s interesting because if you look at the elite master athletes,” he says — those who are, for example, setting world records on their event for their age division — “many of them are not really athletes when they're young. They just actually started exercising at an older age.” On the whole, the accomplishments of master athletes sets a great example. “It is actually a positive message that, you know, no matter how old you are, you are never late to start exercising and rediscover what you are capable of.”

How to Dial It Back

Granted, there are some activities that people might only be able to do for a limited time in life, DiPietro says. Gymnasts probably won’t be able to perform vaults into their 70s, for example. And in some cases, intense activities can wear out people’s bodies relatively fast. Former contact sport athletes in particular struggle with decline. Surveys of former NFL players, for example, showed the retired athletes under 60 were almost four times more likely to have arthritis than males of a similar age who didn’t play football professionally, and the painful joint condition was more likely if the athlete had suffered tendon or knee injuries during their career. Similar research with retired rugby players, meanwhile, found the former athletes six times more likely to need a joint replacement and twice as likely to report coping with bodily pain or mobility issues.

Tanaka actually suspects that part of the reason many master athletes weren’t top of their field in their youth is because those who were in that position put significant wear and tear on their bodies. Those who outran or outswam their peers in their younger years might not be able to perform those same motions as well as they age.

If an activity becomes too challenging, the next step is to transition to something that doesn’t strain the body the same way. Biking and rowing are both low-impact sports, meaning they put less demand on your joints. Swimming serves as the ultimate low-impact option — there’s no weight-bearing at all. “Swimming is really an underappreciated form of exercise suitable for older people,” Tanaka says. Elderly individuals are more prone to heat stress too, and being immersed in water makes that much less of a concern.

And if it isn’t already part of your routine, try and incorporate strength training, too. Since weight lifting only became a routine part of sports training in the 1980s, some older individuals aren’t in the habit of pumping iron. Even if you start with light weights, it’s possible to build up, DiPietro says, even if that means adding more pounds slowly or taking more rest days between sessions.

Aging can often mean experiencing more and more loss — of partners, of proximity to family, and during the pandemic, of most social interaction, DiPietro says. Keeping up workouts and the social groups that come with them can be an exception to that trend. If need be, take your cue from the 75 year-old field hockey players: Next year, there’s going to be a series for those who are 80 or older.

More From Discover
Health
Why Walking Might Be One of the Best Exercises For Health
Health
Why Do Some People Live So Long?
Health
Combat Cognitive Decline With These 5 Activities
Technology
Life After Death? Cryonicists Try To Defy Mortality By Freezing Bodies
The Sciences
Inside The Brains Of Aging Dogs
Health
New Study Finds Men May Outlive Women Instead
Recommendations From Our Store
My Science ShopDiscover STEM Kits
My Science ShopDiscover 2022 Calendar
My Science ShopStrange Science
My Science ShopElements Flashcards
Shop Now
Stay Curious
Join
Our List