A new analysis of nutritional labels finds that even cereals approved by industry for marketing to children have high amounts of sugar. 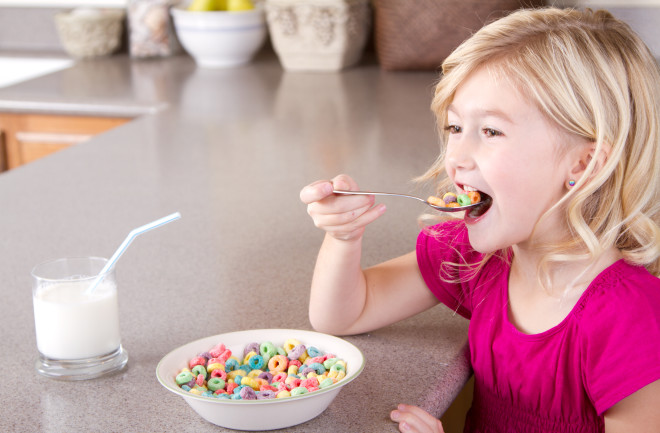 We’ve all seen (or been) the parent reluctantly tipping their child’s cereal choice into the shopping cart. In theory, the food industry assuages at least some of a parent’s guilt: They self-regulate how much sugar is allowed in cereals marketed to children.

But according to new research, even the most educated shoppers might have a hard time figuring out just how much sugar is in their kids' cereal. Though companies might set their own limits, they often don’t market the truly low-sugar cereal options to children with fun characters and entertaining boxes.

Published in the Journal of Nutrition Education and Behavior, the study points out how challenging it is to pick up a box, read the label and walk away knowing how much sugar it actually adds to a child’s breakfast.

The research team isn’t necessarily making any particular recommendations on how packaging labels should read, says study co-author Matt Ritter, a communications researcher at High Point University. Pointing out confusing labels and the lack of effort to sell kids on low-sugar foods is “just starting the conversation,” Ritter says.

In 2006, food companies formed an initiative to self-regulate their advertising. If a participating company's cereal had more than 13 grams of sugar per serving, then that product couldn’t be marketed to children. Several large brands sell products that meet that requirement, even though many nutritional guidelines might find that 13 grams of sugar in one sitting is a lot. The American Heart Association, for example, recommends that children eat no more than 25 grams of added sugar each day.

But a cereal delivering less than 13 grams of sugar per serving still isn’t necessarily the healthiest choice on the shelf. Additionally, only a portion of cereals below that sugar threshold are marketed to kids with cartoon characters and games on the box.

To figure out which cereals are marketed to which breakfasters, Ritter and his team hit the grocery store and pulled 159 kinds of cereal off the shelves. “We had eight carts full of cereal in four cars,” Ritter says. “It took us a good 45 minutes to get it offloaded.”

The researchers found that there’s no standard way of measuring sugar content in cereals. That makes evaluating their nutritional quality hard, Ritter says. The industry coalition bases sugar levels on serving size — a vague metric that varies from brand to brand. Some consumers think the term reflects how much they eat in one sitting. In reality, most people eat more than the dictated “serving size” at one time.

Food guidelines also often discuss sugar content in terms of grams. Some federal food aid programs discuss sugar content by ounce, like the Special Supplemental Nutrition Program for Women, Infants and Children. When converted into those units, some cereals that were under 13 grams of sugar per serving end up on the blacklist for that particular assistance program. To make healthy shopping easier, vague terms and confusing back-and-forth units need to go, Ritter says. “As parents, we need to have all the facts. A standardized metric would help us in that regard.”

Appealing To Shoppers (And Their Kids)

The team also found that high-sugar cereals — the ones just under the 13 gram benchmark — were still the ones with cartoons and box designs meant to attract kids. Low sugar options didn’t get the same treatment. Even generic-brand cereals made those marketing choices. “Manufacturers are not making any effort to promote low-sugar options at the point of sale,” Ritter says.

Ritter is also interested in figuring out how the same cereals appeal to adults, too. Besides the colorful characters and funky fonts, some brands also advertise that they’re GMO-free, “heart-healthy,” or that they use “real” ingredients — phrases meant to attract a grown person’s eye.

Additionally, nutritional labels are now required to show how much added sugar is in the food. Ritter wants to see how that required disclosure might shift marketing prompts on the boxes too. To do that, there’s another epic grocery store haul in Ritter’s future.