How Much Exercise Does a Body Need?

Researchers keep moving the goal post on how much exercise we're supposed to be getting. 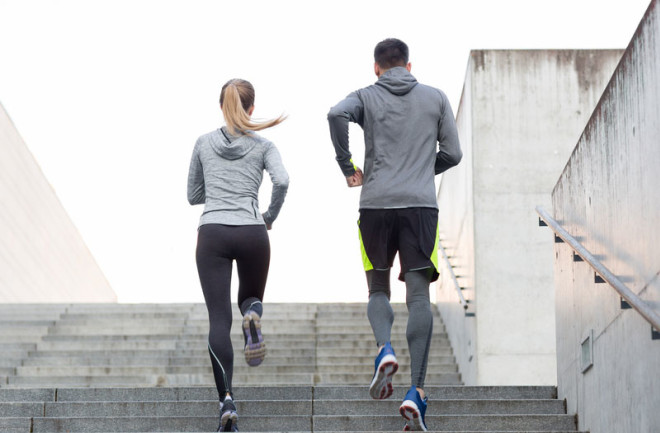 Researchers keep moving the goal posts on exercise. For a while, the trend was to show benefits of minimal exercise, perhaps as an olive branch to people too busy for a full workout. Lately, the trend is essentially to say effort matters; more exercise means better health. So which is right? Both are. But one overrides standard health guidelines.

Health institutions say people need about 150 minutes of moderate or 75 minutes of intense aerobic exercise each week. Moderate exercise might be brisk walking or active gardening, while intense exercise would include uphill cycling, sprints, tennis or squash.

In 2013, the peer-reviewed science journal PLOS ONE published a paper on a high-intensity workout that lasts four minutes. Twenty-six inactive, overweight, but otherwise healthy, middle-aged men were placed in two exercise programs. For 10 weeks three times a week, one group did four four-minute intense sessions (running on a treadmill as fast as they can) with rest intervals, while the other group did one four-minute intense session.

The four-minute men had increased their endurance and showed other positive health results on par with the men doing four sessions per workout.

The researchers qualified the study by saying that the program should be viewed as a kick-start to more exercise, though that part got lost in much of the media coverage. The take-away in some cases was: We don’t need a lot of exercise to be healthy.

Minutes-long workouts offer health improvements for otherwise inactive people. But things get flabby when the fruit of short workouts is compared to that of workouts adding up to 150 minutes or more a week. Nuria Rosique Esteban, a health researcher at the Human Nutrition Unit at the Pere Virgili Institute in Reus, Spain, points out that there are no peer-reviewed studies showing that minutes-long workouts offer the same health benefits as workouts in line with standard guidelines.

For Fitbit walkers, 10,000 steps a day, or 5 miles, is a typical goal (though not a guideline standard). But a study in last month’s The International Journal of Obesity suggested that 15,000 steps are better. The paper compared the health of 56 mail carriers in Glasgow, Scotland, who walk much of the day making deliveries, with the city’s 55 postal office workers, who sit most of the day. The study, conducted by researchers at the University of Warwick in England, found that many carriers were averaging 15,000 steps a day (most people walk 5,000 steps). The mail carriers all showed low risk of cardiovascular maladies.

Compared to the mail carriers, the office workers had fatter waistlines, higher BMIs and other metabolic risk factors for heart disease. Between home and work, many office workers sat for 15 hours a day, the researchers found. Assuming they had eight hours of sleep, these workers were on their feet for only one hour each day.

The study indicates that 15,000 steps per day, or 7 miles of walking, “is the level of activity we need to be healthy,” says William Tigbe, a lecturer at the University of Warwick’s medical school and lead author of the study. “This can be done in two hours, spread throughout the day while at work and at home.”

Or should we walk even farther? The Tsimane people of Bolivia walk 17,000 steps a day, and partly due to their healthful natural diet, they have an extremely low risk for heart disease, according to a study published in the British medical journal The Lancent in March. In fact, these Amazon people “have the lowest reported levels of coronary artery disease of any population recorded to date,” the paper says.

In a study recently published in JAMA Oncology, 384 older women were divided into two exercise programs: one was 150 minutes and the other 300 minutes of moderate/intense aerobic exercise each week. The latter group lost significantly more body fat over the 12-month study period, decreasing their risk of heart disease and cancer.

In other words, 300 minutes, or one hour of exercise five times a week, was better than 150 minutes.

The Centers for Disease Control and Prevention (CDC) suggests 300 minutes for people age 55 and older or other people who want additional health benefits.

But it doesn’t stop there. The CDC and other health agencies also suggest strengthening exercises twice a week of all major muscle groups. If 60 minutes is allocated to strengthening, we are now at 360 minutes, or six hours, of weekly exercise.

Even with 360 minutes, fitness might be elusive. Studies show that chunks of inactivity negate workout benefits. And, no, making dinner and grocery shopping don’t count as being active. You need to do tasks that raise your heartbeat.

In a study published this year in PLOS ONE, researchers tracked the physical habits of more than 5,500 overweight people between ages 55 and 75. The most fit were those who exercised the recommended amount but also were active throughout the day, as opposed to people who exercised but who otherwise were couch potatoes and desk sitters. “Increased time spent in moderate-vigorous physical activity, but not in light physical activity, was associated with better cardiometabolic health,” says Esteban, who was lead author of the paper. People need to “exercise more while reducing sedentary time,” she says.

Tigbe says prolonged sitting wipes out exercise benefits. In the postal worker study, researchers found an association between workers who sat the longest each day and an increase in metabolic risk factors.

The key is to keep moving at work and at home. Take a walk at lunchtime. Take the stairs rather than the elevator. Get up from your desk or couch to walk and stretch.

And finally, watch how much you eat. A person weighing 155 pounds burns 300 calories by walking one hour. That’s less than the calories in a McDonald’s cheeseburger. “It’s easier to cut down on energy intake than to increase energy expenditure,” Tigbe says.