More than a century ago, anti-vaccination groups also opposed vaccines for the sake of medical liberty and belief in alternative medicines. But they differed from groups today in several key ways. 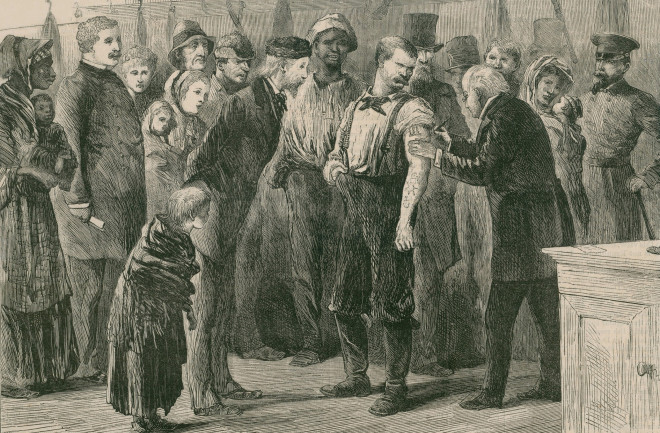 Three years ago, I wrote a story for Discover that outlined the long history of anti-vaccination sentiment in the United States. Back then, the nation was experiencing a wave of measles outbreaks across its metropolitan centers in places like Kansas City, Austin, Seattle, Portland and Phoenix — all as a result of parents choosing not to vaccinate their children against this highly infectious disease.

At the time, COVID-19 didn’t exist, and many never would have imagined a virus like this ripping through the country like wildfire. Many of the illnesses we vaccinate against today are gone or mostly gone. We don’t see smallpox, polio or mumps ravaging our population, so it can be easy to forget the damage that these diseases can do, and to think that vaccinations are no longer a necessity. But COVID-19 changed that.

We’re now watching more than 1,000 Americans dying at the hands of this disease every day, even following the FDA’s recent approval of one of the vaccines. There’s a number of reasons why people might opt out or delay getting the coronavirus vaccine: Some say they’re willing to get the vaccine, but are waiting for time to pass because they think it’s too new. Others are concerned that a different more effective vaccine may come out later in response to newer COVID-19 variants. And still some feel they’re young and healthy enough to put it off entirely.

But while not everybody who hasn’t gotten the shot is staunchly opposed to it, a significant number of Americans remain firm in their refusal. Some are even willing to take horse de-worming pills rather than get the jab, even as patients pack ICUs across the country. And according to the Centers for Disease Control and Prevention, unvaccinated people are 29 times more likely to be hospitalized as a result of the virus.

Peter Hotez, the co-director of the Center for Vaccine Development at Texas Children’s Hospital, says that many of the same anti-vaccination groups fueling resistance to the vaccines existed before the pandemic. But they’ve recently been thrust into the spotlight by the high-profile nature of COVID-19. Most notably, the "Disinformation Dozen,” which includes anti-vaccine activists like Robert F. Kennedy Jr., Joseph Mercola and other longtime anti-government conspiracy theorists. Hotez says that these groups have also worked to convince minorities and immigrants, who are more likely to be vaccine hesitant because they’re often less trusting of public health officials.

“These are not mom-and-pop grassroots organizations; they’re well-funded, well-organized entities, with some 58 million followers,” says Hotez.

Another problematic spreader of health misinformation comes from a group on the political right, known as the "health freedom movement." Many of these activists claim that their “medical liberty” outweighs public health concerns, even at the risk of death. They also tend to oppose mask mandates and social distancing. The issue has become a political wedge, opening the door for the third piece of what Hotez calls the “three-headed monster”: He says that the Russian government is trying to use anti-vax misinformation on social media to divide the nation, just as it did during the election of President Trump.

Together, these groups have combined to cause a lot of harm, especially in parts of the country where vaccination rates are particularly low, such as Mississippi, Louisiana, Alabama, South Carolina and Tennessee. But as unsettling as it is, this wouldn’t be the first time that anti-vaccination groups and vaccine refusers threatened public health. More than a century ago, when another lethal virus — smallpox — was enveloping the nation, similar groups pushed the same anti-science rhetoric.

The Anti-Vaccine Movement: Then and Now

American historian Michael Willrich, author of Pox: An American History, says that many of those in the anti-vaccination movement toward the end of the 19th century were essentially doctors of alternative medicine. These individuals felt marginalized by science-based medical care in many cases, and displaced by state licensing requirements. Often, they simply didn’t want to conform to the nation’s new version of medicine. Another cross section of anti-vaxxers were writers, thought leaders and intellectuals who held anti-government views and felt the state should not be involved in matters of health. “Medical liberty was a rallying cry of the anti-vaccination movement in the early 20th century,” says Willrich.

It’s easy to see how these groups could resemble anti-vaccine groups in the age of COVID-19. Today, we still see alternative medicine practitioners, like Joseph Mercola, an osteopathic physician who makes money selling books and nutritional supplements on his website. Mercola is considered one of the biggest spreaders of health misinformation around COVID-19 vaccines, publishing over 600 articles on Facebook that question vaccine safety and selling vitamin D supplements that he claims improve immunity and reduce risks around COVID-19. Contemporary anti-government and anti-state groups are also similar to those that existed 100 years ago. These include groups like Stand for Health Freedom (SHF), which opposes mask and vaccine mandates, as well as advocating for religious freedom in matters of health.

But the difference between historical groups and those today, says Willrich, is in their reach. Organized leagues and social movements at the turn of the century were comparably small. He adds that the majority of vaccine refusers weren’t a part of a larger movement, but simply refused to get vaccinated — often because they were scared of the vaccine at a time when vaccinations weren’t regulated for safety in the way they are today. Some ran away when public health officials came to their neighborhoods. They pulled their kids from school and, in other cases, rioted. Poor minorities in the South and immigrants in large cities like Boston, Philadelphia and New York were among the most hesitant at the time. “Minorities and immigrants were more likely to have felt the heavy hand of the state,” says Willrich.

These marginalized populations were acutely aware, he says, that they were more likely to be vaccinated through more authoritative means. In his book, Willrich documents many instances of Black Americans and immigrants being forcefully vaccinated against their will. These racist practices have likely helped fuel modern-day vaccine hesitancy among disenfranchised groups.

The Politics of Anti-Vaccination Groups

Still, what’s striking about our present struggles is the extent to which vaccine hesitancy and vaccine refusal have become so politicized, Willrich says. At the beginning of the 20th century, compulsory vaccination was not used as a political wedge, and refusers did not fall within a certain party or affiliation. Today, those who have spread misinformation about vaccines — and anti-vaccination sentiments along with it — include conservative members of the United States House of Representatives and Senate, as well as many right-leaning news outlets. Some of these prominent conservatives and news organizations have abruptly changed their tune in recent months, though, and are now encouraging vaccinations.

A century ago, anti-vaccination groups held small gatherings and handed out pamphlets. They had a few newsletters — most famously, The Liberator, a magazine edited by then well-known anti-vaxxer Lora Little of Minneapolis. But newspapers, which were the most widely dispersed media at the time, wholeheartedly backed compulsory vaccination. Today, major news outlet hosts like Fox News’ Tucker Carlson have taken to anti-science rhetoric, making statements about the vaccines’ lack of effectiveness. Newsmax host Rob Schmitt even stated that vaccines were “against nature.”

Still, the biggest dispenser of modern vaccine misinformation comes from the internet and social media.  According to a report from the Center for Countering Digital Hate, The Disinformation Dozen mentioned above is responsible for up to 65 percent of anti-vaccine content found online and in social media.

“The extraordinary reach of the internet and the misinformation that goes along with it is at everyone’s fingertips,” says Willrich. And since 9 out of 10 COVID-19 deaths are now among the unvaccinated, quickly changing the minds of this population is an issue of life or death importance.

More From Discover
Technology
The Hidden Science Behind Video Games Like The Last of Us
Planet Earth
What is the Doomsday Clock and Why Should You Care?
Health
Scientists Say Corpses Can Carry and Spread COVID-19
Health
When You Should Get the COVID-19 Booster After Infection
The Sciences
Our Top 10 Science Stories of 2022
Health
Could COVID-19 Be Changing Who We Are?
Recommendations From Our Store
My Science ShopDiscover STEM Kits
My Science ShopDiscover 2022 Calendar
My Science ShopStrange Science
My Science ShopElements Flashcards
Shop Now
Stay Curious
Join
Our List