Skipping vaccination isn't new. And like today, many in the 19th Century anti-vaccination movement hailed from large cities, were educated and earned a decent living. 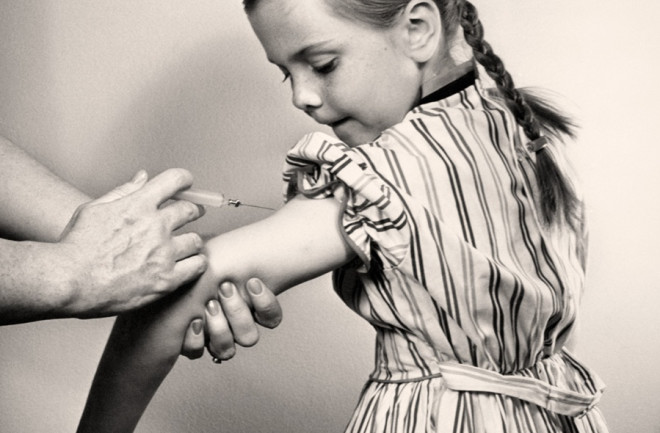 In December 2014, a handful of Disneyland tourists left the California theme park with more than just memories of Mickey Mouse and Space Mountain. They also left with the measles.

Within weeks, 125 cases were confirmed in the United States. Of the adults and kids infected, 110 lived in California — and nearly half had not been inoculated with the vaccine for mumps, measles and rubella (MMR), according to the Centers for Disease Control and Prevention. Ultimately, the outbreak resulted in 147 measles cases.

The disease spread because people had not been fully vaccinated, according to a 2015 analysis published in JAMA Pediatrics. The culprit was America’s growing anti-vaccination movement.

Measles is a highly infectious disease with symptoms including high fever and severe rash. In rare cases, complications can lead to encephalitis, a brain inflammation that causes seizures. Ninety percent of people exposed to someone with the virus will become infected unless they’ve been immunized or had measles before. Through the middle of the 20th century, up to 4 million Americans got measles each year, and hundreds died. But after two centuries of vaccine improvement and subsequent inoculation enforcement, the CDC announced in 2000 that measles had been eliminated in the U.S.

And yet measles keeps popping up in large U.S. cities, such as Seattle, Portland, Phoenix, Austin and Kansas City. The outbreaks are typically due to white middle- and upper-class parents choosing not to immunize their children. And the problem appears to be getting worse.

“In Texas, 57,000 kids didn’t get vaccinated this year,” says Peter Hotez, co-author of a paper on the vaccine movement published this year in PLOS. That’s double what it was five years ago, he says. States like Texas allow legal loopholes called nonmedical exemptions, which give parents the right to refuse vaccinations for their children on the basis of religious, philosophical or personal beliefs.

Skipping vaccination is not new in America. The country got its first taste in the 19th century. Like today, many who chose not to vaccinate their children hailed from large cities, were educated and earned a decent living. Their reasons for opting out also mirror those of modern activists. But instead of refusing MMR, the first American vaccine opponents were refusing inoculation for a virus we almost never hear about today.

Birth of a Movement

By the 19th century, smallpox had been killing people for centuries. Once infected, patients had a 3 in 10 chance of dying.

In 1796, British doctor Edward Jenner developed a vaccine for the virus. It’s based on exposing people to cowpox virus in a small dose, which activates the immune system. As more people get vaccinated, it creates herd immunity, which gives the virus no place to go because it can’t pass from person to person. This is how diseases eventually become eradicated.

The vaccine arrived in New England in 1800 and was immediately embraced by Thomas Jefferson. Starting with Massachusetts in 1809, and for decades after, states including Minnesota, West Virginia and California enacted mandatory vaccination laws.

But pushback was happening, as well. Most of it came from middle-class citizens who didn’t trust government, science or medicine.

Images from an anti-vaccination publication from 1892. (Credit: The Historical Medical Library of The College of Physicians of Philadelphia)

Rebellion against what is considered excessive government oversight is as American as apple pie and Chevys; in 1882, abolitionist Frederick Douglass told a reporter that mandatory vaccines encroached on people’s liberty and freedom of choice. And although medicine had made substantial advances in the 19th century, it was still finding its way. For example, some doctors still practiced bloodletting, sometimes by affixing leeches to a patient’s skin, as a remedy for anything from acne to strokes. And it wasn’t until 1902 that vaccine manufacturers were federally regulated.

Around that time, Boston doctor Immanuel Pfeiffer declared that healthy people were not at risk from smallpox. To prove his point, he visited a hospital on Gallops Island in Boston Harbor, where infected patients were being quarantined. He caught the virus and nearly died, but continued to oppose vaccines.

Lora Little of Minneapolis believed compulsory vaccine laws impinged on people’s personal liberty and parental authority. Her activism was driven by the death of her 7-year-old son in 1896, seven months after his vaccination. Little attributed his death to the vaccine. Several years later, she became editor of The Liberator, a magazine critical of modern medicine, including vaccination.

Organized opposition to vaccines was also ramping up. In 1879, a wealthy businessman named William Tebb founded the Anti-Vaccination Society of America in New York. Other leagues popped up in Pennsylvania, Maryland and Massachusetts.

By the early 20th century, nearly half of the states had vaccine requirements. But enforcement was uneven, and some states repealed mandated inoculations because of vaccine protests, writes Michael Willrich in Pox: An American History.

The turning point came in 1902. A smallpox outbreak in Cambridge resulted in the city making inoculations mandatory. (Massachusetts had created legislation giving cities power to mandate vaccines.) Officials enforced the legislation, bumping heads with residents, one of whom was named Henning Jacobson. He had refused the vaccine, claiming that as a child an inoculation had made him sick. Jacobson also said his son had become ill after being vaccinated.

The city filed charges against Jacobson, and the case wound its way through the courts, eventually reaching the U.S. Supreme Court. In a landmark decision in 1905, the court affirmed that states had the power to create laws making vaccinations mandatory.

Physician Edward Jenner developed a smallpox vaccine in the late 18th century that began the eradication of the disease. (Credit: PopperPhoto/Getty Images)

After that decision, activism quieted until 1982, when a documentary aired on American television called DPT: Vaccine Roulette. DTaP, as the CDC calls it, is a triple vaccine for diphtheria (a bacterial infection), pertussis (whooping cough) and tetanus. The documentary focused on the inoculation’s supposed health risks, told many times through interviews of mothers with sick kids. But health officials said the documentary overplayed the risks and ignored the benefits of inoculation.

Then, about 15 years later, the MMR vaccine took a hit. Physician Andrew Wakefield and colleagues published a paper in 1998 in the British medical journal The Lancet that claimed a possible connection between MMR and the onset of autism spectrum disorder. The paper immediately sparked criticism and was eventually retracted by 10 of the 12 authors.

But the damage was done. A small but vocal segment of the American population has remained skeptical of MMRs, and not necessarily because they think it causes autism. The reasons echo those of activists in the late 19th century, says Willrich: impingement on parental authority and personal liberty.

“Parents don’t like to be told how to take care of their children,” says Willrich.

Today, measles, smallpox, mumps, polio and yellow fever are gone or mostly gone, thanks to mandatory immunization. But that also means people have forgotten how horrible the diseases are, says Willrich. That has contributed to the rise of the anti-vaccine movement.

Continued education of the public about vaccines, and redoubling efforts to understand why people might be concerned, could cut back on the uncertainty and debate surrounding the life-saving treatment, says Willrich. “Vaccines remain mysterious to many people,” he says.

Though all 50 states make specific vaccines mandatory, most states allow exemption for religious beliefs, according to the National Conference of State Legislatures. And 18 states allow so-called philosophical exemptions, which offer a wide range of reasons to opt out.

After the Disneyland outbreak, the state of California passed a law removing personal belief exemptions from vaccination requirements. As a result, the number of unvaccinated kindergartners last year dropped to 3,133, the lowest that the state has seen in over a decade. More loopholes like this one need to be closed across the country, says Hotez, the director of the Texas Children’s Hospital Center for Vaccine Development.

“I’m worried,” he says. “With vaccination rates at just 40 percent in some schools, the next [outbreak] could be devastating.”