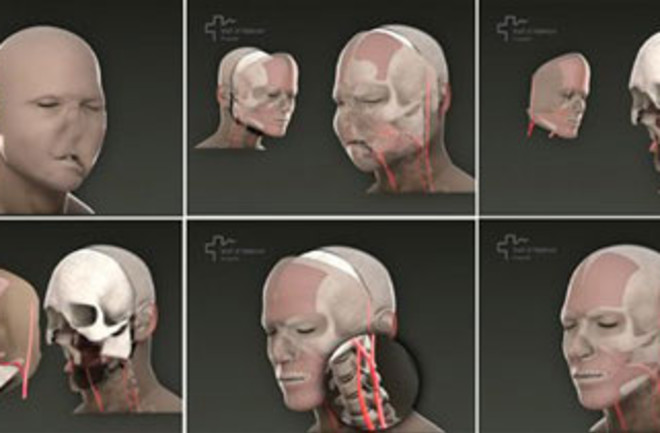 A hospital in Barcelona has announced that it has successfully carried out the world's first full face transplant. A team of 30 doctors conducted a 24-hour surgery on the patient who had lost most of his face in an accident; in the end the surgeons gave him new jaws, cheekbones, nose, teeth, skin, and other features.

The patient now has a completely new face from his hairline down and only one visible scar, which looks like a wrinkle running across his neck, said Dr. Joan Pere Barret, the surgeon who led the team [Associated Press].

She added that if you ran into the patient at the hospital now, you would not notice anything unusual. This is the first time that doctors have performed a total facial transplant. Over the past few years, partial facial reconstructions have been performed on ten patients, including on an American woman who suffered an unspecified trauma and a Chinese farmer whose face was mauled by a bear. All the patients were put on a strict regime of immunosuppressant drugs after surgery to ensure that their bodies didn't reject the transplanted bones, muscles, and skin, and were also given psychiatric counseling. The current Spanish patient is reportedly a farmer in his 30s who accidentally shot himself in the face in 2005. Prior to the face transplant, he had to breathe and be fed through tubes. After looking at himself in the mirror, post-surgery, he is said to be happy with his new visage. Related Content: 80beats:First American Face Transplant Is Successful (So Far) 80beats: Bear Attack Victim Gets Successful Face Transplant 80beats: Woman Gets Transplanted Windpipe That Was Grown in Her Arm Discoblog: Organ Transplants Gone Horribly Awry DISCOVER: How Do Transplant Patients Wind Up With Killer Organs?