Did the Lead in His Paints Kill the Baroque Artist Caravaggio? 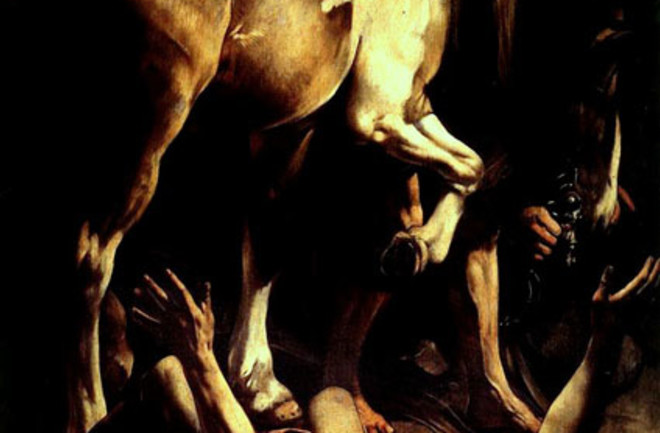 Behold La conversione di San Paolo (The Conversion of St. Paul), one of the masterworks of Caravaggio. The Italian artist of the Baroque era was famous for the chiaroscuro shading—dramatic contrasts of light and dark—evident in this conversion scene. But he was also renowned for living hard and dying young. Four centuries after his death, Italian researchers say they've found his bones, and they might know what actually killed him: the lead in his paints. First, the researchers had to find his remains. Caravaggio died in 1610 in the Tuscan town of Porto Ercole, but his remains were whereabouts unknown until a researcher claimed to turn up a death certificate in 2001 pointing to the crypts there. The bones the scientists found there matched a man aged 38 to 40 (Caravaggio's age range at his death) and dated to his era. And the DNA matched combinations found in people from the painter's hometown and sharing his original surname, Merisi or Merisio.

"There can't be the scientific certainty because when one works on ancient DNA, it is degraded," Giorgio Gruppioni, an anthropologist on the team, told The Associated Press. "But only in one set of bones did we find all the elements necessary for it to be Caravaggio's — age, period in which he died, gender, height." The group says there is an 85 percent probability they are right, though team leader Silvano Vinceti says that is conservative. "We are being cautious," he said. "As a historian I can say we have found the remains... All evidence concurs" [AP].

The bones in question carry a high concentration of lead, which convinced the researchers that Caravaggio—known to be messy with paints—unknowingly could have given himself lead poisoning. Despite the romantic allure of "dying for one's art," the explanation is fairly tame compared to the more exotic ends that Caravaggio's wild reputation suggested.

Michelangelo Merisi, known as Caravaggio after the Lombardy town where he grew up, was a young man at the height of his career in Rome when he killed a man in a brawl in 1606, fleeing to find new patrons in Naples and then Malta, only to be thrown off the island two years later for more brawling. "After a fortnight's work he will swagger about for a month or two with a sword at his side and a servant following him, from one ballcourt to the next, ever ready to engage in a fight or an argument," wrote one observer [The Guardian].

Rumors persisted the that painter died of malaria or syphilis, or perhaps crossed the wrong person and wound up murdered. Of course, the DNA-sampling researchers are only 85 percent sure their find in truly Caravaggio. So maybe he really did meet a more operatic end. Related Content: 80beats: Diagnosing the Illness That Killed Mozart, 218 Years Later

80beats: Beauty and the Brain: Men And Women Process Art in Different Ways

DISCOVER: The Natural History of Art