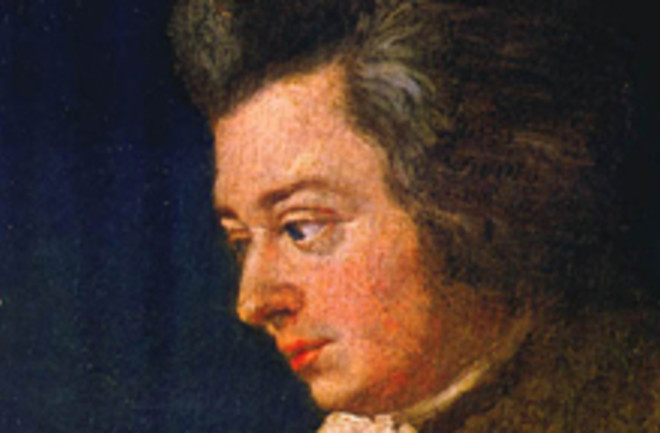 One of the greatest musical geniuses the world has ever seen might have been struck down at the height of his powers by a bacterial infection that school nurses yawn at. A new analysis suggests that Wolfgang Amadeus Mozart may have died of complications relating to strep throat. Mozart died on December 5, 1791 in Vienna after abruptly taking ill about two weeks before. The cause of death for the 35-year-old man

was recorded as “fever and rash,” which even in the 18th century were considered symptoms, not a disease. Many causes have been suggested over the centuries: syphilis, the effects of treatment with salts of mercury, rheumatic fever, vasculitis leading to renal failure, infection from a bloodletting procedure, trichinosis from eating undercooked pork chops [The New York Times].

As no autopsy was conducted at the time of death and the common grave that held Mozart's remains was later dug up to make room for new graves, modern medical sleuths have little direct evidence to go on. For the new study, published in The Annals of Internal Medicine, researchers compared

historical accounts of the maestro's illness - fever, rash, limb pain and swelling - with illnesses prevalent at the time of his death. They analysed more than 5,000 cases between 1791 and 1793 and found oedema (a swelling caused by the build-up of fluid beneath the skin) to be the third most common cause of death after tuberculosis and malnutrition. Mozart's body was said to be so swollen in his dying days that he could not even turn over in bed [BBC News].

What's more, the researchers found that in the winter of 1791 an usually high number of young men died of the illness known alternatively as edema or dropsy. An infection with a Streptococcus bacteria could have felled Mozart

because strep can inflame the delicate blood vessels in the kidney called glomeruli that filter wastes from the blood. Within 10 days or so of a strep throat or a strep skin infection, the kidneys can fail from this damage. Intense swelling, from buildup of fluid, is often the result [NPR News].

Whether that truly was how Mozart met his match remains a mystery, but the theory may have music lovers wishing for a time machine in which to send back a packet of antibiotics. Related Content: 80beats: Scientist Wants to Test Abraham Lincoln’s Bloodstained Pillow for Cancer 80beats: DNA Evidence Proves that Romanov Prince and Princess Rest in PeaceImage: Wikimedia Commons