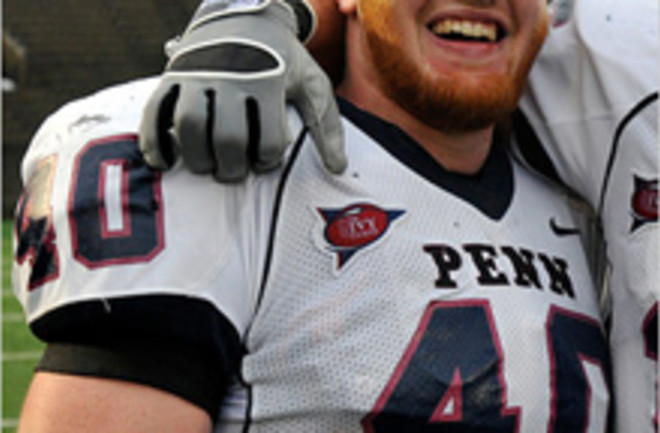 We're coming off the first weekend of the NFL season, full of the bone-crunching hits and brain-rattling tackles that fans have come to love. But never before have fans been so attuned to the consequences of that violence, with concussions and other brain injuries in particular gathering more attention than ever at the start of this autumn's season. And it's not just at the professional level. Owen Thomas killed himself this spring. He was 21, a defensive lineman and captain for the University of Pennsylvania football team, and he hanged himself in his apartment. Any out-of-nowhere suicide by a seemingly happy person leaves those left behind grappling for an explanation. But when doctors completed their autopsy of Thomas, they found something startling: evidence of incipient chronic traumatic encephalopathy (CTE), the condition caused by repetitive brain trauma that's been showing up in many former NFL players.

Doctors in the Boston University group and outside it cautioned that Thomas’s suicide should not be attributed solely or even primarily to the damage in his brain, given the prevalence of suicide among college students in general. But they said that a 21-year-old’s having developed the disease so early raised the possibility that it played a role in his death, and provided arresting new evidence that the brain damage found in N.F.L. veterans can afflict younger players. [The New York Times]

According to the Times, Thomas' parents—both ministers—wanted his case to become public to alert people about CTE. Thomas reportedly suffered no concussions during his life, but scientists believe the condition is the aggregate of constant collisions throughout a life in football. His mother, Kathy Brearley, says:

"The evidence coming in from Owen -- and it will have to be confirmed from much further study -- is that this [injury] is not just a question of a person getting big hits and then ignoring them," Brearley said. "This is a person getting many little hits, starting from a young age. Football linebackers might get 1,000 little hits. Now we're thinking these are like teaspoons. A thousand teaspoons of water could be the same as a big jug. It's possible." [Philadelphia Inquirer]

This season the NFL began dealing more publicly than ever

in the opening game this weekend; the team and its doctors will have to wrestle with the common question of how long someone must recover from brain injury before they can return to the field. With all the attention on head injury this year, the million-dollar question hanging in the air is: Is football fixable

? Or is brain injury, whether from a huge hit like a concussion or from a thousand small blows, an unavoidable fate for a worrying percentage of those who play the sport?

“It’s pretty hard to make a jump with one case,” said Dr. James Moriarity, the University of Notre Dame’s head physician, who oversees the athletic department’s medical care. “But if it’s true that that happened, it would kill the sport,” he said, referring to an amateur player getting C.T.E. “As a parent, it’s going to be hard to justify kids going out and doing that.” [The New York Times]

80beats: Is Playing College Football Enough to Damage a Brain for Life?