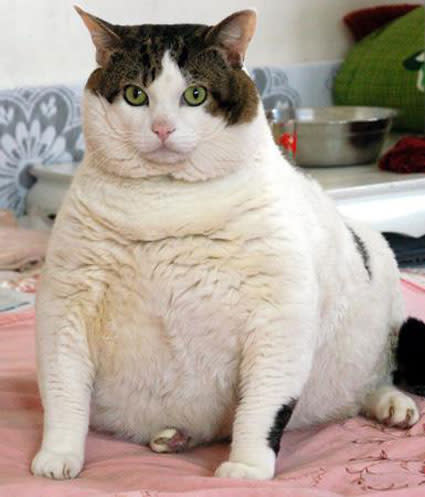 A prophetic story from The Onion in 2003 seems to be coming true: our pets and even lab and wild animals are becoming obese alongside humans:

Amid a barrage of commercials for new diet dog and cat foods, many owners say that their pets are being held to impossibly high animal-body standards perpetrated by the media. "I don't care what anyone says, my Sassy looks good," said Janice Guswhite.

Back in the non-satirical world, the findings are alarming. A study of over 20,000 animals

from 12 different populations, published in Proceedings of the Royal Society B, found that over the last 20 years the animals in every population they studied have been growing significantly tubbier, paralleling the human obesity epidemic. Not only pets are fattening up--the group also studied wild animals living near humans and animals living in labs and zoos. All of them have been chubbing-out over the last two decades. This could mean we are thinking about the obesity epidemic all wrong, lead author David Allison

"Now, we don't know why these increases occurred, but it invites some very interesting speculation," Allison says. The surge in human obesity is generally attributed to an increasing consumption of calories and a decrease in physical activity. "But maybe there are other things that are important--because those things can't be acting on the marmosets, or the rats and mice in the National Toxicology Program," he says.

Some of the increases can certainly be explained by increases in caloric intake; for example your typical city rat, which ballooned up 40 percent, could be getting a more energy-rich diet of human scraps than 20 years ago. On the other hand, populations like lab monkeys shouldn't be affected by changes to human habits, since they are raised on well-defined diets. Obesity researcher Jaap Seidell

, who wasn't involved in the project, admits that environmental factors like Adenovirus 36

(which can get into the water system) may play a role in the obesity epidemic. But he told Nature News

that each case of lab animals or wild animals ballooning up should be investigated individually before jumping to conclusions.

Other factors may also have changed. For example, over the past 30 years the number of rodents housed in each cage may have altered--which could very well affect the amount of exercise they get. "I think they are trying to deflect the attention from restriction of physical activity and high-energy foods," Seidell says.