Animal Prosthetics: False Limbs for Elephants, and Silicone Where You'd Least Expect It 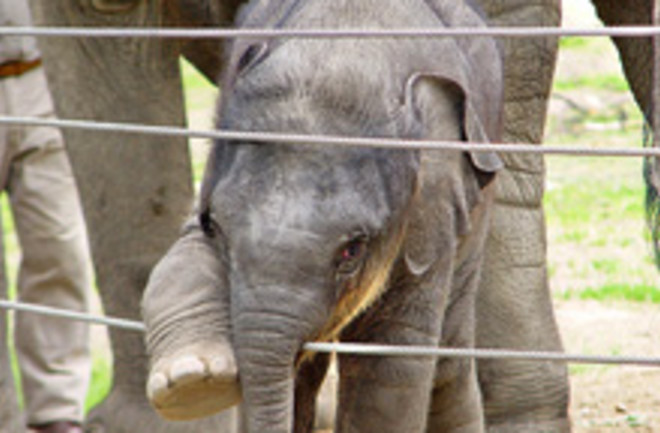 Lest ye think humans are the only recipients of prosthetics, here's proof otherwise: Mosha, a three-year-old elephant in Thailand, has just successfully received her second prosthetic leg. The pachyderm was just a baby when she stepped on a landmine and lost part of her front leg. (Unfortunately, this is not a rarity in Thailand, whose borders with Cambodia and Myanmar are populated with elephants and littered with landmines.) After her injury, she was brought to a sanctuary, where the staff didn't have much hope for her. But an amputation expert who normally works with humans fitted her for a prosthetic, which not only helped her walk, but even changed her social life. Other elephants at the sanctuary, who at first rejected Mosha, began to accept her once she had regained a fourth limb. After eating 200 pounds of food a day, she outgrew her old leg and needed to be fitted for a new one, which is made of plastic, metal, and sawdust (yes, sawdust). Amazingly enough, Mosha is not alone in the world of animal prostheses. Lovey, a horse in Arkansas, deserves special mention after a prosthetic successfully replaced her leg, which had been caught in a fence last year. Given that horses are usually shot the instant they break a leg, Lovey's limb is a striking achievement. Then there's Fuji the dolphin, who became sick at an Okinawa aquarium several years ago. Her tail started to rot and had to be amputated—but without a tail, Fuji couldn't swim. After the first two attempts to attach a prosthetic failed, engineers found success in the third design. With a tail made from silicone rubber, Fuji began swimming again as if the tail were her own. And over in Romania, Uzonka the stork received a prosthetic bill after the original was broken in an assault. And finally, there's our personal favorite: the researcher who mortgaged his home in order to fund the invention of "neuticles," or prosthetic testicles for dogs. Greg Miller said the point of the makeshift testicles was not to enable them to breed again, but just to restore their "self-esteem." Kind-hearted soul? Or just crazy? You decide. Related Content: Discoblog: Text Messaging: The New Way to Track Elephants 80beats: Elephant-Lovers Worry About Controversial Ivory Auctions in Africa 80beats: Memories of Hard Times Might Help Elephants Survive Global Warming ScienceNotFiction: Dr. Terminator: The Prosthetics Designer Who Makes Sci-Fi Sculptures