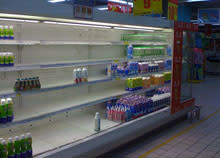 The toxic chemical melamine that has already contaminated Chinese milk and eggs may also have been widely used in animal feed, according to new reports from the Chinese state media. Chinese consumers were horrified when it was revealed in September that four babies had died and more than 50,000 were sickened due to tainted infant formula, and the outrage grew in October when eggs from four large companies were also found to be tainted. Since then, the widening scandal has caused companies across Asia to recall products made with Chinese milk or eggs, and the new reports suggest that there may be broader recalls to come.

Melamine can be used to make food products appear to have a higher protein content, and the new admission from the state-run media, which usually suppresses bad news, shows that the trick was commonly used.

"The feed industry seems to have acquiesced to agree on using the chemical to reduce production costs while maintaining the protein count for quality inspections," the state-run China Daily said in an editorial. "We cannot say for sure if the same chemical has made its way into other types of food," the newspaper added [BBC News].

Melamine is commonly used to produce plastics and fertilizer, and recent findings suggest that the melanine scrap (left over from the production of melamine) has become a commodity in its own right.

The Nanfang Daily said chemical plants used to pay companies to treat and dispose of melamine scrap, but about five years ago began selling it to manufacturers who repackaged it as "protein powder." Initially, the inexpensive powder was used to give the impression of higher protein levels in aquatic feed, then companies started added it to feed for cattle and poultry, the report said, citing an unidentified chemical industry expert. "The effect far more exceeds the milk powder scandal," the newspaper said [AP].

In Shanghai, the government is reportedly investigating more than 100 fish farming companies to see if they've been using tainted fish food.

Health officials urged consumers to stay calm when the tainted eggs were discovered, noting that there had been no known cases

of consumers becoming seriously ill from eating melamine-tainted eggs. Hong Kong officials said ... a child would have to eat about two dozen eggs in a single day to become ill [The New York Times].

said it was unlikely humans would get sick from eating meat from animals raised on melamine-tainted feed, because the amount of chemical in a few servings of meat would not be harmful. However, she added: "It shouldn't be in the food supply at all. It's fraudulent. And the animals really can't use it for nutrition, so it's not good for the animals" [AP].