If I say the phrases 'anti-ageing' and 'nutritional balance' to you, you'd probably think of the pages of quack websites selling untested supplements than the pages of Nature. And yet this week's issue has a study that actually looks at these issues with scientific rigour. It shows that, at least for fruit flies, eating a diet with just the right balance of nutrients can lengthen life without the pesky drawback of producing fewer offspring. 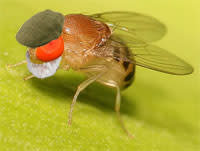 Despite the claims of the cosmetic and nutritional industries, chemicals or techniques that slow the ageing process are few and far between. We're a long way from any fountains of youth, but there is at least one conclusive way of extending an animal's life - restricting the calories it eats. It works in yeast, flies, worms, fish, mice, dogs and possibly even primates, but it comes at a cost. The dieting organisms had lower reproductive rates (technically, they had lower 'fecundity').

Scientists suspected that eating fewer calories mimicked the effects of famine and food shortages. In such conditions, parents who breed put their health at risk and their offspring's odds of survival are slim anyway. So animals divert their resources to maintaining their health at the cost of their fecundity. This explanation suggests that survival and reproductive success are at odds with one another - fewer offspring is simply the price of a longer existence.

But Richard Grandison and Matthew Piper have found that this isn't true. Working with Linda Partridge at University College London, they have shown that you can improve both the fecundity and lifespan of a fruitfly by supplementing its restricted diet with the amino acid methionine. The trick won't work in exactly the same way for other animals so don't go bulk-ordering methionine yet. However, the results do prove the point that flies can have their cake (or lack thereof) and eat it, provided the cake has just the right balance of nutrients.

Grandison and Piper fed Drosophila flies with diluted stocks of yeast, so they are the same amount that they would normally do, but had fewer calories to show for it. As usual, their lives increased and their reproductive rates fell. The duo tweaked the diet until it gave the flies the maximum possible lifespan and then systematically added back nutrients until they hit on some that would restore their fecundity while retaining their extra years.

Vitamins didn't do it; nor did fats or carbohydrates. Extra doses of essential amino acids improved fecundity but it brought lifespan down too, as if the flies had eaten a full meal in the first place. This shows that calorie-restricted diets do their thing because they change the levels and ratios of amino acids in a fly's food.

Grandison and Piper discovered that one particular amino acid, methionine, was crucially important. Methionine is a boon to reproduction, but it conspires with other amino acids to shorten lifespan. Without methionine, the flies lived to a ripe, old age but their fecundity faltered. The best combo was methionine on its own, without the other amino acids - that boosted fecundity and maintained the flies' extended lifespans. 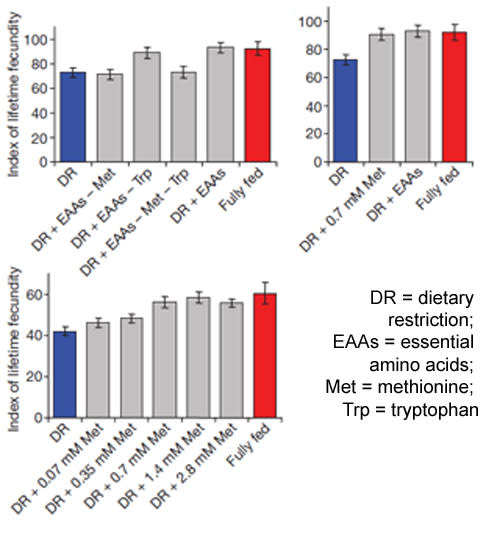 These results clearly show that survival and reproduction aren't opposed - you just have to get the right balance of nutrients. Getting that balance could be the key to achieving the same winning combo of longer life and better reproductive success without actually cutting down on the calories.

But clearly, there's a massive word of warning to all of this: methionine happens to be the magic ingredient for flies fed on yeast. Going out and buying methionine supplements is not going to turn you into an immortal Casanova. In this study, methionine only worked in a restricted diet where other amino acids are scarce. Likewise, in previous studies, mice and rats live longer if they cut down on methionine.

The main message from this study is that lifespan and fecundity don't always trade-off against one another - getting the ideal balance of nutrients unlocks the best of both worlds. It's likely that the same principle applies to other animals, because the biology of ageing is remarkably consistent across species, but we still don't know where the point of balance rests. Look on the shelves of a health store and you might think that we've got questions like this cracked. We don't - ageing research is in its infancy and there's a lot of work left to be done.