People in most parts of the world are living longer and longer, thanks to great leaps in medicine and sanitation over the last century. But these growing life expectancies bring with them a sense of unease. The biggest worry is the possibility that medical advances are artificially prolonging life with little regard for its quality. Old age, after all, brings with it an increased risk of chronic diseases such as cancer, as well as both physical and mental decline. 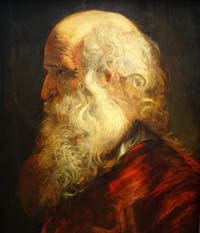 This is not just a moral question, but an economic one too. The "oldest-old" are the fastest growing demographic in Western countries. If this expanding part of the population is indeed becoming more and more dependent on care from relatives or the state, the costs to society will start to skyrocket. But new research from Denmark suggests that this grim vision of the future is a fictitious one.

Kaare Christensen and colleagues from the University of Southern Denmark found that the proportion of elderly Danes who manage to remain independent holds steady at about 30-35 percent between the ages of 90 to 100. Individual people certainly risk losing their independence as they get older but the unhealthiest ones tend to pass away earlier despite improvements in medicine. This means that from society's point of view, exceptional long-life won't lead to exceptional levels of disability.

The scale of Christensen's study is unprecedented. It exploited the fact that Denmark has kept a record of everyone living in it since 1968. Each person is assigned with a 10-digit identification number that links all their information across official registries. In 1998, Christensen's team used this resource to contact every one of the 3,600 people who were born in Denmark in 1905 and were still alive.

About two-thirds of this group of ninety-somethings agreed to take part in the research. Christensen assessed their physical strength, their ability to get on with daily life, their mental agility and whether they showed any symptoms of depression. His team then caught up with them again in 2000, 2003 and 2005. At every stage, there were a few drop-outs due mostly to deaths and terminal illness and by 2005, only 166 volunteers remained, all of whom were 100-years old.

These drop-outs tend to pose problems for studies like these that follow groups of people over time. But in this case, it gave the researchers a chance to compare the health of those who stayed with the study and those who didn't. As you might expect, they found that the drop-outs tended to have weaker physical and mental abilities and were more likely to show signs of depression than those who stuck with it.

At each of the four assessment years, the team found that the proportion of survivors who remained physically and mentally independent stayed remarkably stable. Even among the centenarians interviewed in 2005, a third were self-sufficient. 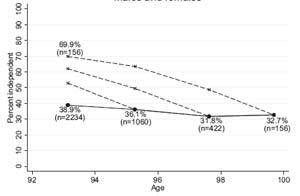 Does this mean that people don't become frailer as they age? Hardly. Remember that we're looking at the trends at a population level. At an individual level, the more expected trend of failing health is more obvious - for example, 70% of the people who would eventually live to 100 were independent at the age of 93 and this proportion fell to 32% over the course of seven years. The thing that separated the super-elderly from the elderly was that their decline of body and mind started later.

To picture this more clearly, imagine a group of a 90 friends all of whom are at a ripe old age. About 30 of them (a third) are fully independent and enjoying the rudest of health, while another 30 or so are severely disabled and very ill. Skip forward a decade or so and this very disabled fraction have passed away, leaving behind 60 of their friends. But the health of some of these survivors has also taken a turn for the worse; now only 20 people (out of the 60) are fully independent and another 20 have taken seriously ill. Note that while overall, the health of the group is failing, the proportion of independent people is still the same - a third!

So as the population ages, the most disabled people are likely to die off sooner, leaving behind a steady proportion of good health. That's good news for Western societies because it suggests that extending lives isn't going to wreak an overly exorbitant cost in terms of healthcare. Even with lives reaching beyond the 90-year mark, it's hardly the case that entire sections of society will be bedridden. Indeed, a recent study of 32 Americans aged 110 and over found that 40% of these "supercentenarians" could look after themselves.

Christensen's conclusions are backed up by another study by James Lubitz published in 2003. Lubitz looked at the relative healthcare costs of looking after people aged 70 for the rest of their lives. His team found that healthy 70-year-olds exacted less of a cumulative healthcare cost than those with partial disabilities, even though they lived for a longer time.

Christensen says that his research might seem like good news for society and bad news for the individual, but that there's reason to be optimistic. The study shows that people who survive to the highest ages have "a health profile that is similar in many aspects to most individuals who are 7 to 8 years younger". He also notes that while his study looked at people who were born in 1905, other research suggests that disability could be kicking in even later for people born in subsequent decades years.

In both Denmark and the US, overall disability rates have been falling since the 1980s. What happens in the future is anyone's guess - certainly, the fact that fewer and fewer people are smoking can only push back the onset of disability in old age, but the obesity epidemic may pull the trend back in the opposite direction.

Update: Jonah Lehrer at the Frontal Cortex deserves your time with a great piece on the recent spate of "age defiance" (think Madonna), with a nice lashing of neuroscience.