It's 1964, and a group of Canadian scientists had sailed across the Pacific to Easter Island in order to study the health of the isolated local population. Working below the gaze of the island's famous statues, they collected a variety of soil samples and other biological material, unaware that one of these would yield an unexpected treasure. It contained a bacterium that secreted a newantibiotic, one that proved to be a potent anti-fungal chemical. The compound was named rapamycin after the traditional name of its island source - Rapa Nui.

Skip forward 35 years and rapamycin has made a stunning journey from the soil of a Pacific island to the besides of the world's hospitals. Its ability to suppress the immune system means that it's given to transplant patients to stop them from rejecting their organs and its ability to stop cells from dividing has formed the basis of potential anti-cancer drugs. But the chemical has an even more interesting ability and one that has only just been discovered - it can extend lifespan, at least in mice.

David Harrison, Randy Strong and Richard Miller, leading a team of 13 American scientists, have found that capsules of rapamycin can extend the lifespans of mice that eat them by 9-14%. That's especially amazing given that the mice were already 20-months-old at the time of feeding, the equivalent in mouse years of a 60-year-old human.

There will undoubtedly be headlines that proclaim the discovery of the fountain of youth or some such, but it is absolutely critical to say up front that this is not a drug that people should be taking to extend their lives. Rapamycin has a host of side effects including, as previously mentioned, the ability to suppress the immune system. Harrison says, "It may do more harm than good, as we know neither optimal doses nor schedules of when to start for anti-ageing effects." So the new discovery doesn't put an anti-ageing pill within our grasp. It's far better to see it as a gateway for understanding more about the basic biology of ageing, and for designing other chemicals that can provide the same benefits without the unwanted risky side effects.

Nonetheless, it's still very exciting, especially since the nutrition market is already awash with supplements that claim to slow the ageing process but which have little evidence to back their claims. Likewise, scientists have tested a number of different chemicals but the few positive effects have typically been small or restricted to a specific strain of mouse. Rapamycin is different - as Harrison himself explains, "no other intervention has been this effective when starting so late in life on such a diverse population."

Rapamycin's new powers were discovered as part of the National Institute on Ageing Interventions Testing Program (ITP), an ambitious research programme that tests potential life-extending chemicals in mice. Green tea extract, aspirin, resveratrol (found in red wine) and simvastatin are all up for auditions. Anyone can 'sponsor' a compound that they feel is worth testing, provided that they make a decent enough case for it. If the chemical makes it through the initial screening, it is tested in three independent laboratories in Maine, Michigan and Texas, in the bodies of genetically diverse mice.

That's exactly what happened for rapamycin. It was fed to mice that were already 600 days old in three laboratories, all of which independently came to the same conclusion. Males and females that ate this special diet lived for 28% and 38% more time beyond the 600-day mark than their peers. The drug also increased the average lifespan of males by 9% and of females by 14% (defined as the point at which 90% of the mice were dead). Harrison puts these results into stark context: "By comparison, preventing ALL atherosclerosis and cancer deaths in humans would increase lifespan by less than 9%!" 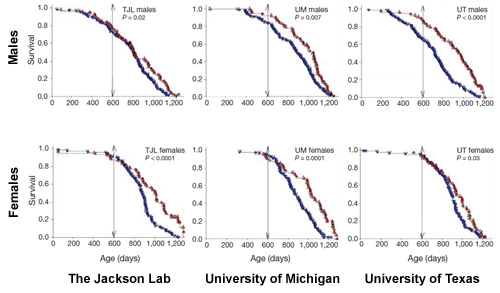 The effects of rapamycin are particularly exciting because it is a well-studied and very specific drug. It works by blocking a single protein - an enzyme called (aptly enough) TOR or 'target of rapamycin'. Blocking the actions of TOR affects the longevity of other simpler animals and we now know that the same trick works for mammals. In fact, TOR can now claim a very special honour - it is the first protein that has been shown to influence lifespan in every one of the four model species that scientists commonly use to study ageing: yeast, worms, flies and now mice.

TOR modifies other proteins and it has many targets. It sits in the middle of a massive communications nexus that controls several important goings-on within a cell. Through this widespread signalling network, TOR influences how cells grow and divide, how proteins are manufactured from RNA, how unwanted components are recycled in disposal units called lysozymes and how our cells' powerhouses - the mitochondria - provide them with energy. In invertebrates, all of these activities are important determinants of the ageing process.

TOR also has links to one of the few conclusive ways of extending a mouse's life - calorie restriction. When mice and other rodents eat fewer calories (without crossing the line into malnutrition) they live longer and their TOR becomes less active. Past studies have shown that this silencing of TOR underlies some of the life-extending benefits of leaner meals. Perhaps rapamycin simply mimics the effects of eating fewer calories, providing the same anti-ageing benefits without actually requiring the animal to eat less food.

But Harrison and co argue that this is just part of the story. In mice, restricted-calorie diets don't add much in the way of extra years if they're started after 550 days of age, and they always understandably lead to weight loss. But even older mice can benefit from rapamycin, and they do so without losing weight. To some extent, the drug's effects may overlap with those of calorie restriction, but it seems to do much more.

In animals, blocking TOR also provides some protection against the diseases of old age, including cancer and heart disease. Drugs inspired by rapamycin are even being used to treat some types of cancer, and being tested as weapons against many more. Being able to fight off cancer would certainly contribute to a longer life but when Harrison, Strong and Miller performed autopsies on some of their mice, they found that rapamycin wasn't extending life by protecting against any specific class of disease. It postponed death but didn't alter its causes.

Finding out how exactly rapamycin and TOR affect the lifespan of mice, and indeed working out if the same effects can be duplicated in people, will probably take up years of interesting research. As they stand, our knowledge about rapamycin has already been hard won. Certainly, the latest study was beset by both lucky events and less fortunate ones.

Getting here, and the road ahead 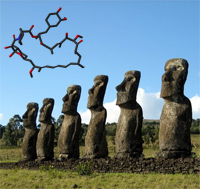 The decision to feed the drug to very old mice was the result of a "fortunate accident". At first, the researchers found that simply adding the drug to the animals' feed wasn't translating into high levels of their blood. They needed to imprison the chemical in a capsule, timed to dissolve within a mouse's digestive system and it took a year to develop this delivery system. Meanwhile, the mice that had been assigned to the study were getting on a bit. That would normally lower the odds that any chemical would successfully boost their survival, but it gave rapamycin the opportunity to show what it could do. The delay meant that the eventual results were all the more impressive.

Less fortuitously, the groups in the Michigan and Texas laboratories made an error in feeding the mice. They used different formulations of chow for the rapamycin and the control groups, so that the mice ate slightly different diets before the 600-day mark. Harrison openly admits the error ("we thought they were the same"), and he notes that in these labs, the males who ate rapamycin already had lower death rates than those who didn't before the point when they started eating the drug.

Based on these errors, it would be difficult to say conclusively if the animals' longer lives were the result of rapamycin or some other nutritional advantage. Thankfully, Harrison's own group at the Jackson Laboratory, saved the day. They raised all of their mice on exactly the same food before rapamycin was added to the mix, and they also saw that the drug extended lifespan. The female mice from all three labs add extra rigour to the results - their lifespans only started diverging once one group began their rapamycin diets.

So despite an unfortunate feeding mistake, the results still seem solid. Still, there are many questions to be answered, not least of which is what happens if you start giving mice the drug at a younger age. Harrison, Strong and Miller are starting to find out. They have begun to feed rapamycin capsules to mice at just 270 days of age and so far, these animals are also dying at lower rates than their peers.

These experiments will tell us more about the maximum benefit that rapamycin can provide. For now, the fact that the drug extends life even at old age is itself a heartening result. In a related editorial, Matt Kaeberlein writes, "The results... provide a reason for optimism that, even during middle age, there's still time to change the road you're on."