16% of Cancers Are Caused by Viruses or Bacteria 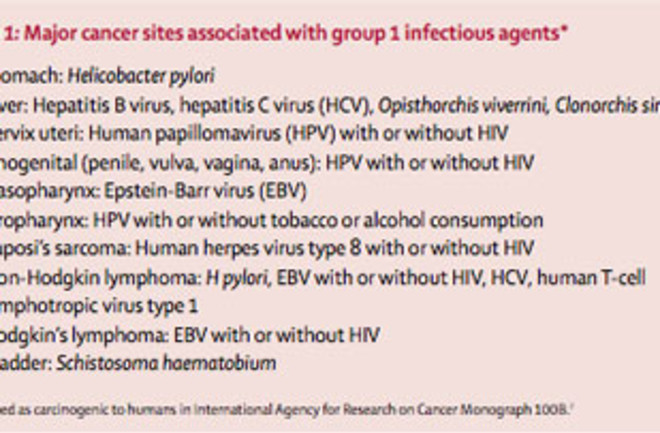 Where viruses and bacteria cause cancer

Strictly speaking, cancer is not contagious. But a fair number of cancers are clearly caused by viral or bacterial infections: lymphomas can be triggered by the Epstein-Barr virus, which also causes mononucleosis. Liver cancers can be caused by Hepatitis B and C. Cervical cancers can be caused by human papillomavirus, the major reason behind the development of a vaccine against it.  For some of these cancers, nearly 100% of the cases have an infectious link---when researchers check to see if a virus or bacterium is working in the tumor or has left signs of its presence in a patient's blood, the answer is nearly always yes.

A new paper in The Lancet takes a look at the very best data on the prevalence of infection-caused cancers and comes up with some striking numbers. Overall, they estimate that 16% of cancer cases worldwide in 2008 had an infectious cause---2 million out of 12.7 million.

Hepatitis B and C, HPV, and Helicobacter pylori, a bacterium that triggers stomach cancer, caused the lion's share of those cases, about 1.9 million together. Eighty percent of all infection-caused cancers were in less developed regions, where vaccines and treatments for these infections may be harder to come by, and sometimes the numbers are shocking: in China, more than a quarter of cancer cases were infectious in origin. But still, a decent fraction were in the developed world, indicating that the problem hasn't disappeared with current advances. And because this paper only looked infectious agents that are clearly carcinogenic, avoiding those there isn't much data on, 2 million cases total is probably something of an underestimate.

How many deaths from cancer are caused by these infections? The researchers didn't have the data to answer that question rigorously, but they point out that most of the infection-caused cancers are pretty lethal. They make a rough extrapolation from their data and estimate that of the 7.5 million deaths from cancer in 2008, 1.5 million, or about one in five, were caused by an infection.

That's a lot of deaths from preventable causes. It argues for more work on getting existing vaccines to the populations that need them and continuing research and education on vaccines in places where they're readily available.