Study: Climate Hacking Scheme Could Load the Ocean With Neurotoxins 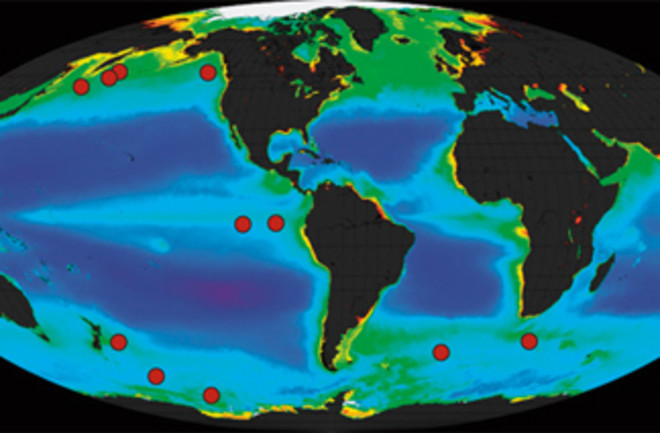 Of all the planet hacking possibilities floated as last-minute ways to stave off a climate catastrophe (building a solar shade for the Earth, injecting the atmosphere with sunlight-reflecting aerosols, etc.), iron seeding seems one of the more practical and feasible ideas. The scheme calls for the fertilization of patches of ocean with iron to spur blooms of plankton, which eventually die, sink, and sequester carbon at the seafloor. However, worries over the consequences of tinkering with the ocean ecosystem have held up plans to attempt this. And now, in a study in the Proceedings of the National Academy of Sciences, researchers claim that such a plan could risk putting a neurotoxin into the food chain. Iron seeders have targeted the large swaths of ocean surface with high levels of nitrate and low chlorophyll, where an injection of iron could potentially turn a dearth of plankton into a bloom.

But too many phytoplankton can be a bad thing, especially when it comes to members of the genus Pseudonitzschia. This alga produces domoic acid, which it spews into the surrounding seawater to help it ingest iron [ScienceNOW]

. Sea lions off California have gotten sick from the toxin. In Canada, three people died in the 1980s from eating shellfish that themselves had eaten Pseudonitzschia. Seeding experiments—about a dozen have taken place so far—had not shown the production of domoic acid. But oceanographer Charles Trick was not convinced, because those previous tests had harvested the plankton in the ocean but not tested them until the researchers returned to shore. So, for their study,

. The results were not encouraging.

collected in midocean and subjected to shipboard experiments produced plenty of domoic acid. “We found there is a lot of toxin out there,” he said. “If we were to seed with iron, the amount of toxin would go up” [The New York Times]

. In fact, Trick says, the concentration of Pseudonitzschia doubled, which increased how much domoic acid was in the water. In turn, the preponderance of the acid allows more Pseudonitzschia to grow, in a sort of feedback circle. Trick says he doesn't think the acid would make it all the way up the food chain to people, though birds might ingest it. But, he says, this is another sign that tinkering on the planetary scale can be fraught with unintended consequences. Related Content: DISCOVER: 5 Most Radical Ways to Squelch a Climate Crisis (slide show) The Intersection: Enviros Split on Geoengineering Conference 80beats: With $4.5M of Pocket Change, Bill Gates Funds Geoengineering Research 80beats: Iron-Dumping Experiment Is a Bust: It Feeds Crustaceans, Doesn’t Trap Carbon 80beats: If We Can’t Stop Emitting CO2, What’s Our Plan B? 80beats: Fighting Global Warming: Artificial Trees and Slime-Covered Buildings 80beats: Obama’s Science Adviser Kicks Up a Fuss Over GeoengineeringImage: NASA SeaWiFS Project (the 12 seeding experiments thus far)

More From Discover
Health
A Blood Test That Screens For Multiple Cancers At Once Promises To Boost Early Detection
Health
Decorate For the Holidays Early and it Might Improve Your Mood
Health
What You Can Do About Seasonal Depression
Health
Forget A "Twindemic," Experts Anticipate A "Tripledemic" This Winter
Health
Are COVID-19 "Rebounds" Only Possible After Taking Paxlovid?
Health
Year-Round Daylight Savings Could Threaten Our Sleep and Heart Health
Recommendations From Our Store
My Science ShopDiscover STEM Kits
My Science ShopDiscover 2022 Calendar
My Science ShopStrange Science
My Science ShopElements Flashcards
Shop Now
Stay Curious
Join
Our List