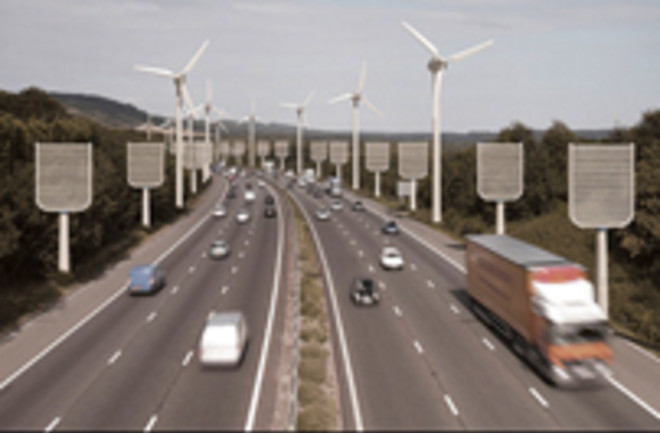 The most practical and immediate steps we can take to slow global warming may be lining roadways with towering "artificial trees" and covering buildings with algae bioreactors, argues a new report from Britain's Institution of Mechanical Engineers. The group believes that geoengineering (a broad term for climate-altering technologies) may be necessary to reduce carbon dioxide levels immediately, while governments continue to bicker about how to transition to a low-carbon future.

"Geo-engineering is no silver bullet, it just buys us time," said Tim Fox of the IME, who led the study [The Guardian].

Fox says the study (pdf) looked for techniques that could be rolled out with existing technology. The IME's first suggestion is to construct hundreds of thousands of

"artificial trees", essentially building- or goalpost-sized structures through which the wind blows. As air passes through them, the "trees" extract CO2 from it for later sequestration [The Register].

The fake trees are intended to be much more efficient at absorbing CO2 than real, biological trees, with current designs estimated to remove one ton of CO2 from the air daily. But even if the devices could be made ten times more efficient, the study found that 100,000 fake trees would be required to absorb the CO2 emissions from all the cars and trucks in the United Kingdom.

The second proposal calls for making cities truly "green" by

attaching tubes filled with algae to the sides of buildings. "Algae is a naturally-occurring eco-friendly biomass that tends to have a high level of CO2 use in photosynthesis," said Tom Bowman of IME. The algae that grows can be collected and turned into charcoal, which can be buried so that the CO2 it has captured is locked away from the atmosphere [The Guardian]—if everything works according to plan.

However, the study notes that such bioreactors are still expensive, and that it would be challenging to add them to existing buildings. At this point, the study, says, such technology is in the "conceptual stage," but given its potential benefits it deserves further study. The engineering group isn't the first to evaluate the plausibility of different geoengineering schemes. The IME's study professes to be a realistic look at the potential of implementing various technologies, and specifically excludes some of the more dramatic geoengineering suggestions, like placing giant sunshades in space or continuously sprinkling sun-blocking particles in the upper atmosphere. While such radiation-managing techniques may be more effective, the study says, they also carry more risks; if a large-scale project abruptly failed it would result in sudden, extreme warming, and such systems would also do nothing to change the acidifying effect of carbon dioxide in the oceans. That's why the engineers are supporting technologies that capture and store the excess CO2 already in our atmosphere. But the IME report seems unrealistic in its own way, in that it imagines a swift worldwide adoption of unfamiliar technologies. The IME has one more suggestion that does dabble in radiation management. Painting rooftops white in cities across the globe wouldn't reflect enough sunlight to have a significant impact on global warming, but it could reduce the "urban heat island" effect, in which acres of dark buildings and pavement cause cities to heat up more than their surroundings. Reflective rooftops would cool buildings and could

reduce energy used in air-conditioners by between 10 and 60 per cent, the report says [The Times].

The Institution's report is unlikely to be the last word on geo-engineering. Next week the Royal Society will publish a much broader study that reviews all the options - including the most outlandish, science fiction ideas like sun shades in space - and focussing on the ethical and political problems posed by tampering with the planet's climate systems [BBC News].