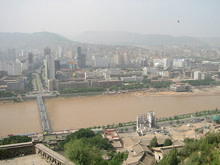 One-third of China's Yellow River is no longer fit for any use, and only one-sixth is safe to drink, according to a bulletin released over the weekend by the Chinese government. It reported the results of a 2007 study that surveyed water quality along the 5,464-kilometer-long river, which has become increasingly polluted from booming riverside industries and raw human sewage. Li Xiaoqiang of the Yellow River Conservancy Committee, which ran the study,

called for "urgent action" to save the river, and added forlornly: "I wish that a harmony could be achieved between development, utilisation and protection of the river someday" [Telegraph].

The 2007 study monitored the river's mainstream and its 35 tributaries,

with the combined length totaling 13,492.7 km, and found 4,557.6 km, or 33.8 percent of the waterways monitored, to have polluted water classified as type-five negative [XinHua]. The United Nations Environmental Program considers level five water to be unfit for drinking, aquaculture (such as fish farming and oyster farming), agriculture, and industrial use. Only 16.1 percent of the river water was rated level one or two, considered safe for drinking and household use. Of the 4.29 tons of pollution discharged into the river, industry and manufacturing contributed 70 percent and human sewage made up most of the rest, the bulletin reported. Specific pollutants were not reported. Wen Bo of the environmental group Pacific Environment said "It's not surprising...They are just treating the river as a dumping site. It's basically a sewage channel for the provinces that share the river" [AP].

The Yellow River extends west to east, originating from the mountains of Qinghai Province and emptying into the Bohai Sea. It is China's second longest river and the sixth longest in the world.

Often called China's "mother river," the Yellow River is tremendously important in Chinese culture, and the first signs of civilisation in northern China sprang up around the Yellow River basin, despite its frequent and devastating flooding. The river flows through China's industrial heartland, and many of the regions it passes are short on water [Telegraph].

A similar survey in 2006 found 31 percent of the river at or below level five, but total water volume was less then because of lower rainfall that year. A June report by China's Ministry of Environmental Protection indicated that 20 percent of nearly 200 rivers tested were not safe for use. However, reducing pollution along the Yellow River is especially difficult, officials say, because it runs through the arid north and because local governments maintain separate environmental protection bureaus.

[Li] said a move by the State Council, China's cabinet, to force factories to save energy and reduce pollution could eventually pay dividends. "It is a good thing, but it will take an arduous effort," he said [Telegraph].