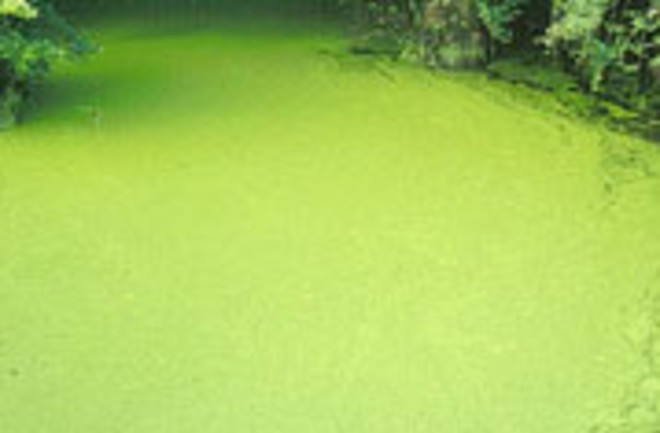 At the sailing venue for this summer's Olympic Games, a vast algae bloom has covered the coastal waters with a bright green slime. The Chinese government is scrambling to clean up the mess before the games begin in early August, and more than 1,000 fishing boats have already been mobilized.

"We can only haul the blue-green algae manually and we're doing all we can with our arms full and by the boat-load," said Wang [Haitao], a sailing spokesman for the Beijing Games organizing committee. "All you can see is fishing boats along the coast" [Bloomberg].

Besides being a concern to the sailors who plan to compete in the Olympic regattas, the algae explosion is also another instance of bad publicity highlighting China's polluted environment.

The country's three-decade economic boom has left its waterways and coastlines severely polluted by industrial and farm chemicals and domestic sewage [AP], whichcontain high levels of nitrogen that nourish the algae blooms.

The Olympic sailing events are scheduled to take place in the Yellow Sea near the coastal city of Qingdao.

The seaweed is making life hard for those training for the Games, wrapping around keels and stopping boats from getting up to speed.... Iain Percy, a gold medal winner in the 2000 Sydney Olympics, said he was worried by the seaweed's presence, only six weeks from the Games. He said: "It appeared in patches the size of football pitches which are impossible to sail through. How the organisers are going to be able to set a mile-long sailing course is a real cause for concern" [Daily Mail].

On a richly ironic note, China has promised to make the 2008 summer games the "green Olympics" by enforcing environmentally responsible policies throughout the events. But preparations for the games have instead called attention to the pollution in China's rapidly developing cities; most notably, athletes are worried about breathing Beijing's polluted air.

Beijing officials are shutting factories and taking cars off the road in a bid to reduce pollution in time for the Aug. 8 opening ceremony. The International Olympic Committee has said it will reschedule events if smog threatens athletes' health [Telegraph].