Why Your Kitty Gets High on Catnip

It’s fun to watch felines enjoy their favorite herb. Here’s how it works on them (and why it probably won’t work on humans). 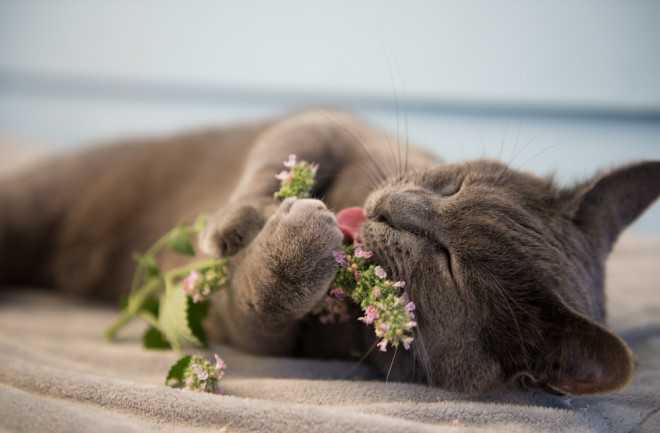 Boris was a sober, dignified cat. Except when he got a whiff of catnip. Once, Boris managed to lay his paws on a paper bag of the stuff we’d set aside to dry (for making catnip toys for Christmas presents). When he was done, the bag was in shreds, catnip was everywhere, and Boris was sleeping off what appeared to have been one heck of a trip.

Boris is by no means an aberration. Most cats (though maybe not all) have a deep love of Nepeta cataria, the plant more commonly known as catnip. When they get a whiff of this minty herb, they go a bit off their heads. They sniff, rub, bite, and roll around on the plant — or in the patch if they’re lucky enough to find the fresh stuff outdoors.

What is it about catnip that sends cats into such a frenzy? And what is your cat actually feeling when it’s in the throes of a catnip high?

The chemical in catnip responsible for making cats so happy is nepetalactone. But before catnip can work its mind-magic, it has to get the attention of a cat. It does this by mimicking the smell of cat sex hormones, explains Diane Delmain, a professor of veterinary medicine at Auburn University. That’s enough to attract the attention of most any feline, but the response is not a sexual one, she says. There’s a lot more going on with catnip than a plant tricking a cat into thinking it’s a potential lover.

You’ve probably known someone who says, “I don’t get it. I’ve tried marijuana, and it didn’t do anything for me.” It’s the same with some cats and catnip. Only about 60-70 percent of cats respond to catnip — or at least that’s what scientists used to think. A study published in 2017 suggested that all cats react to catnip. It’s simply that some go nuts, like Boris did, and others just zone out, adopting what researchers call a “sphinx-like posture,” becoming almost motionless and very quiet. If they had hands, they’d probably stare at them. Even cats who get crazy at first will often turn sphinx after their initial outburst.

Of course, there’s no way for a human to know what the subjective experience of a cat on catnip is, but it sure looks like euphoria. And there’s reason to think that’s exactly what the cat is experiencing. Some studies have found that naloxone, a drug used for the emergency treatment of an opioid overdose, blunts the impact of a catnip trip. So it seems likely that catnip’s effect has something to do with opioid receptors. Which could mean that it’s not just projection on our part — cats really are getting high.

Another intriguing thing about cats on catnip is the way they seem to be hallucinating. They appear to stalk invisible prey, play with invisible playmates, and stare intently at things we can’t see (though admittedly, even cats who aren’t on catnip often seem to stare intently at things invisible to their humans). There has been some conjecture that catnip is hallucinogenic to cats, says Delmain. But she points out that it’s only speculation.

Delmain is reassuring on one point, though: Cats don’t overdose on the stuff. “If they get too much catnip, it burns out their ability to detect it, and then they don't react again for a while,” she says. Don’t worry; the fun comes back after a while. You don’t need to worry about your cat getting addicted, either, she says.

Don’t Bogart That ‘Nip, My Friend

So if catnip does all this for cats, could it make humans high, too? Sorry, but you’d better stay out of your cat’s stash. Back in the ’60s, Delmain says, there were some claims that smoking catnip could cause humans to hallucinate, but those claims have not been verified. If catnip did get people high, it’s likely word would have gotten around by now. Headache and vomiting seem the more likely outcomes of human experimentation with recreational quantities of catnip.

That doesn’t mean catnip doesn’t have potential uses for us two-legged creatures, though. Catnip has been said to relieve insomnia, ease cramping and gas, and reduce anxiety. Though there is little research to back this up, there’s also not much to suggest catnip is dangerous when taken orally in small amounts. (It’s not recommended for children, however.)

So while a cup of catnip tea can’t hurt, and might be useful, when it comes to catnip’s more interesting effects, cats get all the fun. On the other hand, watching a cat enjoy catnip can cause a wonderful contact high.