Scientists blame ocean drag for the slender, 40-foot-long neck and huge body of the Elasmosaur. 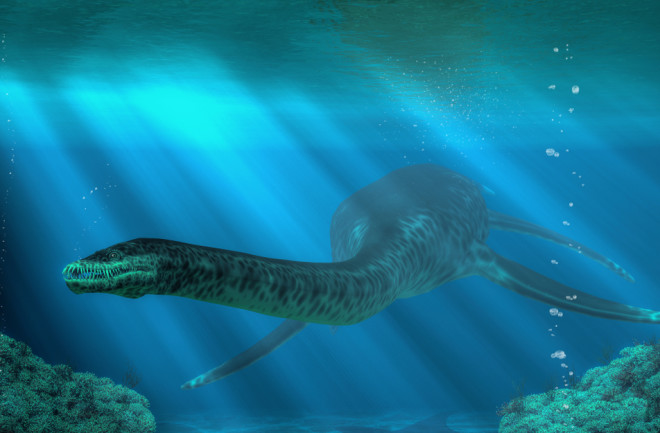 The ocean would have been a scary place 200 million years ago. There were plenty of apex predators like the Shonisaurus, a 30-ton marine reptile with a beak like a dolphin. And Dakosaurus, a one-ton prehistoric crocodile that made both fish and pterosaurs fear for their lives. But among the most famous prehistoric marine reptiles was the Elasmosaur, with its long, sleek neck, mouth full of sharp teeth and enormous body. If you saw one barreling your direction, you’d be sure to change course.

These curious creatures looked like something out of a science fiction novel and they’ve long left scientists wondering how they took shape. But new research published in the journal Communications Biology may have some answers. Researchers suggest that their huge size and long necks seemed to evolve simultaneously because their enormous body size mitigated the drag that their long necks created in the water.

“Fast rates in the evolution of neck proportions in the long-necked Elasmosaurs suggest that large trunks might have released the hydrodynamic constraints [caused by their] necks,” according to the study’s authors.

Elasmosaurs were a species of plesiosaur that swam in a similar manner to a modern-day sea turtle — a method that scientists refer to as “underwater flying.” They oscillated their large flippers as they whipped through the water. Their extended fins had evolved from legs as they moved off land and into the open waters.

We already know from modern aquatic tetrapods like whales and dolphins that a larger size is an evolutionary advantage in the open ocean, says lead study author Susana Gutarra Diaz, a researcher at the Natural History Museum in London. While they may expend more energy as their size increases, the energy expended per unit of body mass is smaller, she says. Additionally, there’s also some hydrodynamic advantages.

“As their size increases, the force they have to overcome in order to move through the water decreases relative to their size,” says Gutarra Diaz.

The purpose of their long necks is more of a mystery, though Gutarra Diaz is sure that it’s related to hunting and feeding. One theory is their long necks allowed for a sneakier attack on prey, with their huge trunks trailing behind. Elasmosaurs, for example, had among the longest necks, 43 feet in length, with a tiny head and sharp teeth – perfect for grabbing small, slippery fish. Still, she says there’s a lot to learn about how they used their necks and how flexible they were during swimming and feeding.

“What we know is that it would have been very costly to have a long neck and a small body,” Gutarra Diaz says.

The research definitely moves the ball forward, according to Robin O’Keefe, an associate professor of biological sciences at Marshall University who wasn’t involved in the study.

“The test of a good paper is that it answers questions and brings up new ones, and this does both,” O’Keefe says. “The study advances a well-found hypothesis, which says large body size is an evolutionary release. So, as you get into a very large body size, you can afford to have a really draggy long neck.”

O’Keefe says that while it’s a strong hypothesis, there’s still a lot we don’t know. He contends that the sample size was quite small and even more importantly, this evolution didn’t happen everywhere. In other parts of the world, huge plesiosaurs didn’t have long necks, which begs to question why long necks weren’t common across the globe.

“The only place we see super long necks is in the western interior, in other parts of the world, their necks were conservative in relation to their body size,” O’Keefe says.

It’s clear there was an evolutionary advantage to the Elasmosaurs’ super long necks, but we’re a long way from knowing why and how they benefited these prehistoric beasts. But whatever the reason, these massive reptiles continue to intrigue us 66 million years later. And researchers like Gutarra Diaz and O’Keefe will continue to unlock the ancient mysteries of these long extinct marine mega beasts.