The stars' distinctive spikes aren't real, but an illusion created by the way light interacts with the telescope. 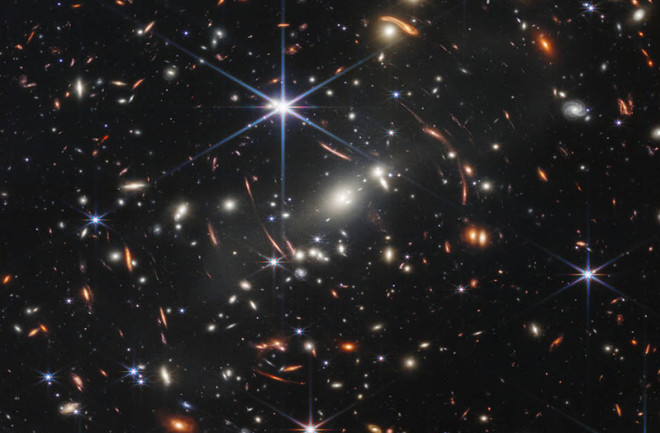 This image taken by the JWST — its first full-color capture — shows the galaxy cluster SMACS 0723 as it appeared 4.6 billion years ago. SMACS 0723 is gravitationally lensing numerous other galaxies far behind it, providing the deepest and sharpest image of the distant universe ever observed in infrared. (Credit: NASA/ESA/CSA/STScI)

When my 7-year-old son doodles a star in the night sky, it’s almost always drawn with five spikes. That’s how I learned to draw stars, too. But it begs to question: Since stars aren't spiked, why do we draw them that way in pictures? It may because stars, which are actually enormous fiery spheres, often appear with spikes in telescopic images. The Hubble Space Telescope, launched in 1990, still takes images of spiky stars.

But most recently, the first full-color image from the James Webb Space Telescope, the largest optical telescope in space, showed a universe filled with stars. When it was released to the public on on July 11, 2022, it revealed “a cluster teeming with thousands of galaxies,” according to NASA. But when you look closely, the stars in the image all have six large spikes, and two fainter horizontal spikes emanating from its center. Science can help explain why that is.

For starters, according to NASA, the spikes aren’t real; they’re the result of the diffraction of light. The brighter the star, the more likely we are to see spikes extending from its center. In the image above, the six bright spikes are the result of the way light hits the JWST’s enormous hexagonal mirror. The 21-foot mirror is capable of taking images that are so far away that we can study the history of the universe from the beginning of time.

Each of the 18 pieces which make up the huge mirror help to shape the way the light is reflected. Plus, Webb's hexagonal mirror is actually made up of a series of smaller mirrors — which have breaks between them and are also capable of reflecting light. The breaks in between the mirrors create rough lines of light that appear within the spikes if you look very closely at the image.

The Result of Struts

Unlike the first hexagonal mirror, the secondary mirror is circular which also impacts the way that light reflects off of it. As light from the star comes into the telescope, it has to bend around the struts which block the light. The JWST’s three struts result in six spikes because each strut produces two spikes that appear as right angles.

By contrast, the Hubble Space Telescope has four struts that hold up the secondary mirror and each strut results in a spike also held at a right angle from it. That’s why the famous images coming from the Hubble show four spikes instead of six. Not all images will include such spiky stars because the spikes are the most noticeable when the star is incredibly bright. The brighter the star, the brighter the spike.

The Hubble Space Telescope captured this stunning image of the tiny galaxy HIPASS J1131–31, which NASA dubbed the "Peekaboo Galaxy," in 2002. A bright, foreground star with four spikes — which isn't part of the galaxy — appears in the center of the image. (Credit: NASA/ESA/Igor Karachentsev)

As far as Webb is concerned, you may think that its hexagonal mirror (combined with the struts) would create an image with 12 spikes. But thanks to the JWST's smart design, spikes from the mirror and spikes from the struts perfectly line up to appear as six spikes. The only additional spikes that result from the struts are fainter, horizontal and seen along the center of the star.

The bottom line: Those stars that my son doodles of the night sky aren’t that inaccurate, after all. They’re the result of struts, and mirrors and the diffraction of light— a complicated optical artifacts that makes images of the night sky all the more beautiful.