Why Did We Evolve Brains in the First Place?

From humble beginnings to our complex modern minds, the story of how our brains developed through time might surprise you. A hint: It involves eating. 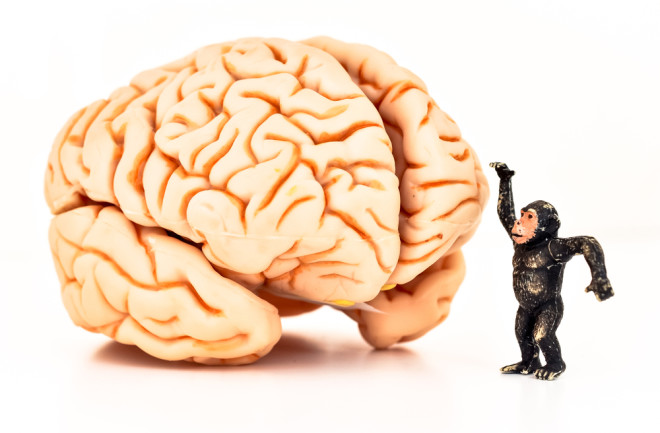 Up until roughly 550 million years ago, animals didn’t have large, sophisticated brains like the ones we see in various species today. From our perspective as humans, it’s easy to assume that brains evolved for thinking.

People often assume that evolution has progressed in an upward trajectory, from simple organisms to more complex ones. Because humans have such sizable brains (more specifically, our intelligence relates to the brain-to-body mass and cerebral cortex ratios), one might assume that we’re the most evolved. We have defined our animal kingdom superiority in terms of our smarts and our ability to think rationally. If we are supposedly at the pinnacle of evolution, then our brains must have evolved for thinking, right?

In reality, the content between our two ears may have transformed for far more rudimentary reasons. Neuroscientist and psychologist Lisa Feldman Barrett, director of the Interdisciplinary Affective Science Laboratory at Northeastern University, has developed a different explanation. In her most recent book, Seven and a Half Lessons About the Brain, Barrett breaks down our dearly held myths about what brains were actually meant to do.

Around five hundred and fifty million years ago, hunting set the evolutionary trajectory for today’s human brain, according to Barrett. Animals began seeing each other as meals, leading to predator-prey relationships. Creatures therefore had to evolve better methods to sense their environment, such as detecting movement through vibration or the presence of shadows. Overall, they needed reliable ways to discern whether something was a meal — or if they would end up one.

Once rudimentary sense perception had evolved, an animal’s efficiency in utilizing bodily resources began to determine their success. If a creature burned energy chasing what they mistakenly thought was prey, they wasted valuable assets that were crucial to their survival.

Animals generally depend on supplies like water, oxygen, glucose, hormones, adrenaline and nutrients to carry out tasks that are necessary for a given species’ survival (like running or reproducing).

These critters, like ourselves, only had a set amount of these resources that could be devoted to a task at any one time. Barrett calls this the body budget. “I think [the metaphor] captures something important about the ongoing decisions your brain must make regarding what energy to spend and when to spend it, considering the expected value of what you will get in return. Any movement should be worth the cost,” Barrett says.

Animals can replenish their budgets by eating, drinking, sleeping and resting. The most efficient way for animals to maintain this budget: predicting when they need to withdraw reserves, and when deposits are available. They get help from the body’s sensory surfaces, like the retinas in each eye and the cochlea in each ear.

“When you hear a loud bang or feel a tug in your chest, your brain has to guess at the causes,”  Barrett notes. “If your brain was reacting to the ambiguous information that is immediately present from your sensory surfaces, then you’d be swimming in a sea of uncertainty, flailing around until you figured out the best response."

That wouldn’t be very practical for survival, she explains. So, the goal of energy efficiency has likely acted as a major pressure in brain evolution.

In terms of utilizing a body budget more productively, predicting when a withdrawal is needed trumps simply reacting to environmental stressors. Animals that could prepare their bodies for a predator’s attack before it struck by, for example, using energy to increase their heart rate and send more oxygen to their muscle cells, were more likely to survive than those that waited and reacted.

Scientists recognize this process —  when the brain foresees situations and allocates appropriate resources to the body — as allostasis.

In Seven and a Half Lessons About the Brain, Barrett describes how ancient evolutionary pressures, like adapting to predator-prey relationships, propelled creatures to evolve bigger, more sophisticated bodies. With larger machinery, and more complex internal systems, body budgeting became a much more elaborate task.

Creatures needed to process an increasing number of variables, such as managing developing circulatory and immune systems, when assessing whether a withdrawal from their body budget would be worth it. In turn, they needed something that could process these variables. They needed a big brain.

Yes, that’s right. Brains didn’t evolve to help us ponder life’s philosophical questions. Instead, they emerged as the control center for body budgeting. Of course, human brains are capable of some impressive feats like inventing languages and traveling to the moon. Our fellow species with relatively large brains are no doubt very intelligent, too. But the abilities to feel, imagine and plan come from the brain’s simple, yet noble mission to keep our bodies functioning.