Is "Allostasis" The Brain's Essential Function?

A paper just published in Nature Human Behaviour makes some big claims about the brain. It's called Evidence for a large-scale brain system supporting allostasis and interoception in humans, but how much is evidence and how much is speculation? The authors, Ian R. Kleckner and colleagues of Northeastern University, argue that a core function of the brain is allostasis, which they define as the process by which the brain "efficiently maintains energy regulation in the body". Allostasis entails "anticipating the body’s energy needs [and] preparing to meet those needs before they arise." Kleckner et al. point to "physical movements to cool the body’s temperature before it gets too hot" as one example of allostasis. A concept closely related to allostasis is interoception, the process by which the brain receives information about the body's internal state from sensory nerves inside the body. 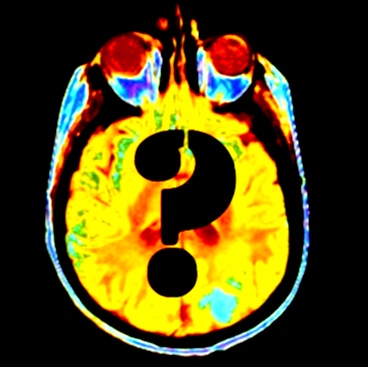 While allostasis and interoception are not new ideas, Kleckner et al. go into novel territory by arguing that allostasis is a fundamental process in the brain. All kinds of 'higher' brain functions, such as memory, cognition, and decision-making, "rely on" allostasis, according to this paper. The authors say that the evidence for this lies in the fact that widespread neural circuits are functionally connected with brain areas involved in allostasis:

Our work demonstrates a single brain system that supports not just allostasis but also a wide range of psychological phenomena (emotions, memory, decision-making, pain) that can all be explained by their reliance on allostasis... a highly connected functional ensemble for integrating information across the brain, with interoceptive and allostatic information at its core.

It's a big idea, and I think we need those in neuroscience, but in my view, Kleckner et al. provide little evidence for the existence of a widespread "allostasis-interoception" system in the brain, or for the idea that allostasis underlies other cognitive functions. The core of Kleckner et al.'s argument is the idea of a structurally and functionally interconnected set of brain regions. These regions include the dorsal mid and dorsal posterior insula (dmIns/dpIns), the ventral anterior insula (vaIns), the subgenual and pregenual anterior cingulate cortex ( sgACC and pACC) and anterior midcingulate (aMCC also known as dorsal ACC). Many of these regions are also connected with subcortical structures, including the hypothalamus and various brain stem nuclei. This connectivity is the basis for their centerpiece Figure 2, based on anatomical studies (tract-tracing) of structural connections in primates, and resting state fMRI studies in humans: 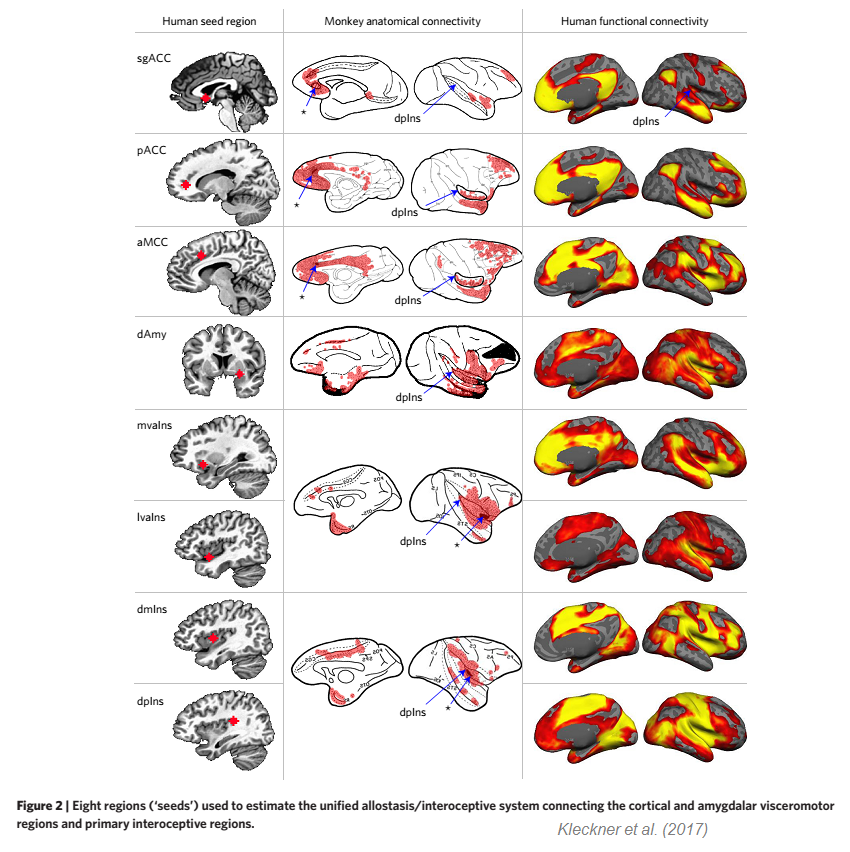 My concern here is not with the figure, but with the caption. Granted that these regions are all interconnected, why should we label them as "the unified allostasis/interoceptive system"? The argument is that some of the brain areas in the network have well-known roles in interoception (e.g. the dmIns/dpIns) and in allostasis (e.g. parts of the hypothalamus and brain stem nuclei.) But I find this logic questionable. Just because some of the brain areas in a network have a particular function, doesn't mean the whole network is based around that function. Take that logic to its extreme, and you could say that the entire brain (which is all interconnected) has any function you choose. Perhaps my brain is a network for controlling my left thumb. For another thing, the argument is based on reverse inference. I'm likewise not sure about Kleckner et al.'s argument that two much-studied functional brain networks, the default mode network (DMN) and the salience network, are in fact aspects of the allostasis system. This claim is based on the fact that their fMRI connectivity patterns overlap with that of the 'allostais network', but couldn't this same logic be applied in reverse? Couldn't we equally well say that the 'allostasis network' is actually an aspect of salience network? Where's the evidence that any of this connectivity is linked to actual cognition or behaviour? Kleckner et al. report that fMRI connectivity between two allostasis network regions, the aMCC and dpIns, predicts the degree to which people's subjective feelings of arousal correspond to their objective skin conductance response (SCRs) while watching emotionally evocative photos (n=41). As the dpIns is thought to be an interoceptive region, this result is consistent with the idea that the aMCC is involved in turning interoception into conscious emotional experience. But that's a pretty limited result; it's just two brain regions, and says little about the broader "unified allostasis/interoceptive system" which is the subject of the paper. So overall I don't think there's that much evidence here, certainly not enough to support Kleckner et al.'s suggestion that allostasis is the very purpose of all brains:

Perhaps most importantly, the allostatic–interoceptive system has been shown to have a role in a wide range of psychological phenomena, suggesting that allostasis and interoception are fundamental features of the nervous system... evidence suggests that brains did not evolve for rationality, happiness or accurate perception... the brain evolved to regulate allostasis.

There's also no evidence presented in this paper which bears on the question of how the brain regulates allostasis. Kleckner et al. refer to the concept of predictive coding, and they refer to their overall hypothesis as the EPIC model (Embodied Predictive Interoception Coding). However, nothing in this paper examined predictive coding. The authors say that more studies to test EPIC are on the way. Overall, this paper feels like two articles grafted together: an experimental paper (the n=41 study) with interesting, but fairly limited results; and a speculative review paper about an allostatic-interoceptive theory of brain function. As hypothesis, the ideas in this paper are certainly interesting. But to say that the data in this paper is evidence for the presented hypothesis is a stretch, in my view.

Ian R. Kleckner and the paper’s senior author, Lisa Feldman Barrett, kindly commented on a draft of this post. Here’s what they said:

We do think that you are perhaps misunderstanding one important point of the paper when you write: "Just because some of the brain areas in a network have a particular function, doesn't mean the whole network is based around that function" Neuroscientists have a habit of naming a network/system in line with their own interests. The default mode and salience networks have more aliases than Sherlock Holmes. In this paper, we highlight the domain general nature of these networks (see our Figure 5) but we also show that they interface with the body in important ways that are overlooked. This offers new insights and opens new questions for understanding, say, the role of interoception in memory, the role of concepts to be able to contribute to allostasis, and so on. Some of these topics are discussed in Lisa’s book, How Emotions Are Made, which you can read about here. We never claimed that default mode/salience network functions are based around any single function. When a particular collection of neurons fires in synchrony, meaning they are interconnected and serving a unified function, this does not mean that the network serves only that function, or even primarily that function. The whole point of the paper is to show that whatever else these networks are doing in a given instance (memory, concept formation, perception, etc.) they are also regulating allostasis and representing interoception. The paper builds off other papers we have written that make a similar point – see 1. 2. 3. The paper is not claiming that allostasis and interoception are the only functions of this network, or even the primary functions of this network. Such approaches to localization are inconsistent with our understanding of neural function. Default mode and salience networks are domain general in their function. And allostasis/interoception is part of the repertoire of those networks. It is not that these neurons sometimes do allostasis and sometimes do memory (or another psychological function). The point is that while they contribute to memory, to representing concepts, to language, and so on, they appear to simultaneously and always contribute to allostasis (your autonomic nervous system, immune system, and neuroendocrine systems are never off). On pages 6 and 7 of our paper, we write “The fact that default mode and salience networks are concurrently regulating and representing the internal milieu, while they are routinely engaged in a wide range of tasks spanning cognitive, perceptual and emotion domains, all of which involve value-based decision-making and actions, suggests a provocative hypothesis for future research: whatever other psychological functions the default mode and salience networks are performing during any given brain state, they are simultaneously maintaining or attempting to restore allostasis and are integrating sensory representations of the internal milieu with the rest of the brain….whatever else your brain is doing — thinking, feeling, perceiving, moving — it is also regulating your autonomic nervous system, your immune system and your endocrine system.” Allostatic changes always have sensory (interoceptive) consequences, and therefore interoception proceeds while you are remembering, making decisions, perceiving the world, and so on. Again, from page 7 of our paper, “Perhaps the most valuable aspect of our findings is in moving beyond traditional domain-specific or ‘modular’ views of brain structure/function relationships”.