The More We Learn About Crow Brains, the More Humanlike Their Intelligence Seems 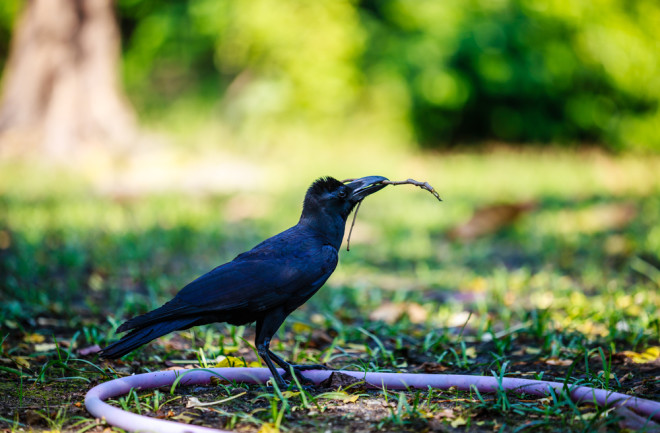 We’ve long known that crows exhibit extraordinary intelligence. These birds — along with ravens, jays and others in the corvid family — have inspired myths, legends and fables for centuries. But the more scientists unravel about their brain structure and behaviors, the more crows seem to resemble humans.

Remarkable leaps in corvid research have captivated John Marzluff, ornithologist at the University of Washington, for decades. He’s the guy on campus sporting a “Crowvid-19” face mask, with birds perched on the letters like powerlines. Beneath the mask, Marzluff is packing 40 years of corvid research in his own brain.

He's explored the exceptional size and function of crow brains, their long life spans (up to 30 years) and social lifestyle. The combination of these factors draws some striking similarities to humans. “Big brain, long life and sociality, those are really linked features,” Marzluff says. “You put those together, and it should sound pretty familiar.”

To top that off, just last fall other researchers determined that crows seem to exhibit a level of consciousness only attributed to humans and very few of our mammal relatives, such as primates. This work, along with many recent neurological studies, is redefining bird brains as we have known them.

The breakthrough study published in Science revealed that crows show signs of perceptual consciousness and an ability to have subjective experiences unique to their individual minds. This means the birds keep new information, or memories, in the front of their brains for extended periods, and use it in reasoning and navigating new situations they encounter.

The discovery piggybacks on new knowledge about the forebrain in crows, which has proven to be exceptionally large — another trait they share with humans. This region, known as the nidopallium, or NCL, closely resembles the prefrontal cortex in humans. For people and crows alike, the forebrain deals with higher cognitive tasks, including the synthesis of information, rational decision-making, problem-solving and executive function.

Taken together, these findings help explain dynamic problem-solving and tool use in crows that humans have observed for years.

The New Caledonian crow has recently gained popularity for not only tool use, but its ability to manufacture compound tools out of various materials. In a 2018 study published in Nature, researchers watched a crow combine as many as four elements to access food, something they had previously only seen in humans.

These innovative birds have been known to make probes, hooks and sharp spears that they use to skewer insects in hard to reach places. They also strip down palm fronds so that the main stem forms a J-shape that can grab food. In research labs, they've successfully bent wire to snatch baskets with food inside. And in some instances, they store these tools to use them again in the future if the opportunity arises, Marzluff says.

“They understand the concept of hooking and pulling and spearing and what tools are needed to do that,” he says. These reasoning skills appear to be significantly more advanced than more crude tool use, such as using rocks to break open shells and other food — which researchers have observed in some other animals.

“There are incidental uses of tools,” Marzluff says. “It’s not quite the same as having to take a different material and make it into something. Rocks, however, are good for pounding always.”

Some of Marzluff’s work specializes in crows’ ability to recognize human faces. His studies have shown how they pander to people who help them, such as caretakers responsible for feeding. And they have proven they can remember the faces of those who threatened them in a single negative event for multiple years afterward.

What’s more, people who have threatened crows might face harassment and scolding not only from the specific bird they harmed, but other members of its group. Birds have also been known to pass these perceived grudges or contempt to offspring and future generations.

Marzluff has been putting this reality to the test every year for 15 years with a specific group of birds. Each year, researchers approach the crows with a mask they wore when they captured some of the birds many years ago. And for 14 consecutive years, many have reacted by scolding and harassing — behavior they do not display toward other people. Marzluff plans to put this to the test again, for the 15th year, next month.

“They respond still to that face when I wear it around,” he says. “We captured seven birds wearing this mask, and it’s not uncommon to have 30 birds harass you now, none of which were the seven we captured.”

Crows also demonstrate unique adaptability in the natural and urban world. This sets them apart from many struggling animals and species that have gone extinct under the threat of human expansion.

For example, crows are found in all corners of the Earth, barring Antarctica. They are also supreme scavengers who have adopted an incredibly diverse diet: “They will eat anything, from vomit to steaks,” Marzluff says. “They will hunt things, and eat fruits and vegetables and all sorts of things.”

In his view, when you add all this knowledge together, the creatures demand a certain humility in humans. “The features of our life that we think are so unique and so high and mighty above all other forms of life, really aren’t,” he says. “The more we see other animals do the sorts of things we thought only we could do, the better we’re able to see ourselves.”