Why are Muslims in the United States well integrated?

The answer to the question in the title is no doubt multifactorial. Here are a few possible reasons: 1) Fewer numbers of Muslims proportionately 2) A more diverse population of Muslims, so reducing synergy between ethnicity and religion 3) An immigration policy which has resulted in a foreign-born population with higher educational qualifications than the native population, ergo, lack of synergy between socioeconomic deprivation and religion 4) America's more receptive attitude toward immigrants 5) America's economic system which has a "fluid" labor market, allowing newcomers to break into higher wage sectors more easily And so forth. But today reading a new Gallup report on American Muslims I thought of another one, which is easy to display in a chart: 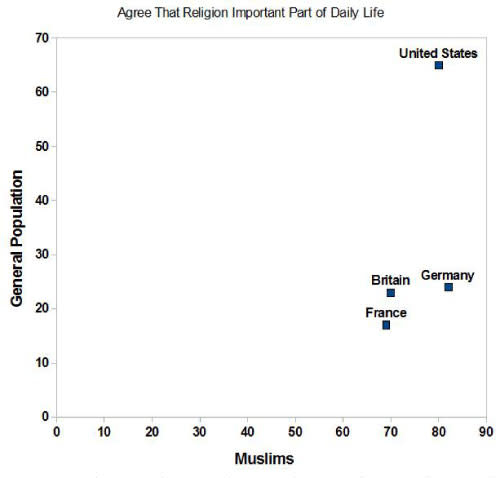 Here's a supplemental data source. As you can see,

In this reading, the relative lack of friction between Muslims & non-Muslims in the USA has less to do with the assimilative powers of the host nation or the characteristics of the minority population, and more to do with the relatively good match in religiosity.