Where Did Earth's Water and Ammonia Come From?

Meteorites likely brought water here, but it didn't stick around until after our planet cooled off. 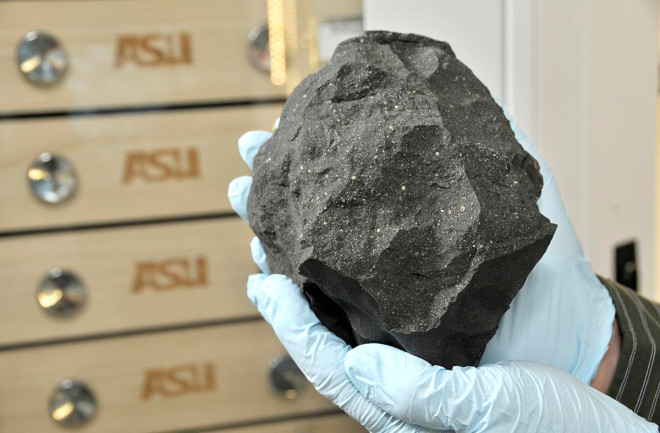 Carbonaceous chondrites may have brought water to Earth. | Ernie Mastroianni/Discover

Q: Supernovas produce most of the heavy elements, but what about non-element molecules, like water and ammonia and many others we find naturally on Earth? And how did these molecules survive the incredible temperatures and impacts when the planet was forming? — Terry Guerrant, via e-mail

A: Most scientists believe that stable molecules like water and ammonia weren’t originally produced on Earth. Instead, they arrived from space within the first 700 million years of Earth’s existence. But how and when this happened still isn’t clear.

When Earth formed about 4.6 billion years ago, water was already present in some form in the universe. It coalesced through gravitational forces just like how larger structures — such as rocks, crystals and Earth itself — were forming.

Some of that water was contained as ice in primitive meteorites called carbonaceous chondrites. In 2013 scientists compared the relative amounts of hydrogen and a hydrogen isotope present in Earth’s water with levels present in the remnants of ice in these meteorites. Like a chemical fingerprint, the isotopic ratio between Earth’s samples and the carbonaceous chondrites’ samples matched. This find suggested meteorites that struck Earth during a period of heavy bombardment, between 3.8 billion and 4 billion years ago, likely introduced water. The arrival mechanism for other non-element molecules, like ammonia, is probably similar.

How did water “survive” the early heat? It didn’t. It would’ve evaporated back into space until Earth cooled sufficiently. Exactly when it cooled enough to become water-friendly is still under debate.

Have a question? Email Ask@DiscoverMagazine.com