What Is the Most Dangerous Volcanic Hazard? 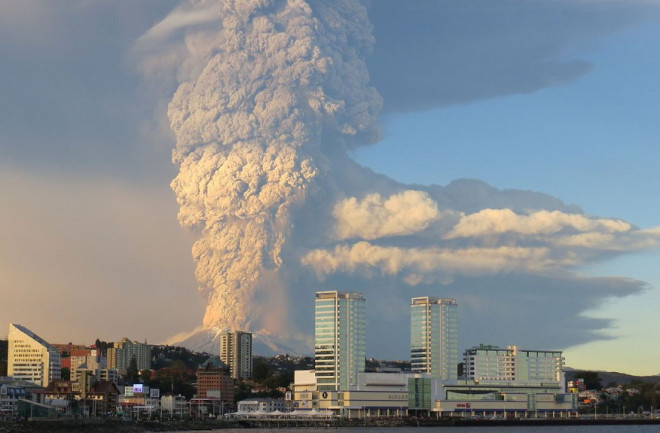 The 2015 eruption of Calbuco in Chile, with the city of Puerto Montt in the foreground. Wikimedia Commons. Volcanoes can be pretty dangerous. Thankfully, we've gotten better over the last half century at getting people out of the way of volcanic hazards. However, many hundreds of millions of people still live close enough to volcanoes to feel the impact of an eruption -- especially when the volcano decides to have a spectacular eruption. There are a lot of misconceptions out there about what the most dangerous aspects of a volcanic eruption might be. I think many people picture lava flows cascading down the sides of a volcano and imagine that the searing rivers of molten rock are what will do you in. Well, they're right in one respect: stay in the path of a lava flow and you will likely cease being alive. But luckily, lava flows are actually pretty easy to avoid as they move rather slowly, rarely up to ~30 km/hr (20 mph) but more likely less than 8 km/hr (5 mph). You can probably out-walk most lava flows. So, what is it that makes volcanoes so deadly if it isn't the copious volumes of lava they can produce? Here's a little countdown of what I think are the most dangerous volcanic hazards based on the number of deaths associated with them, the potential for damage to houses and infrastructure, the frequency with which they occur and the difficulty of avoiding them. 5. Lava Flows: After all that pre-amble about lava flows, here they are! Though lava flows may not cause many fatalities, the potential damage to infrastructure and homes is very high. Lava flows are also very common at certain types of volcanoes, so with that combination of frequency and destructiveness, we need to take lava flows seriously. The 2018 eruption at Kīlauea is a perfect example, where there were no fatalities but over 700 homes destroyed. However, the lava can be deadly in rare cases. This can happen when the composition and temperature of the lava means it is especially runny, so it travels fast. An eruption of Nyiragongo in the Democratic Republic of the Congo produced lava flows that moved through the city of Goma killing dozens.

Lava flow from the 2018 eruption of Kīlauea in Hawaii. USGS/HVO. 4. Tsunamis: Tsunamis can be generated by geologic events other than eruptions -- in fact, they are more common with earthquakes. However, volcanoes can produce these deadly ocean waves when part of the volcano collapses during an eruption. Most recently, the 2018 eruption of Anak Krakatau killed over 420 people when most of the relatively-small cinder cone collapsed during an eruption. The predecessor to Anak Krakatau -- Krakatau itself -- generated a massive 30-m tsunami when it collapsed into a caldera in 1883. That eruption and tsunami killed over 35,000 people along the Sunda Strait in Indonesia. Other volcanoes, like Unzen in Japan, have had deadly tsunamis as well.

Anak Krakatau not long after the 2018 collapse that generated a deadly tsunami. Alex Gerst - ISS/ESA. 3. Lahars (also known as volcanic mudflows): You might be tempted to think mudflows couldn't be too deadly, but these rivers of volcanic (and other) debris generated by snow and ice melt during an eruption or heavy precipitation on a volcano are very hazardous. Lahars have the consistency of wet cement and they flow at tens of kilometers per hour down river valleys. Many times, that allows for enough forewarning to escape if you are downriver, but the 1985 eruption of Nevado del Ruiz in Colombia proved that a lack of preparation can lead to over 20,000 deaths. Due to their density, lahars can destroy infrastructure and homes and bury towns (and people) rapidly. They can happen without an eruption, such as when old volcanic debris gets mobilized during heavy rain or snow melt. That's why volcanoes like Mt. Rainier have lahar warning systems for the towns downslope from the volcano.

The town of Chaitén buried by lahar deposits from the 2008 eruption of Chaitén in Chile. Flickr. 2. Ash Fall: It might look like snow, but volcanic ash is nasty. It's made of tiny pieces of volcanic glass and other debris, so if you can imagine inhaling broken glass, well, you get the idea. It can be carried for potentially thousands of kilometers depending on the size of the eruption and winds. When it piles up, the ash can destroy roofs, contaminate water, annihilate vegetation and even block out the sun. If you are unlucky enough to breathe in the ash, it will coat the inside of your lungs and cut them up, people can die from the silica cement in their lungs and/or from more or less drowning in those fluids. Volcanic ash in the atmosphere can disable jet engines, so flying through even dilute ash clouds is a bad idea. Ash fall can be persistent as well, with a volcano producing ash that might accumulate a few millimeters or centimeters thick for months to years -- and as I mentioned with lahars, you can get the ash moving again with heavy rains or even with winds.

Buildings destroyed by ash fall at Clark Air Base in the Philippines during the 1991 eruption of Pinatubo. USGS. 1 Pyroclastic Flows (also known as hot ash flows or pyroclastic density currents): If you're looking for that one-two punch of destruction and potential for major fatalities, it is hard to beat a pyroclastic flow. Imagine a cloud of hot volcanic gases and debris that ranges in size from tiny specks of ash to massive boulders, all moving down a volcano at over 300 km/hr (190 mph) at a temperature over 600ºC. You, your city, everything is toast. Some of the deadliest pyroclastic flows buried Pompeii in 79 A.D., wiped St. Pierre off the map during the 1902 eruption of Pelée, erased towns surrounding El Chichón in Mexico in 1982, snapped enormous trees as they flattened forest at Mount St. Helens in 1980 and buried entire valleys during the 1912 eruption of Novarupta in Alaska and 1991 eruption of Pinatubo. They are landscape-altering events that occur in mere moments. If you don't get buried in the hot debris, you'll be sizzled to death in the volcanic gases or choke on the ash.

Pyroclastic flow from Mount St. Helens in June 1980. USGS. Pyroclastic flows are generated a number of ways: a collapsing ash column from an eruption, a collapsing lava dome at the top of a volcano or an explosive eruption that moves sideways. Some recent research on pyroclastic flows suggests that they move so far and fast because they travel on a bed of air like a hovercraft. This allows them to travel tens of kilometers from the volcano and "leap" over obstacles. Even seasoned volcanologists can be caught off guard by unpredictable travel of pyroclastic flows. A 1991 eruption of Unzen killed Maurice and Katja Krafft, famed volcano documentarians, along with USGS volcanologist Harry Glicken. Pyroclastic flows need to be taken seriously because you will not survive being in the path of these clouds of volcanic fury.