A new study suggests there's a 10 percent chance someone will be killed by falling space junk in the next decade. But there are steps space agencies can take to lower that risk. 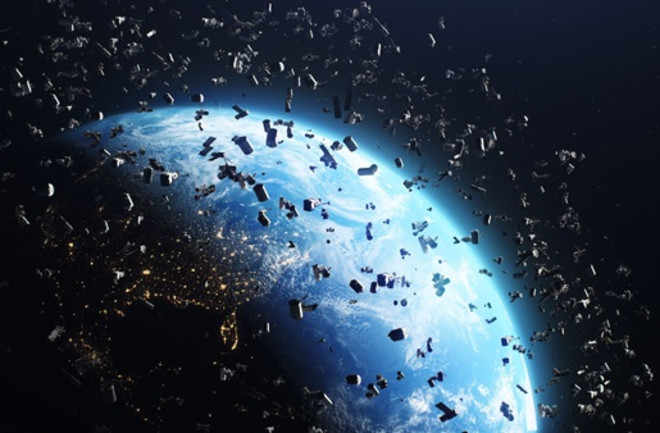 It sounds like something out of a cartoon. A chunk of metal separates from a rocket or satellite, reenters the atmosphere, and then plummets to Earth. It strikes whatever happens to be in its path — whether open water, a grassy prairie, or a city bus.

The idea seems outlandish, but space debris is a growing problem. In late July 2022, a booster for China’s Long March 5B rocket reentered the atmosphere and crashed into the Sulu Sea near the Philippines. And China isn’t alone when it comes to producing potentially hazardous space junk.

The unceasing global proliferation of satellites means there are now more human-made objects in space than ever before. And new research predicts there is a concerning chance someone could be killed by falling space debris in the next decade.

How’s the Air up There?

Outer space is swimming in junk: There are hundreds of thousands of teeny objects smaller than 0.4 inches (1 centimeter) that reenter the atmosphere and fall to Earth.

“That debris produces a constant ‘rain’ of objects coming back to Earth that we don’t track. It comes back all over the Earth,” Marlon Sorge, executive director of The Aerospace Corporation's Center for Orbital and Reentry Debris Studies, tells Astronomy. However, “because these debris are so small,” he says, “even if they make it down to the Earth’s surface, they are not dangerous to people on the ground and will go unnoticed.”

Still, larger pieces of debris do reenter the atmosphere on a regular basis.

One ton of space debris enters the atmosphere each week. But Sorge stresses that rate is an average, which means there could be months of inactivity followed by several large objects reentering our atmosphere over a short period of time.

Yet just because an object enters the atmosphere doesn’t mean it will barrel into Earth’s surface. Aerospace’s debris database tracks space junk, and Sorge says as much as 60 percent of space junk disintegrates during reentry. Of the objects that make it through the atmosphere, most splash down in the ocean away from populated areas. Still, there is more space debris in the atmosphere now than ever before.

In 2021, for example, more than 1,900 space objects were registered for the first time with The United Nations’ outer space objects index. Most of these space objects are satellites, which are increasingly being used for communications and weather tracking.

Fortunately, satellites are smaller now than they were in the past, and Sorge says they are being designed to produce less and less space debris. But the sheer quantity of satellites in orbit means the problem of space debris must be addressed.

What Are the Odds of Being Killed by Space Junk?

What are the chances someone could be killed by a hunk of space junk falling from the sky? In a 2022 study in Nature Astronomy, a team of researchers at the University of British Columbia sought to find out.

They turned to an open database that logs information about objects that are still in orbit, as well as ones that have deorbited and reentered the atmosphere. They found that in the past three decades, more than 1,500 rocket bodies have reentered our atmosphere. And most of them — more than 70 percent — were uncontrolled reentries.

The team then calculated the probability of one of these rocket bodies reentering the atmosphere (like China’s Long March 5B recently did) and actually hitting someone. They concluded that over course of the next decade, there is a 10 percent chance of a casualty being caused by such falling space debris.

“Our estimates are conservative. It’s probably worse than that,” says Aaron Boley, a professor at The University of British Columbia and one of the study’s authors.

Scientists aren’t always certain how a piece of space junk will reenter the atmosphere, or the path it will take. These objects are tumbling, which means their ballistics are not fully known to the people tracking them. And variations in the atmosphere can change the air resistance they encounter.

“The problem is you don’t know where it is going to reenter until an orbit or two before it reenters,” Boley says. “You can do your absolute best measurements, but the fact is that you have this object that is tumbling.”

The path an object takes as it reenters the atmosphere may be unpredictable. But scientists say these uncontrolled reentries can be better handled or altogether avoided. For instance, some parts are designed to break off rocket boosters, and researchers find their trajectories can be roughly guided to less populated part of the world.

A 2021 study in Advances in Space Research examined reentry models to determine how casualty risk could be minimized by considering the orbit an object follows when it first reenters the atmosphere.

“Where the debris falls very much depends on the orbit it has at the beginning of the reentry,” says Inna Sharf, a professor at McGill University in Montreal and one of the study’s authors. Important orbital factors include how circular the orbit is and where it intersects Earth’s equatorial plane.

“In our paper, one of the things we demonstrated was that by giving the debris a small but timely impulse, for example, by firing a thruster on the debris for a very short period, we can easily affect where the debris falls on Earth,” Sharf says.

Currently, space debris is not falling evenly on our planet. The Southern Hemisphere is more at risk of falling debris, even though countries in the Northern Hemisphere are more responsible for the debris.

“Many states actually have this practice of not just abandoning their rockets in orbit but having waivers for when their individual rocket launches do not meet their own guidelines,” Boley says. For example, most U.S. rocket launches in the past few decades have waived requirements for controlled reentry. Boley says this lax attitude is due to the relatively small risk of injury, which has made space organizations complacent about taking proper precautions.

But with space organizations around the world each feeling complacent, Boley warns the problem has snowballed.

“It’s not just one state, and it’s a cumulative problem,” he says. “We have this idea of individual rocket launches having a low threshold, but the cumulative effect of all these is not small at all.”

Space agencies can make more of an effort to reduce the amount of space debris that reenters the atmosphere. Rockets can now be designed with re-ignitable engines that allow them to be deposited in a controlled manner. This means that a spacecraft could dump a booster over, say, Point Nemo, which is the spot in the ocean farthest from land, Boley says.

Controlling reentry or designing a booster that breaks apart before it enters the atmosphere admittedly requires extra time, effort, and money. But Boley says space agencies, including the U.S., need to stop granting themselves waivers that limit the value of thoughtful precautions. He also says that establishing global standards could help get other countries on the same page.

“As we expand into space, we need to realize there needs to be broad cooperation,” Boley says. “There are implications for the rest of the world that need to be taken into account.”