Welcome to the Multiverse

Could our universe be just one of a multitude, each with its own reality? It may sound like fiction, but there is hard science behind this outlandish idea. 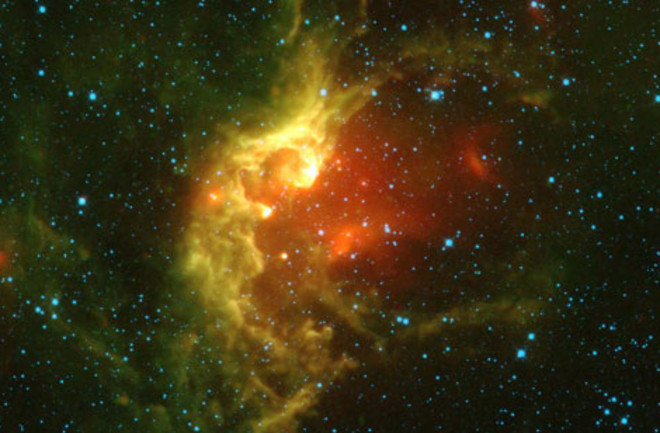 The Wizard nebula, a star-forming region 7,000 light-years away. If our universe is part of a multiverse, it might have near-twins out there, along with other drastically different universes. (Credit: NASA/JPL-Caltech/UCLA)

Theoretical cosmologist isn’t one of the more hazardous occupations of the modern world. The big risks include jet lag, caffeine overdose, and possibly carpal tunnel syndrome. It wasn’t always so. On February 17, 1600, Giordano Bruno, a mathematician and Dominican friar, was stripped naked and driven through the streets of Rome. Then he was tied to a stake in the Campo de’ Fiori and burned to death. The records of Bruno’s long prosecution by the Inquisition have been lost, but one of his major heresies was cosmological. He advocated that other stars were like our sun, and that they could each support planets teeming with life. Orthodox thought of the time preferred to think that Earth and humanity were unique.

These days, cosmologists like me may be safer, but our ideas have grown only more radical. One of the most controversial but widely discussed concepts in the field resembles a hugely amplified version of Bruno’s cosmology: the idea that the thing we call “the universe” is just one of an infinite number of regions in a much larger universe of universes, or multiverse. A big focus of my own research asks whether a multiverse can help explain the arrow of time.

Also like Bruno, cosmologists are reaching far beyond what observational evidence can tell them. At the time of Bruno’s death, Galileo had not yet turned the very first telescope upward to the stars. Today, nobody has looked beyond the boundaries of the known universe. In fact, such a far-reaching vision seems impossible by definition.

The extent of what astronomers can see is frustratingly limited by the speed of light: one light-year (about six trillion miles) per year. When we look far away, we are looking into the past, and that past doesn’t stretch forever. Everything we see emerged 13.7 billion years ago from the hot, dense state known as the Big Bang, so we cannot observe anything more than 13.7 billion light-years away. If there is something so far away that its light couldn’t have traveled from there to here in the time since the Big Bang, we cannot observe it.

Here we are not talking about disconnected universes, but rather what we cosmologists call pocket universes. Conditions are fairly uniform within any region but vary greatly from region to region. One pocket far away might be similar to our universe, but the mass of the electron might be a bit different. Even such a small change could scramble the rules of chemistry, not to mention biology. Another region might be utterly strange, with seven dimensions of space, say, and 29 forces of nature. All together, a bewildering variety of universes, each with its own laws of physics.

For all the parallels, modern physicists are quite unlike Bruno in one crucial way. They weren’t led to this picture by pantheistic mystical philosophizing. Rather, they have been forced into it — kicking and screaming, in many cases — by other theoretical ideas, especially cosmic inflation and string theory.

Inflation was conceived in 1980 by MIT physicist Alan Guth to explain why the observable universe is so flat and smooth, with galaxies distributed evenly throughout space and with almost exactly the right amount of mass to balance out its expansion. The idea is that immediately after the Big Bang, the universe was trapped in a state called a false vacuum, in which empty space was filled with an incredible amount of energy. The false vacuum was unstable, like a radioactive atom waiting to decay. Eventually it broke down into the ordinary vacuum of space as we know it, releasing tremendous amounts of matter and radiation. In the process, an extremely small patch of space inflated to enormous size, evening out any irregularities and giving rise to the universe we see today.

But unlike a radioactive atom, which either decays or doesn’t, the false vacuum can decay in some places but not in others. That means there can be regions where inflation continues forever. Suppose a tiny inflating region grows to tremendous size, and 90 percent of it converts into matter and radiation. The remaining 10 percent then grows to an even bigger size; 90 percent of that decays, and the cycle repeats indefinitely. There are regions like our own, where inflation has long since ended, but also places where inflation is still going on, creating yet more regions, each forming a pocket universe.

That’s where the multiverse comes from. It is not that cosmologists are so fond of all those universes; it’s that we are fond of inflation, because inflation explains the observed properties of the cosmos with great precision. But many versions of inflation theory also predict an infinite number of universes, like it or not.

In short, string theory predicts that the laws of physics can take on an enormous variety of forms, and inflation can create an infinite number of pocket universes. So the different laws of physics predicted by string theory might not be just hypothetical. They might really be out there somewhere among the countless parts of the multiverse. This is not a situation that cosmologists dreamed up in a flight of fancy; it is something we were led to by trying to solve problems right here in the universe we observe. The question is, now that the multiverse is here, what are we going to do about it?

A lot of people, both inside and outside the scientific community, are viscerally opposed to the idea of other universes, for the simple reason that we can’t observe them — at least as far as we know. It’s possible that another universe bumped into ours early on and left a detectable signature in the cosmic background radiation; cosmologists are actively looking. But the multiverse might be impossible to test directly. Even if such a theory were true, the worry goes, how would we ever know? Is it scientific to even talk about it?

These concerns stem from an overly simple demarcation between science and nonscience. Science depends on being able to observe something, but not necessarily everything, predicted by a theory. It’s a mistake to think of the multiverse as a theory, invented by desperate physicists at the end of their imaginative ropes. The multiverse is a prediction of certain theories­ — most notably, of inflation plus string theory. The question is not whether we will ever be able to see other universes; it’s whether we will ever be able to test the theories that predict they exist.

Imagine a tribe of primitive cos­mol­ogists living on a planet perpetually covered with clouds. They cannot see the sky, so all they can do is speculate. Most of them might be content to imagine that their gray atmosphere stretches on forever, but others start imagining huge numbers of other planets, many very different from their own. These folks go so far as to suggest that their picture helps explain why their own planet is so hospitable: On the planets that aren’t so pleasant, there aren’t any cosmologists asking that question.

This scenario is much like our current situation. We find ourselves surrounded by an opaque barrier past which we can’t see — the Big Bang. The distant universe might be uniform, or it might be full of different universes scattered throughout space. The conditions of our local environment might be the unique consequence of fundamental laws of physics, or they might just be one possibility out of a staggering number.

Right now we don’t know, and that’s fine. That’s how science works; the fun questions are the ones we can’t yet answer. The proper scientific approach is to take every reasonable possibility seriously, no matter how heretical it may seem, and to work as hard as we can to match our theoretical speculations to the cold data of our experiments.

Sean Carroll is a theoretical physicist at Caltech focusing on inflation and the arrow of time. He also blogs at Cosmic Variance.