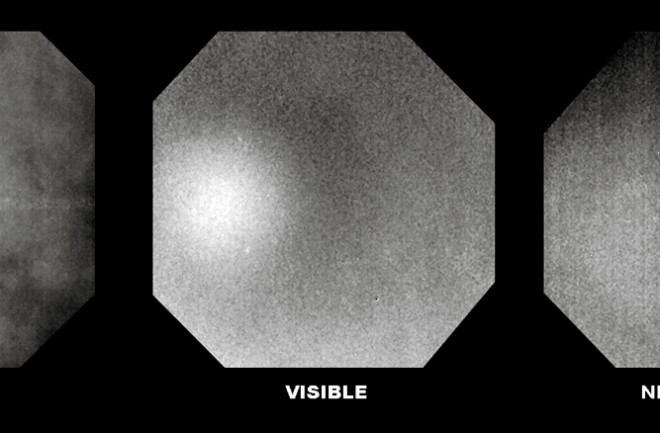 The color image of the glory (top) is a composite of these three photos, which were taken at different wavelengths of light during the phenomenon. | ESA/MPS/DLR/IDA

Sign up for our email newsletter for the latest science news
In March, the Venus Express probe released this false-color image of a glory in Venus’ atmosphere, measuring about 750 miles across. | ESA/MPS/DLR/IDA

That rainbow circle of light you might glimpse in the sky out an airplane window is known as a glory. For the first time, astronomers have fully imaged one on another planet.

The color image of the glory (top) is a composite of these three photos, which were taken at different wavelengths of light during the phenomenon. | ESA/MPS/DLR/IDA

Glories occur at a point in the sky opposite the sun when light scatters off tiny liquid particles, usually water in our clouds, refracting into rings. After analyzing this view of a glory on Venus — combining three wavelengths into a false-color image — astronomers were surprised to learn that the planet’s clouds aren’t pure sulfuric acid after all, but may include iron chloride and pure sulfur.