The newly-discovered Nadir Cater in West Africa may hold proof that two asteroids caused the end of the Cretaceous Period. 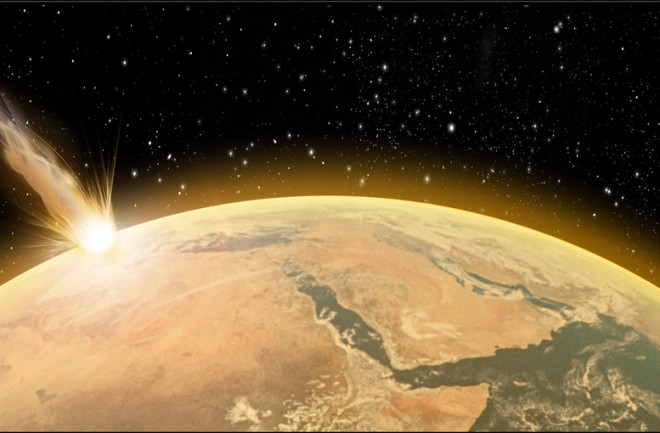 Whirling through space over 65 million years ago, an asteroid, six miles in diameter, collided with Earth, causing the giant Chicxulub Crater and a mass extinction level event. Eventually, the crater was found in the late 1970s and positively identified in the 1990s. Scientists believe that this was the asteroid that ended the Cretaceous Period and wiped out 75 percent of life on the planet. However, what if this wasn’t the only asteroid to hit Earth that day?

Recent findings on the Guinea Plateau off the shore of West Africa have identified a second possible impact crater that could have aided in ending the Cretaceous Period. Using a seismic reflection data set — a method that sends acoustic waves down a water column to map the seafloor — researchers may have identified another impact creator just over five miles (8.5 km) wide.

Buried under about 980-1300 feet (300-400 meters) of Paleogene Period sediment, the newly-found Nadir Crater dates line up with that of the Chicxulub Crater, according to Uisdean Nicholson of Heriot-Watt University.

(Data courtesy of the Republic of Guinea and TGS) (a) regional map showing the location of the Nadir Crater on the Guinea Plateau, offshore West Africa. Other important seabed features are also highlighted, including the Nadir Seamount after which the crater is named. (b and c): regional seismic cross sections across the Guinea Plateau, showing the age of the sedimentary units across the plateau and the location of the Nadir Crater and Nadir Seamount.

Researchers suggest that the craters at Nadir and Chicxulub could've been caused by the same asteroid that broke apart in Earth’s atmosphere. If actually caused by an asteroid strike, it's also possible that the Nadir Crater may have come from a second asteroid in an asteroid cluster.

According to Nicholson and colleagues, the analyzed 2D seismic data show promising signs of an impact crater such as an elevated rim, a central uplift area and badly deformed rock beneath the crater. Other models show that the asteroid was about 1300 feet wide (400 meters) and would have crashed into 2600 feet (800 meters) of water, likely causing tsunamis and possibly releasing greenhouse gas emissions from black shale deposits.