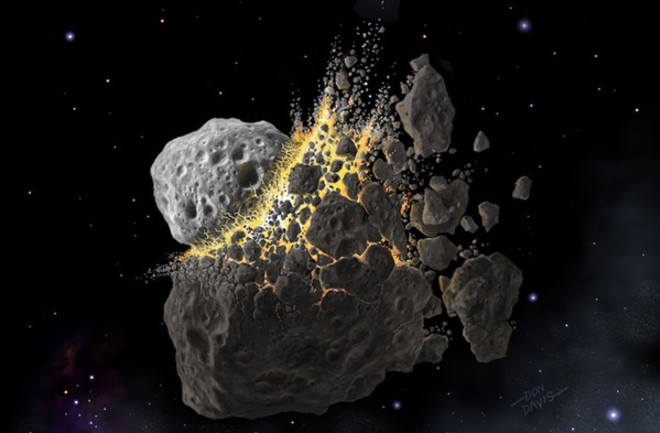 This artist’s concept captures the catastrophic collision that destroyed the parent body, which was bigger than any known asteroid break-up in the past 3 billion years. (Credit: Don Davis/Southwest Research Institute.)

A giant collision between two asteroids may have triggered a global ice age that hit Earth some 466 million years ago. The cosmic crash — which took place between Mars and Jupiter and destroyed an asteroid some 93 miles (150 km) wide — created a thick plume of dust that spread throughout the inner solar system.

This massive reservoir of debris then continually rained down on our planet as our orbit crossed through it over the span of some 2 million years, slowly changing Earth’s overall climate.

According to the new study, published Wednesday in Science Advances, the timing of the suspected global dust storm lines up pretty well with a particularly chilly period in Earth’s history, when a drop in temperatures is thought to have triggered an explosion of new species. In fact, “the timing appears to be perfect,” said lead author Birger Schmitz of Lund University in a press release.

Although Earth is constantly bombarded by small particles from outer space, the shear amount of asteroid powder that entered our planet’s atmosphere after the collision puts our current daily dose of dust to shame.

“Normally, Earth gains about 40,000 tons of extraterrestrial material every year,” said co-author Philipp Heck of the University of Chicago. “Imagine multiplying that by a factor of 1,000 or 10,000.” That works out to as much as 400 million tons of space dust falling into Earth’s atmosphere every year — which happens to be roughly equal to how much plastic humans produced in 2015.

In order to carry out the study, researchers searched for traces of extraterrestrial dust in 466-million-year-old rocks. By uncovering promising samples and then treating the rocks with stone-eating acid, the researchers were left with only the space dust.

“We studied extraterrestrial matter — meteorites and micrometeorites — in the sedimentary record of Earth, meaning rocks that were once sea floor,” said Heck. “And then we extracted the extraterrestrial matter to discover what it was and where it came from.” Specifically, the researchers found much of the dust came from the catastrophic destruction of the L-chondrite parent body (LCPB), the largest known breakup of any asteroid in the past 3 billion years.

After analyzing the dust samples to confirm their origin, the researchers then set out to understand the impact such a huge amount of atmospheric dust would have had on ancient Earth’s climate.

According to the study, as the dust accumulated in Earth’s atmosphere, it filtered out sunlight streaming to the surface. This would have led to an extended period of cooling for our planet — which previous research has already confirmed happened during the mid-Ordovician period. Researchers have shown that during this time, Earth’s sea level dramatically fell, indicating much of the planet’s water was instead locked up as ice. But because the temperatures during the mid-Ordovician dropped gradually, the researchers say, the dust-induced cooling still gave life plenty of time to adapt.

Although this might lead one to conclude that putting something like asteroid dust — or a similar terrestrial substitute — into the atmosphere of Earth may be a good way to combat our current battle with global warming, the authors warn of the danger of taking that route. “If something goes wrong,” said Heck, “things could become worse than before.”

But that doesn’t mean we shouldn’t be debating all feasible options.

“We’re experiencing global warming, it’s undeniable,” says Heck. “And we need to think about how we can prevent catastrophic consequences, or minimize them. Any idea that’s reasonable should be explored.”