Physicists have created a device that binds photons together to form "light molecules." 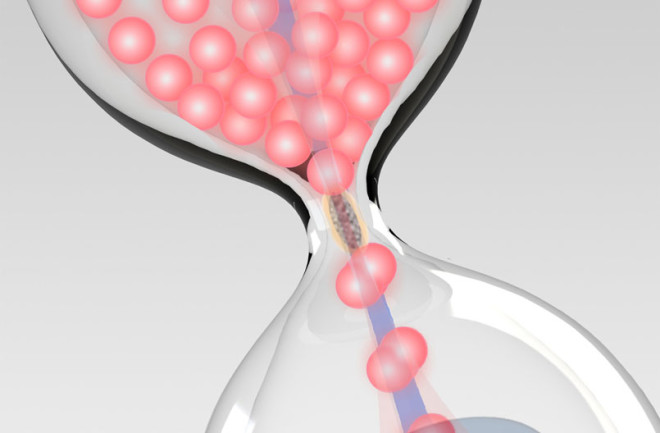 Physicists have created a device (illustrated here) that can bind photons together to form “light molecules.” | Ofer Firstenberg and Yoav Sterman

In a lab in Cambridge, Mass., a vacuum chamber the size of a shoebox has made history. Here, Harvard physicist Ofer Firstenberg has created a new form of matter: a pair of photons, stuck together. The “light molecule” is, potentially, the building block of technology that uses some form of tangible light — from light sculptures to lightsabers to (perhaps more practically) computers that can perform vastly more complex calculations than today’s machines.

Unlike atoms and the matter they’re made of, two photons on a collision course will simply pass through one another, with no interaction. To get photons to stick together, a first step for all the above technologies, Firstenberg and his team used a setup they’ve spent years perfecting. They rigged a specialized metal box with a laser on one side to let in one photon at a time. The first photon slips into a cloud of rubidium atoms, which were chosen because they can easily be cooled to the extreme point at which they are nearly motionless. A second photon then enters the cloud. The two photons end up sticking together and move forward just like a two-atom molecule.

The interaction between the two allows one photon to alter the quantum information carried by the other by changing its properties (such as momentum and polarization). This kind of control over light will help researchers working on quantum computers, the next-generation machines that use photons instead of electrons in their computations. These can take advantage of the wacky laws of quantum mechanics, resulting in devices that could leave today’s computers in the dust.

But that’s a long way off. For now, Firstenberg and his colleagues are slowly building their understanding of the strange, new matter and how it operates by taking the next logical step: They’re trying to make a light molecule composed of three photons.

[This article originally appeared in print as "How to Make Light Matter."]