Tolerance of extramarital sex by sex

My girlfriend’s theory about this, which makes sense to me, is that as women’s labor market opportunities have improved their dependency on husbands for economic security has declined and, in turn, their willingness to put up with misbehavior has gone down. Looking at a gender breakdown of responses might shed some light on this, but I can’t figure out how to work the General Social Survey website.

He's talking about a chart which shows decline in tolerance of extramarital sex by education: 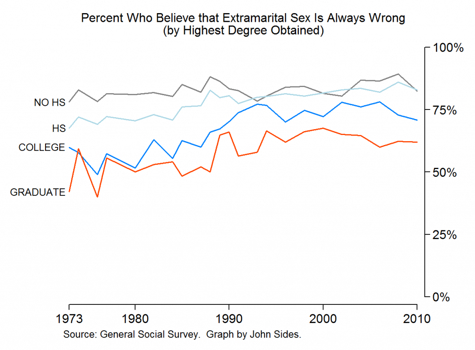 I just replicated but broke it down by male and female: