Seeing is believing — but the science behind this trick is more than meets the eye. 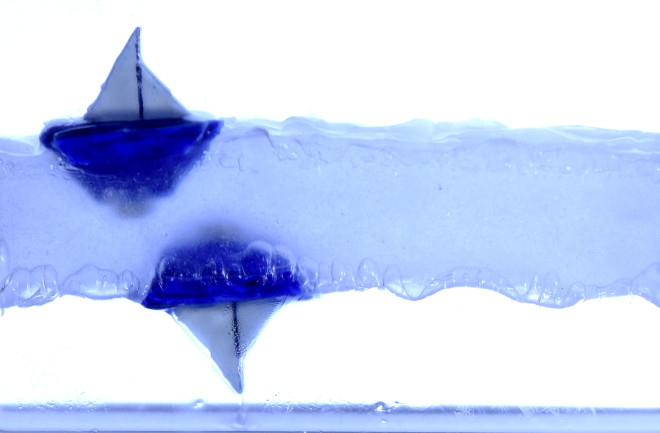 It might look like a magic trick, or an optical illusion of sorts. But no, your eyes don’t deceive you — that little boat you see above does, indeed, float upside down.

A good magician doesn’t reveal their tricks. Scientists, however, do the exact opposite. A team of researchers in France detail this phenomenon in a new study published today in Nature, showing how vigorously shaking a container full of silicone oil or glycerol can create a levitating pocket of liquid that allows these small boats to float upside down.

“These phenomena are so counter-intuitive,” says Emmanuel Fort, a coauthor on the study. “People who came to see the experiment in the lab thought it was a trick or thought it was science fiction,” like the levitating pools in the movie Tomorrowland. And the researchers themselves were also taken aback by the sheer strangeness of it all. Fort, a professor at ESPCI Paris and a researcher at the Langevin Institute, describes the research as “a succession of surprises and astonishment.”

This actually isn’t the first time researchers have been able to make liquid float. In fact, it’s been explored in several studies in the past, using different types of liquids and techniques to make it levitate.

Normally, a denser medium will sink below a less dense one; for example, when water boils in a pot, air bubbles rise instead of sink, as gas is less dense than liquid. Or, think of how oil sinks when it’s poured into a container of water, because oil is more viscous. Even the simple act of pouring milk into your cereal bowl is a testament to this omnipresent rule — the liquid will fall, because the air around it is less dense.

So, under typical circumstances, the oil or glycerol that the researchers used would fall, because the air in the container is less dense. But when a vigorous vibration is applied to the container, the liquid does something peculiar — it stops falling and defies gravity. Vibrations achieve this by compressing the air below the liquid so that the liquid can’t fall.

Similarly, heat and magnetic fields can make liquid behave in unexpected ways. But Fort says the vibration method is easier to implement and more versatile, and effectively creates the eye-catching trick of making liquid float in a container.

Still, “there are very few experimental observations in the literature,” he notes. In this study, the group was able to float half a liter, or four cups, of liquid. “We were just limited by the power of the shaker,” he says.

Vibrations can stabilize solid objects, too. One of the most poignant examples is that of an inverted pendulum, called a Kapitza. When subjected to vigorous shaking, it can point toward the sky instead of swinging back down.

It was the Kapitza pendulum that first caught Fort’s eye after a seminar he attended. “I thought we could do [the same] with a liquid,” he says. He then set out to test that theory, with the help of study coauthors Benjamin Apffel, Filip Novkoski and Antonin Eddi.

Getting the liquid to levitate, however, was a challenge that took some time to master, Fort says. Once the team figured out the proper configurations, they tried putting objects in the liquid, such as beads, and later small boats. Sure enough, through shaking, they were able to make the objects float both right side up and upside down.

Normally, a boat flipped on its head is a bad thing. But these 3D-printed vessels didn't sink. Quite the opposite, in fact.

Made out of lightweight plastic, the research team’s watercrafts of choice had small magnets to move them around the tank. (The magnets didn’t interfere with floatation though — they were simply used to place the boats in the right position).

Because the liquid becomes stable through shaking, the boats were able to float buoyantly, just like they would on a pond. The vessels were light enough to sit on the surface of the liquid, but Fort says theoretically any kind of object could float in the levitating layer, as long as it’s less dense than the oil or glycerol.

There are still elements of these strange phenomena that Fort and his colleagues want to explore further. For example, he says, they'd like to try to levitate two different types of liquid in the same container. Or, maybe just use more liquid in a larger vessel.

“From the model, there is no limit in size provided you shake enough,” Fort says. “The only constraint is viscosity.” Theoretically, that means the team could make a massive, pool-sized model to put their findings to the test. Except that pool wouldn’t be filled with water or oil, since they aren’t viscous enough to levitate in a massive container. Rather, Fort says, something thick like syrup would likely do the trick. A sticky prospect, but possible, thanks to physics.